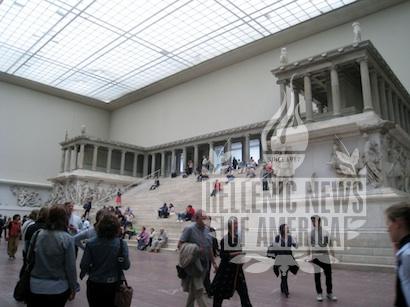 “Absolutely everyone on my Kontiki Tour was heading to one place in Berlin: the Pergamon Museum which is the best Ancient Greek Museum in Europe,” said Despina Siolas, MD/Ph.D. “It is amazing how all the museums of Germany are East of the Brandenburg Bridge.” Without realizing it, she stumbled on one of the reasons for the reunification of East and West Germany. East Berlin has the culture of Western civilization, acquired by Germany’s intellectuals and princes for generations. A West Germany needed the East with these important museums for a united country.

“My family is from Pergamon, Asia Minor,” said the late Jimmy Tsoros in the 1980’s. He was my parents’ patrioti (friends from their region).“The entire city lies in a German museum. But you must go to Germany to see Greek heritage.” He did not explain that one had to pass through the Berlin Wall and enter communist occupied territory to see our Greek/Anatolian heritage.

In 2010, Turkey demanded the return of the Pergamon treasure. The Greeks are demanding the return of the Elgin Marbles from the British Museum, as well. In a later visit to the Izmir Museum through Sunrise Tours of Chios, the tourist and her friend, Susan Atzchiger visited the Izmir Museum of History and Art located at Kulturpark. A replica of the Altar of Pergamon (Pergamon Sunagi) is on exhibit. The exhibit states in English, Turkish and German “The Altar of Pergamum, The Museum of Pergamum, Berlin.” The tragedy of the Greek cities of Western Anatolia is that their culture is not learned as part of our Greek history in the national and international Greek. They are part of the Turkish Republic. 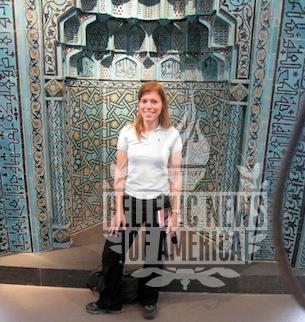 Pergamon, Smyrna and other Greek Cities of Western Anatolia had their roots in Greece. The Ionians from Athens settled in Smyrna. This city triggered the “Athens Miracle” that is the basis of western civilization. If Asia Minor (western Anatolia) was merged into Greece in 1919, history would be different. Today, one must be a graduate student with a knowledge of Modern Greek to learn and research on the facts of the Asia Minor Greek cities.

The main attraction of the Pergamon Museum is the Pergamon Altar (2nd century B.C.). “At Pergamon is a great marble altar 40 feet high with remarkable statues and the entire is surrounded by a Battle of the Giants,” according to a quote by ancient Roman Ampelius in “The Pergamon Altar” book by Philipp von Zabern. The ancient city was located in northwestern Anatolia. The city under the Attalid dynasty became important during the Hellenistic period. They remodeled the Acropolis of Pergamon after the Acropolis in Athens. The altar symbolically celebrated the triumph of Pergamon in the newly conquered lands of Anatolia. Pergamon was a second Athens, located far from the Greece mainland, as the legitimate continuation of Greek civilization.

“In 197 B.C., the city (Izmir) was taken under the control of the Kingdom of Pergamon in 197 B.C.,” according to the “Izmir Centre Museums and Ruins” travel book published by the Izmir Provincial Directorate of Culture and Tourism. “The King of Pergamon, Attalos III, left his kingdom to the Roman Empire through a will…..”

Carl Humann, an engineer, discovered and excavated the Pergamon site. The purpose was to establish Berlin as a rival to the British Museum in original works of Greek art. The five institutions of Altes Museum, Neues Museum, Alte Natioonalgalerie, Bode-Museum and Pergamonmuseum) is situated between the river Spree and Kupfergraben. Forming an outstanding museum island. In 1999, it was officially declared a World cultural Heritage Site by UNESCO. The Museum Island of Berlin stands out as a universal site of human culture. 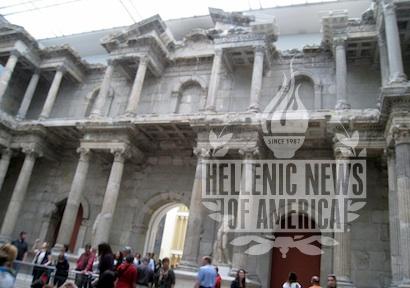 The Pergamon museum was built from 1910-1930 by Ludwig Hoffman, according to designs by Alfred Messel It was the last of the five museums erected on the Museumsinsel, Berlin, as stated in the “Pergamonmuseum” brochure. The three wings have the following collections: Collection of Classical Antiquities with monumental reconstructions of Greek and Roman architecture; Museum of the Ancient Near East and the Museum of Islamic Art. The museum is internationally known for its unique reconstructions of ancient architecture. The Werkgemeinschaft Pergamonmuseum is modernizing under the Master Plan for the Museumsinsel.

My article researches the first museum of Classical Antiquities. The Collection dates back to the time of the princes of Brandenburg. It was founded as a museum in 1830. Excavations in Greece and Asia Minor made the collection one of the most important in the world. The Collection of Classical Antiquities is in three separate locations. Minor Arts and sculptures are in the Atles Museum. Large architectural settings from Greek and Roman periods are on display in the Pergamonmuseum.

The Pergamon Altar (170 B.C) is a sculptural frieze. It is one of the masterpieces of Hellenistic art. It depicts the battle of the gods against the giants. A highlight of Roman architecture is the Market Gate of Miletus from the 2nd century A.D. Monuments from Cyprus and Roman Imperial Provinces are on display in the Neues Museum.

The Pergamon altar has Ionic columns with a 120 m. frieze. It is the longest continuous band of relief preserved from the ancient world after the Parthenon Marbles. More than 100 over-life-sized figures are shown in dramatic scenes of combat. The Battle of the gods and giants refers to Pergamon’s war with their enemies, the Galatians. The expression of pain and mental anguish is graphically expressed. The Attalid kings’ home monuments at Pergamon include the propylon (entrance to the temple) Athena, columns from the Temple of Athena 4th century B.C. Over life-sized female statues found near the Pergamon Altar are exhibited.

The young tourist was impressed by the funerary “Stele of a Girl”. The figure shows a girl focused on a box of incense. According to Greek literature, the deaths of unmarried maidens and  were especially mourned by the family. In funerary relief, they are shown as beautiful youths. They represent blossoming life.

The market Gateway from Miletus, a city in Asia Minor, is a fine example of Roman architecture. It gave access to the city’s south market. Emperor Justinian incorporated the market gateway into the city wall in 538 A.D. German excavators from 1903 – 1905 uncovered the main parts of the monument. It was reconstructed in the Pergamon Museum at its original size, with most of the original material. Pergamon, a land of wealth in the lost heartland of Asia Minor, is represented in this unique UNESCO site in Berlin, Germany.

Photo 2- “Absolutely everyone on my Kontiki Tour was heading to the Pergamon Museum,” said Despina Siolas, MD/Ph.D.

Photo 3- The market Gateway from Miletus, a city in Asia Minor, is a fine example of Roman architecture.