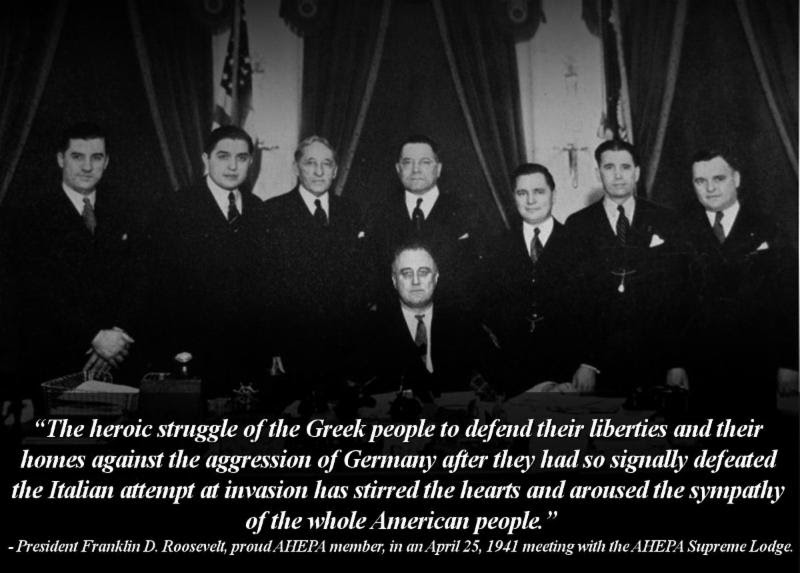 WASHINGTON, DC – Supreme President Andrew C. Zachariades issued the following statement on the 76th anniversary of “Oxi Day” when Greece issued a defiant “No” to fascism as represented by the Axis powers, opting instead to say “Yes” to freedom on October 28, 1940. The Greeks successfully fought the Italian army, pushing the invaders back into Albania after one week. It would prove to be a costly military campaign for the Axis powers.
“On this day, 76 years ago, the citizens of Greece took a courageous stand against tyranny and fascism and fought heroically to defend their autonomy,” Zachariades said.
“President Franklin D. Roosevelt, an AHEPA member, took note of the Greeks’ gutsy defense of their beloved homeland against the Italians, and eventually the Germans, when he told the AHEPA Supreme Lodge in an April 25, 1941 meeting: ‘The heroic struggle of the Greek people to defend their liberties and their homes against the aggression of Germany after they had so signally defeated the Italian attempt at invasion has stirred the hearts and aroused the sympathy of the whole American people.’
“Today, the American Hellenic Educational Progressive Association, of which many of its members fought heroically behind enemy lines in Greece during World War II, commemorates the 76th anniversary of ‘Oxi Day,’ marking it as a day to celebrate freedom, justice, liberty, and the passion of the Hellenic spirit.
“Please take a moment to pause and reflect on this remarkable moment in our Hellenic history.”
Share
Facebook
Twitter
Pinterest
WhatsApp
Linkedin
Email
Viber