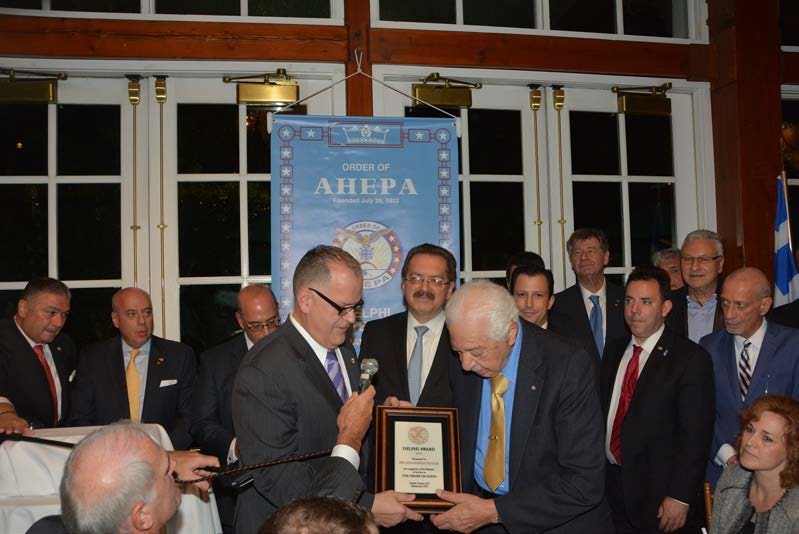 [Manhattan, NY] — The Manhattan Chapter of the Order of AHEPA, Delphi #25, hosted a fabulous dinner Gala event on September 27, 2016 at the center of New York City the famous Central Park Boathouse. Preceding the commencement of the event, an initiation ceremony was conducted behind close corridors and an additional 38 members were initiated into the chapter. The well-attended event (with over 250 guests) was organized to honor the Honorable Judge Nicholas Tsoucalas, a man who has over 50 years of public service and 38 years on the bench and has been a pillar of the Greek- American community and his Greek Orthodox faith. Supplementing his extensive years of community dedication and service, Judge Tsoucalas was honored for his lifetime of service to the Order of AHEPA (a 63 year Life Member!) and his service as a Past President of the Manhattan Chapter.

AHEPA’s Delphi Chapter #25 was founded in 1923 in Manhattan NYC, it was the first Chapter in New York State and one of the first in the Northeast. The Delphi Chapter #25 has had many notable and prominent members in its history, including many phil-Hellenes who embraced AHEPA’s ideals and values. In 1924 Seraphim G. Canoutas joined Delphi Chapter #25 he was at the time the most notable historian and the primary source for the 1880 to 1920 wave of Greek immigrants. Some of the many notable members that followed in Delphi’s rich history were Past Chapter Presidents and later Past Supreme Presidents of AHEPA Dean Alfange and Dr. Kimon Doukas. On March 11, 1931, the then

New York State Governor (and later to become President of the United States) Franklin D. Roosevelt became a member of the Order of AHEPA and joined the Delphi Chapter #25 in New York City. In 1954 then U.S. Senator Irving M. Ives of New York also became an AHEPAN with his membership in Chapter

#25 followed in 1955 by New York State Supreme Court Justice Joseph A. Cox. Other notable past Presidents of Delphi Chapter #25 included the former Chief Council to the NYS Athletic Commission, and former council to NYS Gov. Nelson Rockefeller as well as Past Supreme Council to AHEPA, James Fusscas.* Under the leadership of the current Board of Directors headed by Chapter President, Brother

Argyris S. Argitakos and Chapter Vice President Brother Louis Katsos, the Chapter has undergone a dynamic revitalization and resurgence having initiated over 100 new members in 2016!

Brief Biography of our Brother the Hon. Judge Nicholas Tsoucalas

One of five children of George M. and Maria (Monogenis) Tsoucalas, Nicholas was born on August 24, 1926 in New York City and educated in its public elementary and secondary schools. While attending them, he also worked in the restaurant his father owned and operated for 40 years at Broadway and West 145th Street in Manhattan, Le Petit Paris. Nicholas grew up attending Saint Spyridon Greek Orthodox Church in Washington Heights, NY where he played on the Church’s basketball team from 1941-44 and became the Youth Director 1943-44.

In 1944, Nicholas joined the U.S. Navy and served as a radio operator on APD and transport vessels in the European theater of World War II, as well as the Caribbean and North Atlantic. Upon returning home, he enrolled in Kent State University, Ohio, earning a Bachelor of Science degree in Business Administration in 1949. He subsequently entered New York Law School, receiving his LL.B. in 1951. That same year, Nicholas was recalled into the Navy, serving during the Korean Conflict aboard an aircraft carrier, the USS Wasp.

Following that service, in April 1953, Nicholas was admitted to the New York Bar and began practicing law, specializing in immigration and admiralty matters. He also attended New York University School of Law for graduate courses in Immigration Law and Federal Practice and Procedure. On December 18, 1953 as a young attorney starting out his career in private practice Brother Nicholas Tsoucalas was initiated into Delphi Chapter #25, the same Chapter that his father was a member of. From 1955 to 1959, Nicholas was an Assistant U.S. Attorney for the Southern District of New York. He was also appointed to supervise the 1960 Census for New York’s 17th and 18th Congressional Districts and as Chairman of the Board of Commissioners of Appraisal, Neversink Riparian Rights.

In April 1968, Nicholas was appointed a Judge of the Criminal Court of The City of New York. He was appointed Acting Supreme Court Justice for Kings and Queens Counties between January

1975 and January 1982, after which he resumed service as Judge of the Criminal Court. Among the notable cases that Judge Tsoucalas presided over was the infamous “Son of Sam” case in the late 1970s.

President Reagan nominated Judge Tsoucalas to the Court of International Trade, which nomination was confirmed by the U.S. Senate in June 1986. In addition to his judicial duties with this Court, Judge Tsoucalas has served as a visiting judge in U.S. district courts throughout the country and in the U.S. Court of Appeals for the Second circuit. He became a Senior Judge on September 30, 1996 and, after a 30-year term as a federal judge and a total of 50 years in the legal profession, he officially retired in August of 2015.

Judge Tsoucalas has served with distinction in numerous other positions, including Chairman of the Committee on Juvenile Delinquency for the Federal Bar Association, Chairman of the

Judge Tsoucalas and his wife Catherine (Aravantinos) Tsoucalas were married in 1954 they have two daughters, Stephanie Turriago, a teacher in the New York public schools, and Georgia Argyrople, an attorney who has worked for the American Cancer Society. Judge Tsoucalas also has five grandchildren, Victoria, Nicholas, Catherine, Vivian and Christina.