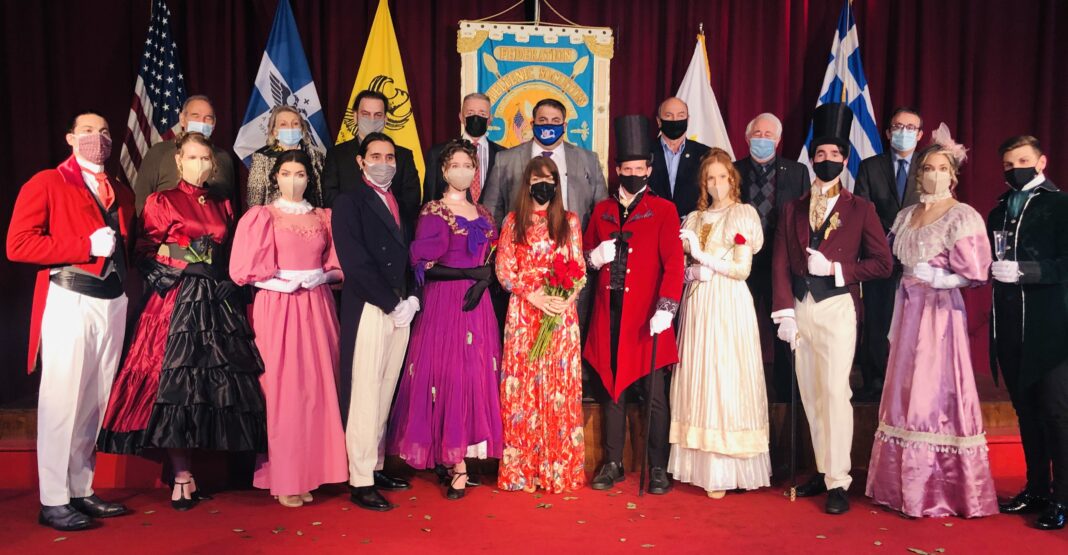 On Saturday, March 13, 2021, the Order of AHEPA presented a unique show for the ages. In Astoria,  at the Federation of Hellenic Societies of Greater New York’s Stathakion Center, AHEPA paid homage to the American support to the Greek War of Independence. Many fundraisers were made during the war to assist the Greek cause. This reenactment was of the Greek Ball of February 27, 1827.

The original event was at the Park Theatre, located in Manhattan and which no longer stands. Thus, AHEPA went to excruciating detail to replicate the Park Theatre of the times and to replicate in detail many aspects of the evening from newspaper accounts. The spectacle when entering Stathakion, was beautiful and imposing.

A large display of the Park Theatre circa 1827 was stationed at the entrance to the Greek Ball reenactment. In fact, the large hall had many displays designed to take you back with historical accuracy. A newspaper display from the US Gazette of 1827 explained: 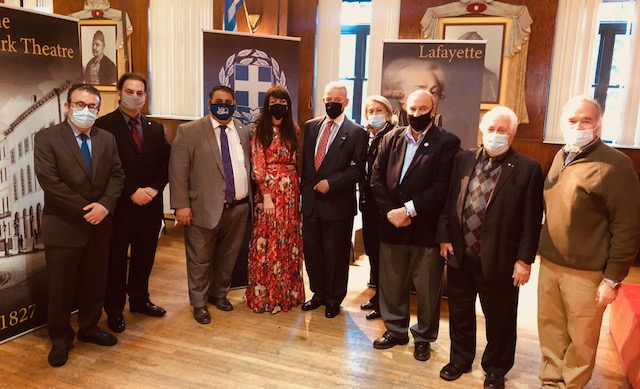 The ball given last night at the Park Theatre, for the doubly patriotic purpose of honoring the birthday of the great father of this country, and for contributing to the fund which our benevolent citizens are accumulating to alleviate the distresses of the suffering Greeks, and, if possible, to accelerate their march to freedom and independence, was all that could have been anticipated or desired. The company began to assemble a few minutes before eight o’clock, and continued to arrive until eleven when the number of ladies and gentlemen was about two thousand. US Gazette

To the left and right of the staged reenactment were two large portraits of General Lafayette and indeed, the Father of America, first United States President George Washington. Historical accounts were that these monumental paintings were as they were in 1827, to the left and the right of the room itself. They were adorned with cornucopias as then – emblems of peace and plenty. Flowers were suspended above the banners representing that the cause of Greece is the cause of all.

The Grecian Cross was on display as well as it was during the evening of the actual event. AHEPA previously reported in the AHEPAN Winter edition kick-off to the year’s events that the Grecian cross was a symbol of the Greek struggle for years in New York. In September 1823, a huge cross appeared in Brooklyn Heights, raised by citizens at their own expense. It carried the wish, “May the Grecian Cross be planted from village to village and from steeple to steeple until it rests on the Dome of St. Sophia.”

As if not enough, the production included professional New York Broadway actors and actresses. They were dressed in authentic evening wear of 1827. From top hats to gowns, manicures to impeccable hairstyles, the cast at first danced and regaled on their own as one would imagine in 1827. Dancing to waltzes and concertos of the day transformed Stathakion into a place it, and the Greek community, has never been.

The highlight of AHEPA’s Greek Bicentennial Reenactment of the Greek Ball was Consul Ms. Lana Zochiou of the Consulate General of Greece. Ms. Zochiou, surrounded by the cast, recited from memory a heartfelt rendition of the famed communication of the first Governor of Greece Ioannis Kapodistrias to then United States President John Quincy Adams. The letter was sent a short time after the original Greek Ball. In it, Kapodistrias thanked the United States with “the sentiments of gratitude with which the liberal conduct of the America nation has filled the nation over which he presides.”  The cast applauded and proceeded tear-eyed to dance with Ms. Zochiou.

Then something remarkable occurred. The cast and the AHEPA members continued, masks on, to mingle together. The mixture of costumes and suits was a stark contrast between the two vastly different time periods. It also underscored the 200-year nature of the alliance between the United States and Greece. 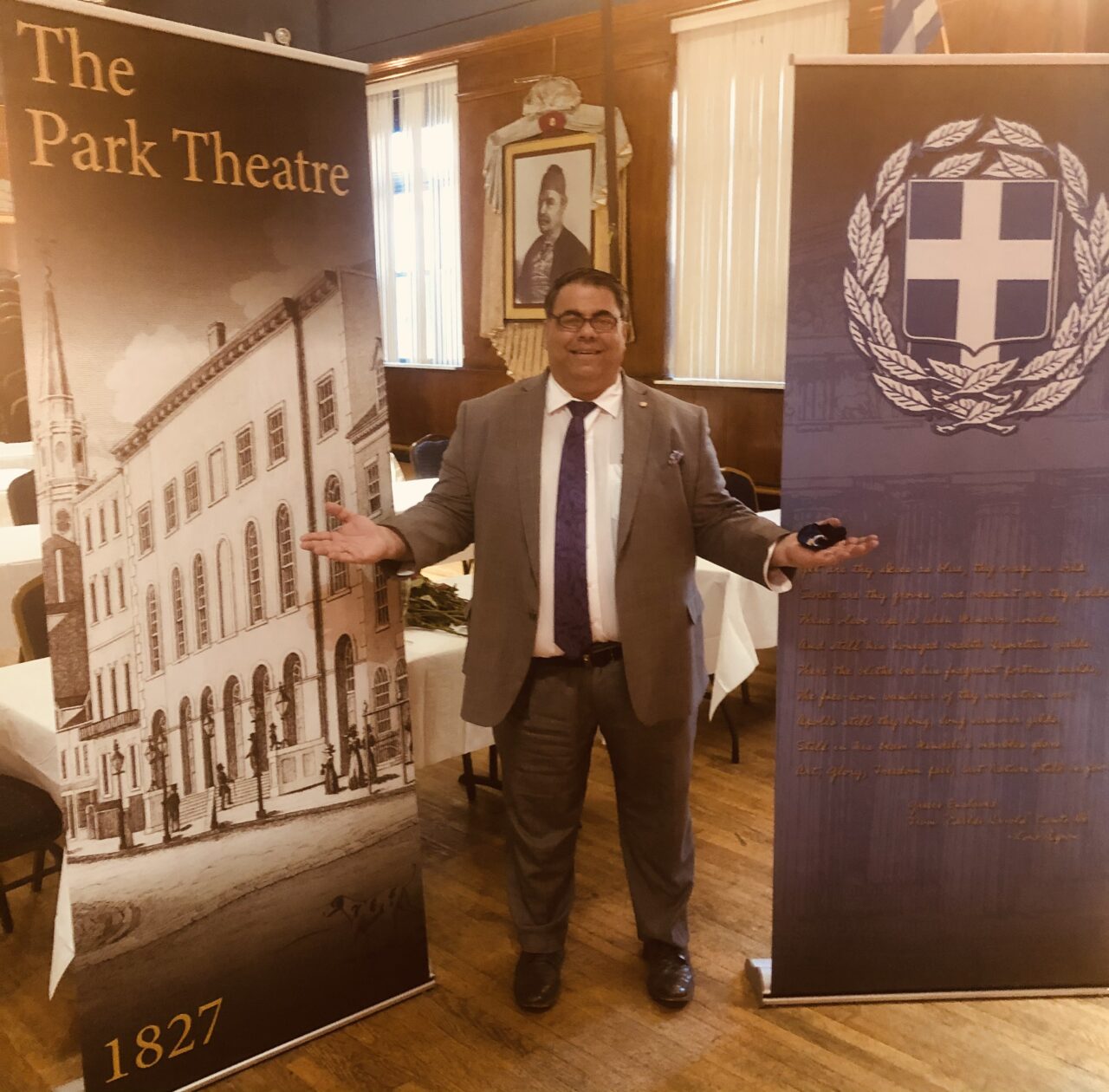 Supreme President George G Horiates explained the significance of each element to the actors and actresses and the attendees from AHEPA  District 6. Ahepans from the Empire Distrct participating in the reenactment were Supreme Governor Tom Dushas, his wife  Eva  Dushas, Hermes chapter members Bill Chryssochos, Peter Argyropoulos, and NY Federation former Presidents Jimmy Kalamaras and Elias Tsekerithis. The President of the Federation of Hellenic Societies of Greater New York Cleanthis Maimoroglou was a gracious host, and a participant as well.

AHEPA thanks the actors and actresses of the cast of Greek Bicentennial Reenactment of The Greek Ball, Consulate  General of Greece  Lana  Zochiou, Vasilis Keisoglou of Cosmos Philly, Shana Lang of Washington Talent Agency, Orth Graphics, Philip Christopher of PSEKA and the Federation of Hellenic Societies of Greater New York. Take a bow everyone, that’s showbiz!