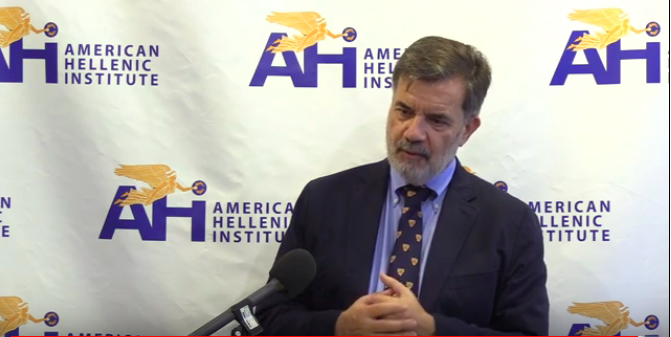 “Sadly, the tragic events of August and September 1922, where countless Greeks of Asia Minors were murdered, occurred during the era of the Armenian genocide and the broader genocidal campaign against Greeks, Pontians, Assyrians, and other Christian communities,” AHI President Nick Larigakis said during introductory remarks. “The once robust city of Smyrna, which at the time was a thriving center of Greek culture, was obliterated. The catastrophic events of 1922 are important to commemorate because they remind us of man’s continuing inhumanity to man.”

AHI Board Member James Marketos, Esq., introduced Professor Kitroeff.  The professor provided a multi-faceted perspective of the Smyrna Catastrophe during his presentation. He positioned the Smyrna Catastrophe as a crucial historical junction point and as an incident undergirded by multiple systemic factors. Furthermore, Professor Kitroeff effectively debunked conspiracies by a certain segment of the Turkish intelligentsia who believe that Greek troops set Smyrna on fire.  To illustrate his point, the professor provided a specific timeline delineating when Greek troops left the city of Smyrna and when Turkish troops entered to show the deliberate and genocidal nature of the massacre of innocent, non-combatant Greeks in the city. He further buttressed this point by explaining how the Jewish and Muslim quarters of the city were left nearly untouched. Furthermore, Professor Kitroeff juxtaposed the historical importance of this tragedy with its understated presence in the modern-day public conscience. Professor Kitroeff, who is concerned about crucial events such as Smyrna being relegated to parenthetical status in the 21st century, discussed the need to promote Greek history not only to the general population, but to the Greek American community as well.