Al-monitor reports on 'Pope's visit to Turkey is a chance to bridge...
Featured 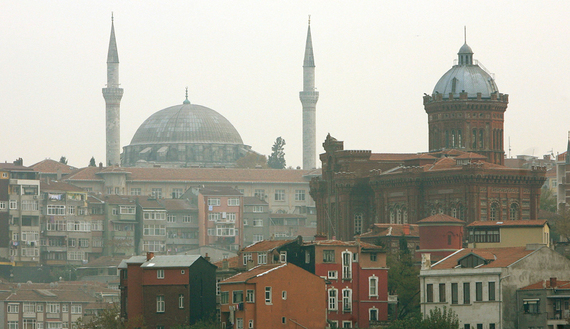 Al-Monitor is a new media website providing original reporting and analysis by prominent journalists and experts from the Middle East and offering in-depth analysis through its Iran,  Iraq, Israel, Lebanon, Palestine and Turkey “Pulses.”

As Ankara prepares to receive Pope Francis on Nov. 28-30, Turkish media have noted with raised eyebrows that Turkish affairs do not appear to be uppermost on the pope’s mind. “It was conspicuous that the pope chose to speak of the ‘Ecumenical Patriarchate’ and ‘Constantinople’ rather than of Turkey,” when referring to the destination of his upcoming visit, the daily Milliyet pointed out huffily. It is a Turkish delusion of grandeur to believe that the spiritual leader of over a billion Catholics around the world should see, one and a half years into his papacy and before visiting most of those countries that have predominantly Catholic populations, a pressing need for talks in Ankara. His visit to the Turkish capital is little more than an obligatory courtesy call on the host country of his real destination, the Ecumenical Patriarchate of Constantinople.

The patriarchate has long been at the heart of a deep misunderstanding between Turkey and the West. While the Fener, as the patriarchate is locally known for its location on the Golden Horn, appears to many Turks as little more than a local bishopric for the handful of remaining Greeks in Istanbul, it retains enormous significance for 300 million Orthodox Christians around the world. In addition, its importance to Christianity has been growing again over the past 50 years, as successive patriarchs and popes since 1964 have been seeking a path to reunification of the world’s two largest churches, which split apart nearly a thousand years ago. Those efforts have recently intensified under the auspices of the present Patriarch Bartholomew and his counterparts in the Vatican, John Paul II, Benedict and now Francis.

From the patriarchate on the Golden Horn, Bartholomew has been steadily advancing the rapprochement, in which his part is the more difficult one: In contrast to the Roman Catholic Church with its sleek hierarchy, the Orthodox Church is an unruly affair composed of over a dozen self-governing churches, which must be made to agree on common ground for negotiations with the Latin Church before these can proceed. As first among equals, among the leaders of the Orthodox churches, it falls to the Ecumenical Patriarch to organize this alignment. After several preparatory meetings, Bartholomew has now called the first ever pan-Orthodox synod for 2016 in the Hagia Irene Church in Istanbul, where it is to adopt a framework for reunification talks with Rome. As a next step, he has raised the idea of an Ecumenical Council of all churches, East and West, to meet in 2025 in Nicaea — modern Iznik on the Sea of Marmara — where the first such Ecumenical Council was held in 325.

It is not only Ankara that tends to overlook this heritage and the continuing role of the Ecumenical Patriarchate in the world of Christianity. In Europe, opponents of a Turkish accession to the European Union are fond of pointing to the Christian roots of European culture and values, arguing that Turkey lacks the cultural credentials to join the club. Ironically, this argument is mainly advanced by Christian democrats. The pope’s visit could serve as an opportunity to remind Europe that these roots are nowhere deeper than in Istanbul and Anatolia. Not only the first council, but all seven Ecumenical Councils recognized by both the Catholic and the Orthodox churches were held on what is Turkish soil today — in Constantinople, Ephesus, Nicaea and Chalcedon, which is today the Istanbul district of Kadikoy. It was at these councils that the theological foundations of the Christian faith were laid, right down to the Nicene Creed that is still professed by Christians all over the world today: “We believe in one God, the father Almighty, Maker of heaven and earth …”

Nor is this rich Christian heritage a mere museum relic in modern Turkey. In the Ecumenical Patriarchate, it is alive and pulsing and continuing to make world history. Many Christians hope that the great schism of Christianity may be overcome by its millennium in 2054, the patriarchate’s spokesman Pater Dositheos said this week. After a thousand years of unity and another thousand years of discord, Christians would then embark on a new millennium together. Clearly, the daily concerns of a 90-year-old nation pale beside these matters that are to be discussed between the pope and the patriarch on Francis’ visit to the Fener. Instead of sulking about the perceived slight, Turkey should take pride in being the home of this 1,700-year-old institution, showcase its role as venue for the planned synod and council, and support the patriarchate’s efforts for religious peace — starting by allowing its seminary Halki to reopen.