Album for the fight of the Greek defenders of Rupel 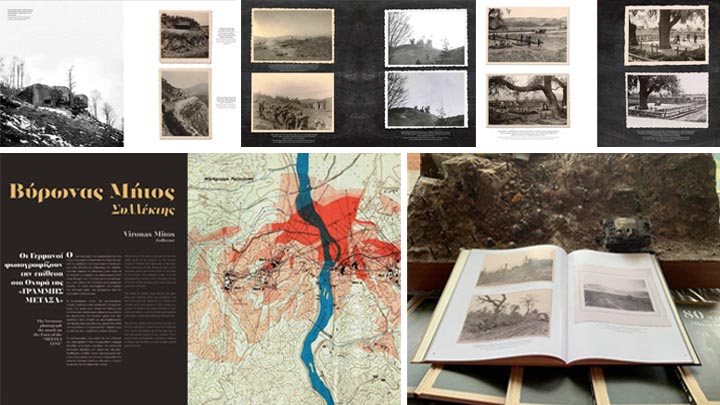 The ancients used to say “a picture is worth a thousand words”. This is the case with the photo album dedicated to the 80th anniversary of the “Battle of the Fortress” recently released by the Social Cooperative Enterprise “Agistros Drasi“.

Exactly 80 years after that second “No” of the Greeks, Koin.S.Ep. based in Serres, in the context of actions aimed at preserving the historical memory, proceeded to the publication of a collectible anniversary album entitled: “1941-2021: 80 years since the Battle of the Fortress”, which includes unique photos, witnesses of the German attack on battle of the forts, in April 1941 and the struggle of the Greek defenders. Characteristic was the admission of Adolf Hitler, in a speech at the Reichstag in May 1941, that “the Greek soldier fought with the utmost heroism and self-sacrifice.”

“In the vortex of World War II”, stresses speaking to APE – MPE the president of Koin.S.Ep. “AGRISTRO ACTION” Anthimos Georgiadis, photos and other souvenirs from the attack on the Greek “Line Mazino”, as the Germans called the fortifications on the Greek-Bulgarian border, had a prominent place in their personal military albums. “These photos were shown with pride, because of the reputation that the companies gained against the forts, due to the toughness of the fight, the brave resistance of the Greek defenders, but also the admiration for their construction and endurance”.

The photographs presented in the completely edited album, almost in their entirety, come from the personal archive of the Thessaloniki collector Vyronas Mitos, who with special love and zeal collected rare material of the previous decades, which is today the only document about the German attack in Greece. , but also the years of occupation that followed until liberation in 1944.

“The photographic material of the publication”, emphasizes Mr. Anthimos Georgiadis, “captures the events not only during the period of hostilities (6-10 / 4/1941), but also what preceded the attack but also followed after the capitulation and the surrender of those bands that had not been occupied by the Germans.

In the prologue of the album, the Minister of Transport and Infrastructure, Costas Karamanlis, emphasizes, among other things: “The Battle of the Fortress in April 1941 may have lasted less than four days, but it contributed in its own way to the outcome of World War II. As a native of Serrai, I feel special honor and pride for what took place 80 years ago in the fortress of Belles and Agistros, but also in Omorfoplagia with the sacrifice of the hero Sergeant Dimitrios Itsios. It is the duty of all of us not to allow the historical memory to fade, the heroic struggle of those who fought and the sacrifice of those who lost the northern borders of their homeland, defending modern Thermopylae “.

The text of the album was edited by the historian George Polychrou and the journalist Panagiotis Savvidis, while the responsibility for the documentation of the photos was taken over by the teacher and researcher, Platonas Peraris. More information can be found on the interactive website www.roupel.gr created by Social Cooperative Enterprise “Agistros Drasi“.