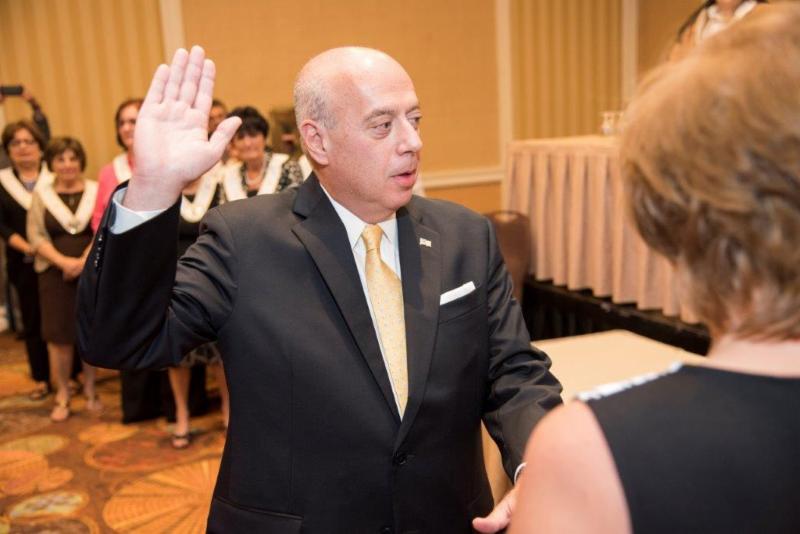 Zachariades takes the Oath of Office.
WASHINGTON (August 1, 2016) — The delegates of the American Hellenic Educational Progressive Association (AHEPA), the leading association for the nation’s millions of American citizens of Greek heritage and Philhellenes, elected Andrew C. Zachariades, Brick, N.J. as their supreme president at the 94th Annual Supreme Convention, Las Vegas, Nev.  Zachariades ran unopposed in elections that were held July 28, 2016.  Formal installation ceremonies were held July 29, 2016.
“It is an honor and privilege to be elected supreme president,” Zachariades said. “I’m sincerely grateful to the convention delegates who placed their support and trust in me to lead this vibrant, venerable, and unique organization.”
He added, “This is a critical year on many fronts. Elections in the United States will provide us with an opportunity to work with a new administration and Congress in 2017. Greece continues to deal with a gripping economic crisis amid an unprecedented migratory crisis; and in Cyprus, challenging issues such as property, territory and security need to be addressed as settlement talks proceed. In addition, the need for community service around the world is ceaseless and the promotion of Hellenic ideals and our Hellenic heritage will always be priorities for AHEPA.
“I am excited to work with our seasoned Supreme Lodge and our membership to address these challenges and keep AHEPA on the steady path set forth by my predecessors in a spirit true to our mission.”
About Supreme President Zachariades
Zachariades is a 25-member of Hudson Chapter 108, Jersey City, N.J.  He has served AHEPA in numerous leadership positions including most recently supreme vice president.  As supreme president, Zachariades’ responsibilities include being the chief executive officer, and principal spokesperson, of the entire AHEPA domain, which includes the United States, Canada, and chapters in Europe.
Moreover, the supreme president has dedicated himself to the Fifth District AHEPA Cancer Research Foundation, which has raised nearly $1.5 million for cancer research. During his eight-year chairmanship of the foundation, grants were provided to several industry leading organizations such as: Rutgers Cancer Institute of N.J., Weill Medical College Cornell University, and Fox Chase Cancer Center. In 2008, Zachariades was awarded the District Five Ahepan of the Year.
Zachariades is an executive-level financial accountant for most of his career where he has overseen complex transactions and billions of dollars of real estate development. For the past 15 years, he has served as the CFO and Controller of FBE Limited LLC, a privately held investment firm located on Wall Street in New York City. He is a graduate of Rutgers University where he was conferred a degree in Managerial Accounting. In addition, he earned an advanced degree in Financial Accounting from the New York Institute of Finance. Zachariades has distinguished himself in his field and is an esteemed member of the Hellenic American Bankers Association. Always looking to give back, Andrew is a frequent lecturer at the Graduate School of Business at William Paterson University, which is part of the New Jersey State University system.
Zachariades and his wife, Antoinette, are members of Evangelismos Greek Orthodox Church, Jersey City, N.J., and have three children.  Andrew also currently serves as vice president of the Cyprus Children’s Fund, which was founded in 1974 to support the educational pursuits of eager, hard-working and dedicated students after the Turkish invasion of Cyprus. To honor his many accomplishments, the Greek Orthodox Archdiocese awarded Zachariades with the Medal of the Order of Saint Paul in 2000.
Election of AHEPA Leadership for 2016-2017
The AHEPA Supreme Lodge is the international governing body of the organization.
The 2016-17 Supreme Lodge is comprised of: Canadian President Bill Bakalis, Kitchener, Ontario; Supreme Vice President George E. Loucas, Esq., Cleveland, Ohio; Supreme Secretary Carl R. Hollister, Mason, Ohio; Supreme Treasurer James Kokotas, Brooklyn, N.Y.; Supreme Counselor George G. Horiates, Esq., Moorestown, N.J.; Supreme Athletic Director Louis G. Atsaves, Lake Forest, Ill.; and Sons of Pericles National Advisor Sandy Papadopoulos, Atlanta, Ga.
The eight Supreme Governors are:  Region I: Gus Paras; Region II: Anthony Drakos; Region III: Chris Diamantoukis; Region IV: Jack Isaac; Region V: George L. Kalantzis; Region VI: Donald Vanover: Timothy Joannides; Region VIII: George Booras; and Region X: Nicholas C. Papadopoulos.
Elected to positions on the Board of Trustees were: Cos Marandos, who was re-elected, and Elias Tskerides.  Craig Clawson was re-elected to the Board of Auditors.
AHEPA Family Elections
The organizations that comprise the AHEPA Family also held elections.  Jan Spanos, Sacramento, Calif., was elected Daughters of Penelope Grand President; Nikolas Apostolou, Wyckoff, N.J., was elected Sons of Pericles Supreme President; and Tria Charnas, North Royalton, Ohio, was elected Maids of Athena Grand President.
Friday’s Installation Ceremony of newly-elected officers officially concluded the 94th AHEPA Supreme Convention, which began Monday, July 25.
The 2017 Supreme Convention will convene July 24 to 30 at Walt Disney World Resort, Orlando, Fla.
Share
Facebook
Twitter
Pinterest
WhatsApp
Linkedin
Email
Viber

Previous articleOrthodox Community Action Teams Assist in Flood-Ravaged Louisiana
Next article“Those Who Became One with the Earth”: An Interview with Georgia Skopouli Lili Bita Cultural Correspondent