The Olympic Games were held by the Athenian Academy of Clearwater, in Florida.  The school program took place at the PE court and in the outdoor area of the Academy. Several distinguished guests attended the event including the Consul General of Greece in Tampa, Dimitrios Sparos, the Founder of the Athenian Academy, George Poumakis, the CEO of the Athenian Academy, Alex Veloudos, the School Board member, Vasili Nezer, the President of the Federation of Hellenic American Educators, Stella Kokolis, the President, Michael Alexandrou, along with the Board of Directors of the Panhellenic Federation of Florida, the former President of the Panhellenic Federation of Florida, Ioannis Kokolakis, and the President of the Athenian Association of Attiki, Eleni Kariofili.  After the National Anthems of Greece and United States had been sung, the school event started with opening remarks, acknowledgments as well as awards and recognition of the following persons: Leslie Cruz, Michael Alexandrou, Stella Kokolis and George Poumakis. 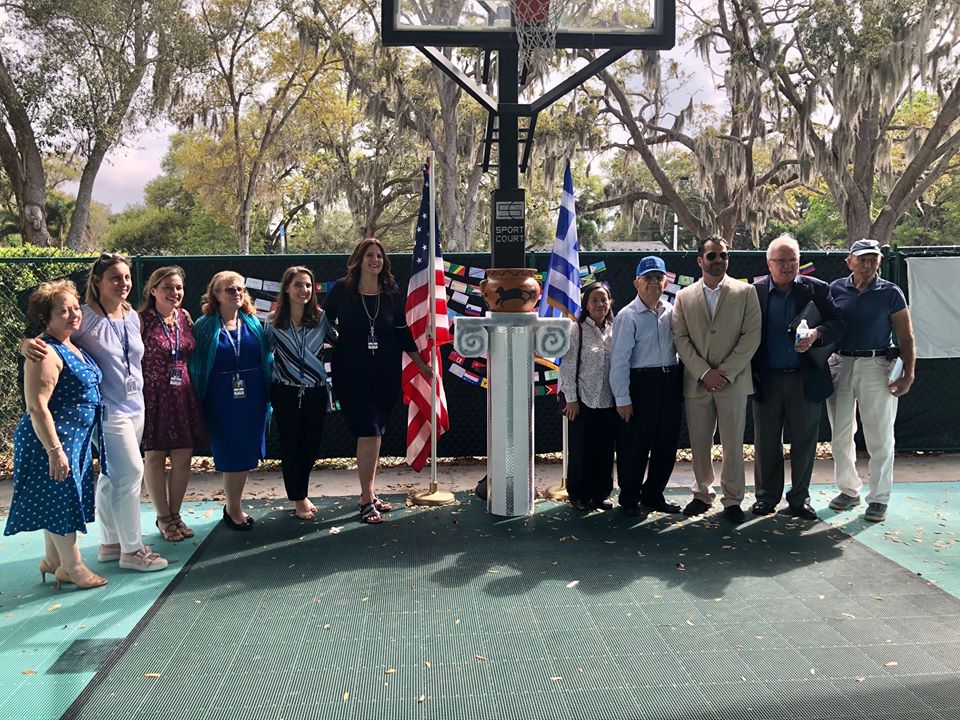 Sevasti Ziogas – Varitimidis, Statement of the Executive Director of Greek Education and Coordinator of the Olympics

Within the framework of Olympic Education, we have sought to promote the Olympic Games from ancient times to the present day, in Athenian Academy, the first Greek Immersion charter school in the US. We managed by hard work to highlight Ancient Greece through a symbolic ritual and also offer an international experience with the “Parade of Nations”. At the same time, we have been celebrating 20 years of excellence and contribution to the Greek language and Greek culture since 2000.  In 2007, when the great fires broke out in Greece, Mr. George Poumakis, the founder of the school, organized a fundraiser through the Athenian Academy, to provide financial assistance to Ancient Olympia that suffered many damages. We are proud of our administrators, office staff, teachers, students, parents, and the community that has supported us over the years. Finally, we thank the Hellenic Ministry of Education and Religious Affairs, the Consulate General and the Omogenia of Tampa for their continued support.

Athenian Academy Charter School was the first Greek Immersion Charter School in the United States founded in the year 2000.  We are a K-8 public charter school rich in tradition and family values.  Students learn Greek and Spanish daily beginning in Kindergarten, and our middle school students have the opportunity to earn multiple high school credits in both foreign languages.  Athenian Academy students not only learn the Greek language daily, but they are immersed in Greek culture and history.

Our Olympic Game tradition is held every four years.  Our 2020 Olympic Game Ceremony was a special year as we celebrate 20 years of excellence.  Our ceremony concludes with an impressive Parade of Nations where 28 classrooms from preschool to 8th grade represent countries around world and 485 students and 40 faculty members parade through the campus to mark the opening of the games.  The event is followed the next day by our field day events organized by our PE teachers. Students are fortunate to experience the Greek history behind the games and look forward to this Athenian Academy tradition.