CommunityAVANT PREMIERE of the film «KAZANTZAKIS» in New York
CommunityGreeceCulture

AVANT PREMIERE of the film «KAZANTZAKIS» in New York

AVANT PREMIERE of the film 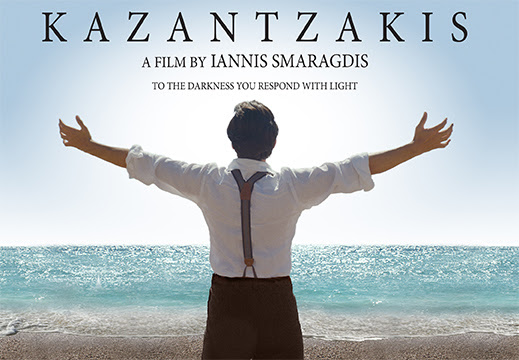 A journey of discovery. A work of Positive Energy, Love, Faith and Optimism.

The much-anticipated film KAZANTZAKIS by Iannis Smaragdis begins its international “journey” from the beautiful city of New York. The Avant Premiere took place at the NYIT – NEW YORK INSTITUTE OF TECHNOLOGY on the 10th of December 2017 and is dedicated to Nikos and Carol Mouyiaris, in loving memory of their son Alexis Mouyiaris.

The director Iannis Smaragdis and his wife and producer Eleni Smaragdi, welcomed the guests and gave an introductory speech at the opening of the event. The film’s protagonist Marina Kalogirou also attended the Avant Premiere.

The film’s first Avant Premiere took place in Greece and more specifically in Crete on the 15th of November, followed by the official premiere in Athens on the 20th of November at Pallas Theater.

The year 2017 was announced by the Greek Ministry of Culture as “Nikos Kazantzakis Year”, signaling the 60 years of the death of the great author and intellectual.

With this film, world renowned, award-winning Greek director Iannis Smaragdis aims to elevate the inspiring personality of writer Nikos Kazantzakis, as well as magnify Greece’s magical scenery, where the writer’s spirit developed. Through this film the director wishes to convey the Cretan author’s ecumenical dimension, in the hope that it will make all the Greeks proud, in Greece and abroad.

Brilliantly portraying the main character of Nikos Kazantzakis is actor Odysseas Papaspiliopoulos, while the wonderful Marina Kalogirou portrays his partner, Eleni. Eight-year-old Alexandros Kambaxis is young Nikos Kazantzakis and Stefanos Lineos is the writer at a mature age.

A slew of renowned actors participate in the film. Argiris Ksafis portrays Kazantzakis’ father and Maria Skoula his mother. Actor Nikos Kardonis skillfully recreates the flamboyant poet Angelos Sikelianos and Amalia Arseni is his wife Eva, Itka is played by Youlika Skafida, Alexandros Kollatos is Jules Dassin, Zeta Douka is Melina Merkouri, Adrian Frieling is Dr Heilmayer, while Anthoula Katsimatides is “the good witch”. In a surprise appearance as Dr. Stekel is Nikos Marinakos. Other remarkable actors that took part in the film are Olga Damani, Ersi Malikenzou, Panos Skouroliakos, Takis Papamatthaiou, Michael Androulidakis in the role of El Greco, Loudovikos of Anogeia, Thodoris Atheridis is exceptional as Zorbas and of course, in the role of the abbot of Mount Sinai we see an “otherworldy” Stathis Psaltis.

SPECIAL THANKS TO THOSE WHO MADE THIS SCREENING POSSIBLE :  NICOS & CAROL MOUYIARIS –

Special Thanks to Mr. Jimmy Demetro, President of the Greek Film Festival in New York.

The 19th Annual Capital Link Invest in Greece Forum that takes place in New York the next day, Monday the 11th of December, has invited all its Forum speakers to attend the avant-premiere of the film KAZANTZAKIS οn its international voyage, starting from New York.