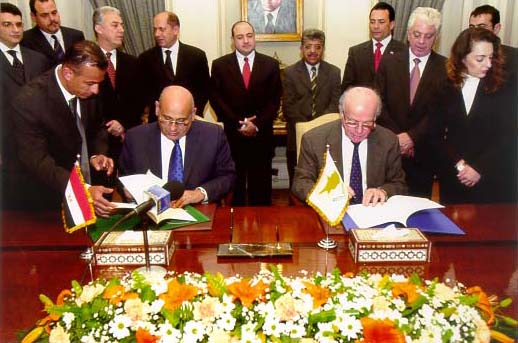 Caption: The signature of the historic Agreement of the 17th February 2003 in Cairo for the EEZ of Cyprus-Egypt. Signatories are Ahmed Maher, Minister of Foreign Affairs of Egypt and Nicos A. Rolandis Minister of Commerce, Industry and Tourism, Cyprus. Will this Agreement eventually be a blessing or a curse?

In my long career I have been taught that, in difficult moments, those who are small and weak remain and suffer alone, unless some major interests are involved. Irrespective of laws, principles and justice nobody will give a hug to the weak. A hug which will save him, not simply offer consolation.

Greek Cypriots should have been well conversant with this moral. It is part of our life, of our recent history. However it appears that teachings have not reached us. We have close to us a strong and ruthless neighbour, Turkey, which is very important both for the West and for the East. But we never assessed correctly the looming dangers.

Nicos is charismatic and very able. I have put forward my stand and have made my suggestions. I wish him wisdom and good luck. He needs both.