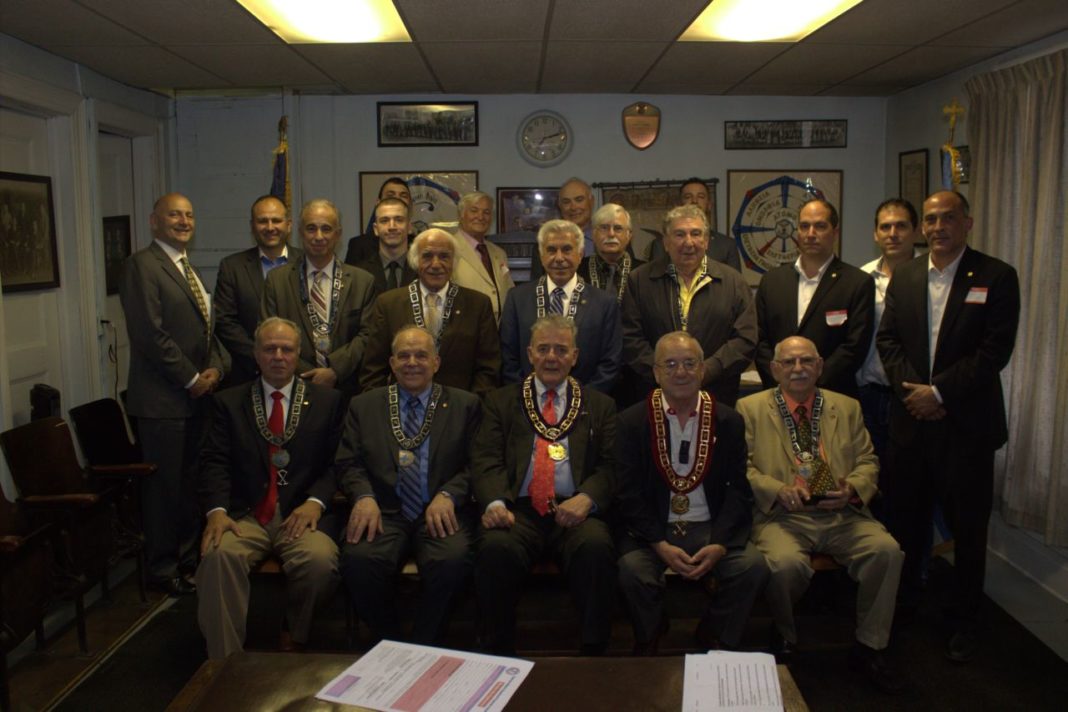 [Binghamton, NY] — Another tower of Hellenism was reactivated on Sunday, May 27, 2018 at Holy Trinity Greek Orthodox Church, located at 214 Court Street in Binghamton, New York. The Order of AHEPA, the largest Greek American organization in the world, re-activated Binghamton Chapter #77, dormant for many years, but originally established on July 12, 1925 and renamed “Leonidas” Chapter no. 77.

The reactivation included 8 new “Leonidas” AHEPANS, plus two new AHEPANS from Hudson Odysseus Chapter 545. The initiation ceremony was performed in the Chapters landmark lodge room which was built in the 1930’s, that includes years of mementoes and historical Hellenistic achievements.

A large delegation of AHEPA leaders, from neighboring chapters in Rochester and Middletown, New York participated in the beautiful ceremony. The chief installing/initiation officer was AHEPAS Regional Supreme Governor, Tom Dushas from Rye, New York. He was assisted by Chris Pavlidis, President of Hudson Odysseus Chapter 545 and by Past Supreme Treasurer Mike Papapanu and Dennis Kiriazides, both Senior AHEPA Leaders in Rochester, New York and both very involved in AHEPAS Statewide Housing Foundation.

The reactivation of the “Leonidas” Chapter is in addition to the new AHEPA chapter in Middletown and the reactivated chapter in Schenectady all within the last year. In addition, the three local chapters, join chapters in Albany, Troy, Syracuse and Rochester, giving upstate a substantial Hellenistic presence in their communities. They join the 20 other downstate Chapters, including the recently reactivated Port Jefferson Chapter, forming the largest statewide presence of any state in the United States. The states membership is expected to close the year at approximately 1,650 members. The Empire State, District 6, is expected to continue the growth, expansion and reactivation of their District, with additional chapters well into the remainder of this year and into 2019. The goal of AHEPA New York leaders is to reach 2,000 members by AHEPAS 100th Anniversary celebration in Atlanta in 2022.

The states district convention is in Hempstead, New York, the weekend of June 15th and its National Convention will be held in Atlantic City, NJ the week of July 23. Both conventions are expected to draw large delegations from New York. Congratulations “Leonidas” AHEPA for rejoining the AHEPA Family.

It should be noted, AHEPA District 6, the Empire State, has performed brilliantly over the last five years. Their membership, their signature events and all around fraternal performance, both upstate and downstate have lifted AHEPA to the number one district in the nation. A model of exceptional performance due to outstanding leadership at the Chapter, District and Supreme Lodge levels. Well done Brothers.

Shown below are AHEPA Officers and members of the reactivated “Leonidas” Chapter.