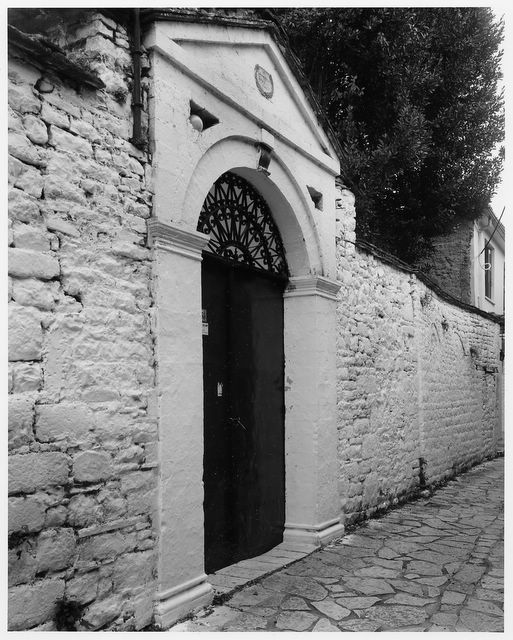 It was a chance encounter on the streets of New York that led photographer Vincent Giordano to a 2,000 year-old Jewish community that calls Greece its home.

“Giordano was not Jewish, not Greek, but very much a New Yorker,” said Dr. Samuel Gruber, president of the International Survey of Jewish Monuments.

Giordano was wandering down Broome Street in 1999, on the lower East Side, and came across this little synagogue, the Kehila Kedosha Janina.

He was invited in. When he went through the door, another world opened up visually and culturally.

“It was a lower East Side tenement synagogue, a small confined space but packed full with objects, ritual objects with inscriptions and wall hangings and textiles with Hebrew lettering and with flickering lights and a bunch of guys who were warm and inviting,” Gruber said.

Giordano had found the Romaniote Jews. This small New York community had ties to a restored synagogue in Ioannina, Greece that traced its roots back 2,000 years when the Jews were Greek-speaking citizens of the ancient Roman Empire.

Giordano, fascinated, took photos and videos and recorded interviews with some of its people.  In 2006, he visited the Kal Kedosh Yashan Synagogue in Ioannina, continuing to record the history and culture of the Romaniotes.

“As I explored and probed deeper, I discovered this story is much larger than the synagogue on Broome Street, that it reaches far into the past…to the rich history of the Jews in ancient Greece and the Byzantine Empire…and the devastation of the Holocaust,” Giordano was quoted as saying.

Eager to share this unknown treasure, Giordnano reached out to Gruber and the International Jewish Community of Monuments, partnering to sponsor a documentary and to offer advice on what should be included as part of the historical record.

For Giordano, it became an ongoing and unfolding story over 10 years.

Vincent Giordano became ill and passed away in 2010 before he had a chance to complete his documentary.  Now others are continuing the work he began, raising funds to produce “Before the Flame Goes Out/Irtaman,” a documentary on the Romaniote community.

“This is a story that we feel needs to be told for so many reasons, particularly because this was a project that Vincent was not able to finish, and because it’s a Greek story, it’s a Jewish story. It’s a story about keeping tradition. It’s a story about survival and we’re pledged to bring it to the world,” said Renee Pappas, executive producer for the documentary.

The producers are sitting on a huge archive of photographs, videos and interviews with individuals in Greece and New York.  The documentary will supplement that material with historical information from scholars. Vincent Giordano’s widow, Hilda Giordano, is associate producer for the film.  The documentary will show the unique mingling of Greek and Hebrew language, culture, music, dress, even food of the Romaniote community.

Much of their liturgy is done in Greek, with inscriptions in Greek and Hebrew.  The music sounds closer to what might be heard on a bouzouki, the dance a mix of Hebrew and Greek. At dinners, the Romaniote drinking preference might be Ouzo, dishes recognizably Greek.

“In Ioannina, It’s more the feel of the place, the people and the sounds, the language, the music which tell you that you are in a place that’s different from the kind of synagogue my ancestors grew up in in Eastern Europe,” Gruber said.

There was a lot of overlap between the Greek and Jewish cultures because of the Romaniote’s long ties to the land and use of the Judeo Greek language.

“They were integrated economically, politically. Jews took part in various wars of Greek independence,” Gruber said. Language and a common history gave the Jews a feeling that they were as Greek as any Greek, that they belonged to the land as much as anyone belonged to the land. “They often think of Greece as their homeland. It’s just a very special and wonderful experience. They have this spirit.”

Most of the Jews at Ioannina were killed in the Holocaust, sent to Auschwitz. What has allowed the Romaniote traditions to survive were the ties between the New York community, made up of Jewish immigrants who came to the United States in the 1900s and the few post-Holocaust survivors in Greece.

“They all had relatives back in Greece and they were able to send aid and assistance to Greece after the Holocaust and ever since there’s been a strong tie between the small surviving Ioannina community (maybe 30 people) and the larger Ioannina community of immigrants in the United States,” Gruber said.

It seemed certain in 1999 that Romaniote traditions were doomed to disappear with so few Jews left in Ioannina and the New York synagogue close to closing.  Now there has been a resurgence of interest to preserve the community’s traditions and memories. Work on the documentary is partly responsible, as was a decision to create a museum at the New York synagogue.

“What’s interesting to me is that most Jewish people I talk with do not know anything about the Romaniote community and I think it’s an important story for Jewish people throughout the world to know about, and it’s a Greek story,” Pappas said.

The producers of “Before the Flame Goes Out” are actively seeking sponsors for the film and for a planned digital archive. To support this project, or for more information, contact Renee Pappas, Executive Producer at [email protected], or Dr. Samuel Gruber, Producer, at [email protected]. You can also find out more by visiting http://www.romaniotelegacy.org/ or www.isjm.org and clicking on ISJM projects.