Brother Dr. Michael Billys of AHEPA Chapter #64 was awarded AHEPAN OF THE YEAR, the District’s highest honor, at the Pennsylvania State AHEPA District 4 Convention held virtually for the first time in Pennsylvania. Past District Governor Charles Mackenzie stated this award given to Dr. Billys was “In Recognition of Outstanding Leadership, and Devoted Services, As Well As His Unselfish Contributions, Toward the Advancement of the Programs and Progress of the Order of AHEPA.”

Dr. Billys, has served his community as a motivational speaker, public school special education professional teacher/facilitator and family/individual psychotherapist. He is a graduate of both Hellenic College and the Holy Cross Theological School. From his early years growing up in Reading, PA, Dr. Billys has been directly involved in the Greek Orthodox community. Serving as an altar boy he also joined both GOYA & the Sons of Pericles in his youth. From high school he then matriculated immediately to the Greek Orthodox Seminary. After serving as Youth Director for the Chicago Diocese of the Archdiocese for 5 years, Dr. Billys moved back to PA where he taught Emotional and Learning Support in the Harrisburg School District for 28 years. Dr. Billys then became a family & individual mobile therapist working for the Youth Advocate Programs, Inc. of Pennsylvania serving the many diagnosed at-risk children including many of the autistic spectrum of diagnosis. Dr. Billys is recently retired having served in this capacity for 15 years.

Dr. Billys has been an AHEPAN for over 40 years and has been re-elected Pennsylvania District Marshal for the 3rd consecutive time. Dr. Billys is widely known for his almost daily emails that go to his Chapter #64 brethren, as well as District #4 Lodge members and various Supreme Lodge members. Dr. Billys spearheaded two Mass Initiations at his Chapter #64 the last two years where past Supreme President George Loucas and current Supreme President George Horiates both attended and initiated a total of 30 new members to the AHEPA Chapter #64. This accomplishment was an instrumental achievement that has inspired the many philanthropic and charitable contributions by Chapter #64 both national and local in the Harrisburg community led by Dr. Billys.

Under Dr. Billys guidance as both Membership and Sick Committees Chairman the fellowship was served with precision and total care. The membership list increased exponentially by increasing from 40 members to 105 over the last 4 years. Dr. Billys organized and was directly responsible for the many programs of Chapter #64 which included Dinner-Meetings, ‘Mass Initiation’ Ceremony-Banquets, Commemorations at the PA State Capital for Greek Independence Day, AHEPA DAY/MEMORIAL DAY Commemorations, OPA CARDS Fundraisers, and he was integral member of the Scholarship presentations. Dr. Billys is well-known for his communications and numerous emails that are sent to his chapter membership as well as both District & National leadership.

Dr. Billys also spearheaded the SERVICE DOGS FOR WARRIORS project this past year when $15,000 was collected to sponsor a dog in honor of Chapter #64’s beloved brother John Sempeles who was an integral leader in Chapter #64. The ‘crown jewel’ of District #4 was this particular project that succeeded to collect $15,000 to complete the cost for the service dog. Chapter #64 collected $6,000 for this cause under Dr. Billys promotions collected the most funds for the National Service-Dogs Foundation of AHEPA.When asked what his greatest achievement for AHEPA has been in his career, Dr. Billys referred back to 1979 when he participated in a cross-country trek on bicycles educating the Greek communities along the way about THALASSEMIA (Cooley’s Anemia) with a group of 6 Greek-Americans. This project was directly sponsored by the National Cooley’s Anemia Foundation of AHEPA and the Philoptochos Society of the Greek Orthodox Archdiocese of America. Dr. Billys was awarded a Certificate of Achievement at the Supreme Convention in San Francisco and has been motivated to help the underprivileged and disadvantaged throughout his illustrious career of genuine service. 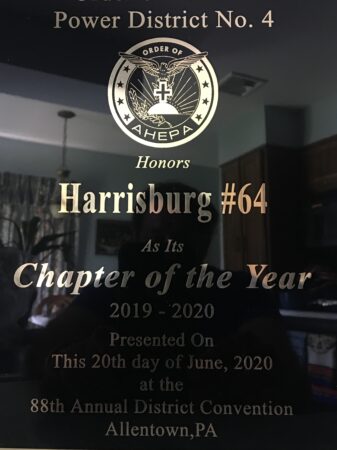 AHEPA’s purpose is to promote the ancient Hellenic ideals of education, philanthropy, civic responsibility, family and individual excellence through community service and volunteerism.”

The American Hellenic Educational Progressive Association (AHEPA) is a fraternal organization founded on July 26, 1922, in Atlanta, Georgia. AHEPA was founded to fight for civil rights and against discrimination, bigotry, and hatred felt at the hands of the Ku Klux Klan. It is the largest and oldest grassroots association of American citizens of Greek heritage and Philhellenes with more than 400 chapters across the United States, Canada, and Europe.

PDG Charles Mackenzie also awarded the ‘Chapter of the Year’ to Chapter #64 of Harrisburg at the District Convention. Chapter President Christ Megoulas accepted this prestigious award, as he along with Dr. Billys, was directly responsible for the increase of membership during this past year while the ‘Mass Initiation’ Ceremony/Banquet led to the increase of membership of 20 new members. In terms of charity and philanthropy, after having collected over $8,000 donations from the John Sempeles memorial contributions and community donations, Chapter #64 was able to give generously to over 20 locations in the Harrisburg/Carlisle areas in Pennsylvania by ‘Feeding the Needy’. Chapter #64 is also very involved with it’s BLOOD BANK and THALASEMMIA programs, as well.

Chapter #64 is also very proud also of the highly successful Prokop/Vladyka Scholarship program which continues to provide scholarships to deserving candidates on a highly productive rate. When a major benefactor John Prokop and his sister donated over $500,000 for the Chapter #64 Scholarship program, Chapter #64 became a ‘beacon of strength’ for the granting of scholarships in the Holy Trinity community. Chapter #64 is proud of the success that the AHEPA Chapter #64 Prokop/Vladyka Scholarship Program has generated by recognizing both College and graduating high school seniors for their academic/civic achievements. Chapter #64 has awarded over $120,000 over the past 5 years and is expected to award this 6th year close to $30,000 on Sunday, August 2nd, 2020 to over 30 deserving students.