Gene Rossides, 92, has passed away 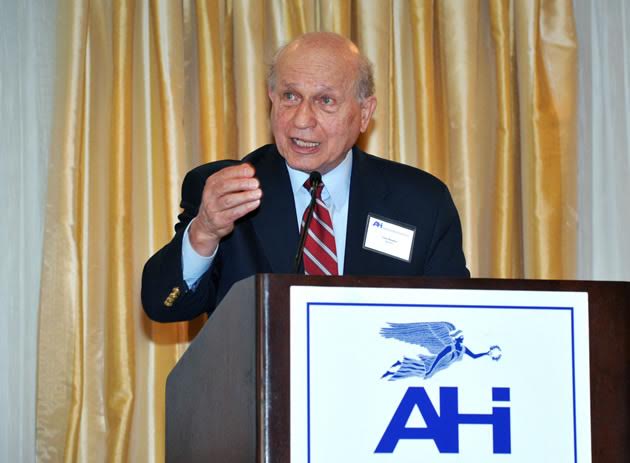 Eugene Telemachus Rossides, 92, died Saturday, May 16, at his home.  “Gene”, as he was known, was a second-generation Greek American, the son of the late Dr.  Telemachus Rossides of Cyprus and the late Anna Maravel of Sparta, Greece. He is survived by his wife, Aphrodite (Macotsin) Rossides, and their children, Michael T. Rossides (and his wife Dr. Barbara Pockaj) of Scottsdale, AZ, Alexander D. Rossides (and his wife Maria Dottori) of New York, NY, Eleni A. Rossides (and her husband Nikos Bezianis) of Kensington, MD and his daughter Gale D. Rossides (and her husband J. Lynn Cheatwood) of Southport, NC. His joy in life were his seven grandchildren, Ava Rossides, Aristotle, Demetrios and Athina Bezianis, and Zoe and Chloe Rossides. He is also survived by his brother, Professor Emeritus, Daniel Rossides of Bowdoin College, Maine.

Mr. Rossides’s life revolved around his Brooklyn upbringing, his Greek heritage, his unwavering sense of justice, and his love of football. He was an Erasmus Hall High School football star, followed by four years helming the Columbia College team as quarterback, where he became nationally known as one of the “Goal Dust Twins” with Lou Kusserow. From 1945-48, Rossides led a golden era of Columbia Football and still holds the school scoring record for a single game with five touchdowns.

He is best known for the “Miracle at Baker Field” where he led the underdog Lions to a 21-20 victory over Army in 1947, ending the Cadets’ 32-game unbeaten streak in one of the biggest upsets in college football history. Gene’s passing and on the field play-calling carried the day. Army’s legendary coach Earl “Red” Blaik remarked, “Rossides was probably the headiest quarterback at Columbia any of my teams had ever met. What he did to our Army team in the last quarter was downright remarkable. He mixed his plays beautifully. I’d seen all the great Columbia quarterbacks, but I don’t think they ever had a better one than Gene Rossides.” Rossides was inducted into the Columbia Athletics Hall of Fame and Columbia Football’s Team of the 20th Century.

In 1949, Rossides was drafted by the NY Giants, but opted instead to attend Columbia Law School on a full scholarship. He retired as a senior partner of the law firm of Rogers and Wells, now Clifford Chance, LLP, where his career spanned nearly 40 years. He served as Assistant Secretary of the U.S. Treasury Department from 1969-1973, where he supervised the U.S. Customs Service, Secret Service, the US Mint, the Bureau of Printing and Engraving, the Tariff and Trade Office of Law Enforcement, the Federal Law Enforcement Training Center and the IRS law enforcement operations. In 1970, he successfully enforced landmark anti-dumping laws. In 1972, he established the Bureau of Alcohol, Tobacco and Firearms.  Notably, in 1972 he appointed the first women to be Federal Law Enforcement Officers, inducting them into the US Secret Service.

Mr. Rossides also served as U.S. Representative and Vice President of Interpol (1969-1973); Assistant to the Undersecretary of Treasury in the Eisenhower Administration (1958-1961); and started his legal career in the New York County District Attorney’s office as Assistant AG in NY (1956-58) after serving in the US Air Force at Wright Patterson Air Force Base, Dayton, OH.

Gene was a leading Greek American. In 1974, following the unlawful Turkish invasion and occupation of Cyprus, he founded and chaired the American Hellenic Institute (AHI). Through AHI he worked tirelessly to enforce the Rule of Law to restore Cypriot territory to the Cypriot people.  His efforts led to an embargo of US arms to Turkey and earned him the highest honor bestowed upon an individual by the Republic of Cyprus in gratitude for a lifetime of dedication to Cyprus and its cause. Gene was also selected to be an Archon of the Ecumenical Patriarchate of the Greek Orthodox Church.

Mr. Rossides authored numerous articles on international tariff and trade, the rule of law, and the book “Kissinger & Cyprus – A Study in Lawlessness” (2014). He was also a founding member of the Eisenhower Institute.

A celebration of his life will be announced at a later date.

Contributions in his memory may be made to the American Hellenic Institute Foundation or the “Eugene T. Rossides Scholarship Fund” at Columbia College.