George Burlotos, founder of ‘The Greek Spirit’ in the Delaware Valley has passed away due to COVID-19 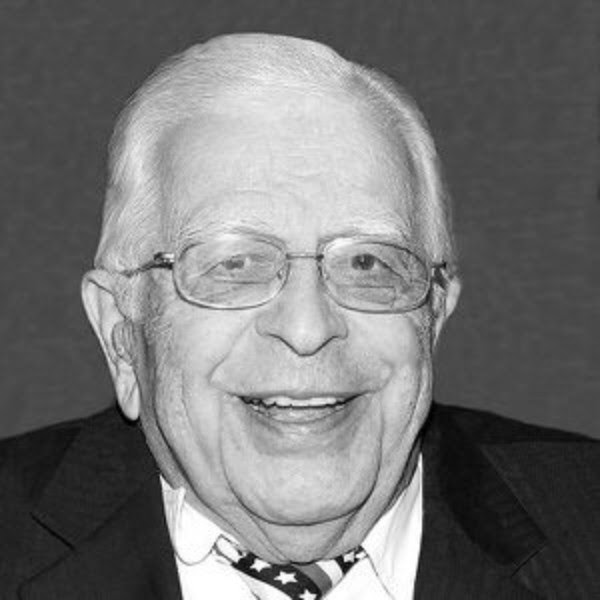 Publisher’s Note: Our sincerest condolences to the Burlotos Family. The late George Burlotos was one of the pioneers of Greek American Media in the Delaware Valley.

George Burlotos was born in Passaic, NJ, in 1923. As a child, his mother was ill with tuberculosis, so from 1929 until 1939, he lived mainly with relatives in Elika (Laconia) and Marousi, Greece. He returned from Greece as a 16-year-old teenager and attended Woodrow Wilson High School in Camden, NJ. He thoroughly enjoyed the arts, played the violin and participated in school theater productions.

In 1943, four days after graduation, George entered the U.S. Navy and served with the Amphibious Seabee forces in the South Pacific, including Guam, Guadalcanal, the invasion of Okinawa and other Pacific islands. It was while on Guam that George received word from the Naval Chaplin the tragic news of his mother’s death in May 1945 during the Communist insurgency in Greece. For his service in the Navy, George received the Asiatic Pacific Campaign Medal, the Asiatic-Pacific Ribbon with a Bronze Star for the Okinawa Campaign and the WWII Victory Medal. Upon discharge in 1946, he attended Temple University at night for five years and operated The Fruit Basket and George’s Restaurant in Camden and Cherry Hill, NJ, for several decades.

George married Matina Laskaris of Wilmington, Delaware in 1953 and is the proud father of four children (Eleni, James, Nikonia, and Alexander) and nine grandchildren. Matina passed away in 1995.

In 1949 George created the Pan-Hellenic Hour, a live radio program on WKDN in Camden, NJ. George continued the radio program for 35 years until 1984 when he started “The Greek Spirit,” a television broadcast under his direction and production. As its main correspondent and on-air personality, George was one of the most widely recognized and respected members of the Greek-American community promoting Hellenism in the Delaware Valley. “The Greek Spirit” was televised every Sunday evening reaching as far as New York, Baltimore and Central Pennsylvania. George videotaped and presented functions such as special liturgies, doxologies, dances, performing dance groups, musical events and news from Greece. After 68 years on the air, George begrudgingly retired in November 2017 at the young age of 94 when station WYBE was sold and ceased operations. George was incredibly thankful for all the support he received from his viewers and sponsors who made his programs possible.

Through the years, George was also involved in many professional, community and Greek organizations. George was the Chairman of the Cherry Hill Economic Development Board, the Chamber of Commerce and served as Vice-President of Lawn Del Savings Association. He served the Greek community as a founding member and past president of St. Thomas Greek Orthodox Church in Cherry Hill, NJ. He was a lifetime AHEPA member, serving as past president of Camden chapter and district governor of the New Jersey and Delaware District #5. He was also a proud member of the Eleftheria VFW Post 6633 Greek-American Veterans Association, The Greek American Heritage Society of Philadelphia, American Legion Post #372, The St. Thomas Senior Housing Committee as well as the St. Thomas “Kali Parea.”

For his lifetime devotion to Hellenism in the Delaware Valley and beyond, our George Burlotos was unanimously selected by the Federation of Hellenic Societies of Philadelphia and the Greater Delaware Valley as the Eleftheria Award Recipient for 2018.

AHEPA Supreme President George Horiates stated “George was an institution in the Greater Philadelphia area, we have lost a great man. His kind will never be replicated.”

Due to government directives on public gatherings, the funeral service at St. Thomas and burial at Locustwood Cemetery in Cherry Hill, NJ, will be private.

Today we lost our father, our Baba, our παππού, our patriarch, a friend to many, and a pillar of our community, to COVID-19. It is difficult to find the words to describe our loss. Baba was our best friend. He taught us so much. He loved music, poetry, history, philosophy and of course, everything Greek. He made us laugh and emphasized the importance of church and family. After losing our mother Matina 25 years ago to Parkinson’s Disease, he became the center of our universe.

We are forever grateful for his 96 ½ years God provided. Years in which he filled so fully, that you would think he had lived twice as long. His passion was his Greek heritage. It was his lifetime calling to promote Hellenism, and for 35 years he produced “The Panhellenic Hour”, starting in 1949 broadcasting live radio from WKDN in Camden, NJ. In 1984, he produced “The Greek Spirit TV” show, which was the nucleus of the Greek American Community until his reluctant retirement in 2017 at the young age of 94. For his lifetime devotion to Hellenism in the Delaware Valley and beyond, George was the recipient of the 2018 Eleftheria Award, the highest honor one can receive in the Delaware Valley.

After living in Greece most of his childhood, George returned to the United States in 1939 on the Greek Ship T.S.S. Nea Hellas. He graduated in 1943 from Woodrow Wilson High School in Camden, NJ. As a member of the Greatest Generation, he proudly served his country during WWII in the Navy Amphibious Seabee Forces. George served throughout the Pacific, including Iwo Jima, Guam, Guadalcanal and the invasion of Okinawa, where he survived horrific Kamikaze attacks. Although he loved the Navy, he most respected the Marines, who so valiantly led the way during the invasions. He often spoke of meeting other Greek American soldiers during the war and enjoyed writing letters in Greek for them to send to their γιαγιά’s. For his service, he received the Asiatic Pacific Campaign Medal, the Asiatic-Pacific Ribbon with a Bronze Star for the Okinawa Campaign and the WWII Victory Medal.

He opened up his home to countless fellow Greeks when they first arrived in America. He drank coffee with his many friends in the Kαλή παρέα, and had a social life at age 96 that we all envied. Like a true Greek American entrepreneur, he fed us from his restaurant in Camden (aptly named “George’s Restaurant”), and he brought joy to many with his fruit basket business.

Through the years, George also served his community in many professional, civic and Greek American organizations. He was the Chairman of the Cherry Hill Economic Development Board and the Chamber of Commerce and served as Vice-President of Lawn Del Savings Association. He served the Greek community as a founding member and President of St. Thomas Greek Orthodox Church in Cherry Hill, N.J. He was a lifetime AHEPA member and served as President and District Governor of the N.J. and Delaware District #5. He was also a proud member of the Eleftheria VFW Post 6633 Greek American Veterans Association.

Our father loved everyone, especially his 9 grandchildren and great-granddaughter. He was blessed by a community that enjoyed his friendship and supported his “Programa” throughout the years. He traveled everywhere with WWII Veteran hats and his “Anixto Mati” (“Open Eye”) his camera. He was never tired, never!

His larger than life personality and bottomless energy made us all feel like he just might live forever. In reality, he does. He lives in all of us, in our hearts and in our memories. His “Greek Spirit” will continue to ripple throughout the Greek American community, like the soft waves of the Laconian Sea, at his happy place in Marathia, Greece.

Our father passed away in peace, in the shadows of Camden City Hall. With a view from his window, he could see the city he spent most of his life. He was home again, with Socrates by his side.

Let’s celebrate him by carrying on his inextinguishable love of life—his eternal ζωή. As we sign off this last time, let us close with George’s own words. Let his love be our companion – η αγάπη του να είναι η συντροφιά μας.