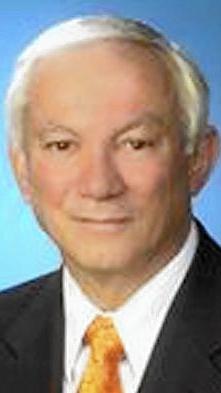 The longtime Catonsville resident was 79.

“When I heard the news, I felt as though I had lost one of my best friends,” said Baltimore County school Superintendent Dallas Dance. “He was on the board when they hired me, and we immediately hit it off. I was humbled to know him and call him my friend.”

“When he talked, people listened. He could enroll people, have them bring their ideas, and then work through those ideas toward a plan,” said Mr. Gavrilis, who came to know Mr. Moniodis through their mutual work with the Greektown Community Development Corp. and the Buddies Inc. organization. “He believed in trust and loyalty and I knew he always had my back. His death is a big loss. I’ve lost a good friend.”

The son of John George Moniodis and Androniki Demedis, both Greek immigrants, George John Monidios was born in Baltimore and raised in Greektown. His father came to Baltimore in 1925 and worked as a waiter at W.B.A. Restaurant before opening the Athens Restaurant on South Broadway. The family lived in an apartment above the restaurant, and later settled in Dundalk.

The younger Mr. Moniodis graduated in 1955 from City College, then obtained a bachelor’s degree in industrial management from the University of Baltimore in 1960.

While serving in the Army from 1961 to 1963 as a public affairs supervisor, he earned a certificate in journalism, radio and TV from the Army Public Information School at Fort Slocum, N.Y.

Prior to being named public relations director in 1969 at St. Agnes Hospital, he had served as management development assistant with the Bethlehem Steel Corp., and as a consultant to William T. Snyder and Associates, a Baltimore public relations firm.

He worked at St. Agnes as public relations director from 1969 to 1993, then served as director of government affairs for the hospital from 1993 until 2004, when he retired.

“He was known as Mr. St. Agnes,” said a daughter, Debra Moniodis of Oella.

In a resume he wrote for himself, Mr. Moniodis said his career covered all aspects of public and community relations, marketing, advertising, legislative and government affairs, and also work as an university lecturer in public relations and marketing.

Mr. Moniodis also had a career in real estate sales beginning in 1966 when he worked for RAF Realty. He later worked for Skirven Realtor, O’Conor Piper & Flynn and, from 1983 until 2010, Coldwell Banker Residential Brokers.

Mr. Moniodis’ involvement with the Greektown Community Development Corp. began nearly three decades ago. At his death, he was serving as president of its board.

“George’s work with the Greektown Community Development Corp. was about revitalizing the community, improving its economics and contributing to its social and moral goals,” said Mr. Gavrilis, a founder of the organization who is its emeritus CEO and a longtime Greektown resident.

“It was also about bringing the community together and making it a desirable place for new businesses and housing opportunities, and George was able to do this through his leadership ability and foresight,” he said. “He could see the future and wanted to keep the community vibrant. I learned so much from his leadership style because he was able to get people to give 100 percent.”

In 2010, then-Gov. Martin O’Malley appointed Mr. Moniodis to the Baltimore County school board. He served until 2015.

“He had an amazing impact on the school system and with the implementation of [its] strategic plan. I never viewed him as a boss. He always approached every issue as my friend,” Mr. Dance said. “In his heart, he had great love for the kids, and he’d always say, ‘No matter what, do what’s best for the kids.'”

“George was just a terrific human being,” said Mike Bowler, a former Baltimore Sun reporter and editor who covered education and served on the school board with Mr. Moniodis.

For more than 30 years, Mr. Moniodis had been involved with Buddies Inc., which supports the Baltimore Police Explorers program. At his death he was also president of the organization.

“Over the years, George raised hundreds of thousands of dollars for Buddies Inc.,” said vice president Joe Welkie. “Buddies teaches kids life skills that may lead to a police career one day. They are mentored by police officers who instill good values and how to become good citizens. George was someone who just liked helping people and he’d drop what he was doing to help.”

“He was very honorable and a good friend,” Mr. Welkie added. “He was proactive and the kind of guy you wanted to be like.”

He had worked on United Way of Central Maryland campaigns for years and had been a trustee of Archbishop Keough High School, Seton High School and the Woodbridge Valley Civic Association.

Mr. Moniodis was an excellent poker and Scrabble player, his daughter said. He went each day to the Double T. Diner in Catonsville to meet friends for coffee and was a member of a Wednesday pinochle group that met in a room above the diner.

A basketball fan, he enjoyed attending his grandchildren’s games.

He was a member of St. Nicholas Greek Orthodox Church, 520 Ponca St., where funeral services will be held at 11:30 a.m. Friday.

In addition to his daughter, he is survived by his wife of 55 years, the former Lillian Jaworski; another daughter, Christine A. Gormley of Clarksville; and three grandchildren.