Greece in the Culinary Olympics!

Greece in the Culinary Olympics!

Honey: by appointment to Olympus 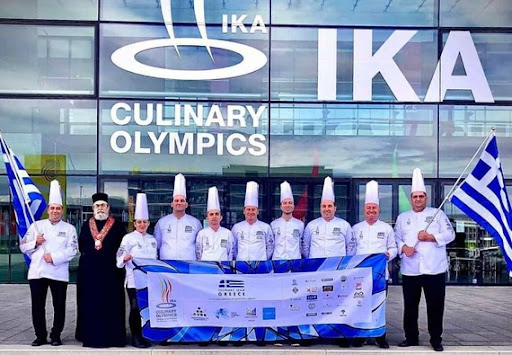 Greece’s participation in the Culinary Olympics of Russia, last week, won the intense interest of the Russian public in the internationally renowned Greek Mediterranean cuisine. The gastronomic demonstration took place from September 10 to 12 in Perm, Russia, with the participation of more than 500 chefs from the Russian Federation and countries around the world. The participants took part in a series of special competitions in culinary technique and knowledge in front of a large crowd, as the attendance of professional chefs and the public was large.

Greece’s participation in the Olympics was prepared by the GNTO Russia office and, on September 11, he participated in a master class for the preparation and demonstration of Greek dishes with Brand Exclusive Chef Christos Nano, who has been working in Russia for the last six years. The next day, September 12, EOT participated in a round table and panel discussion on the general topic “Development of Gastronomic Tourism in the Regions of Russia”. In the panel, EOT Russia had the opportunity to promote Greek gastronomic tourism, as a key thematic tourism product for the development of Greek tourism and the extension of the tourist season throughout the year.

The gastronomic presentations in Russia continue, with the participation of GNTO, in the city of Ulan Ude in the Far East of Siberia from 15-17 / 09/21, where master classes and events of the gastronomic streets program “Great Silk Road” are organized, with special interest in Greece.