“Greece to be the protagonist in a climate neutral Europe” 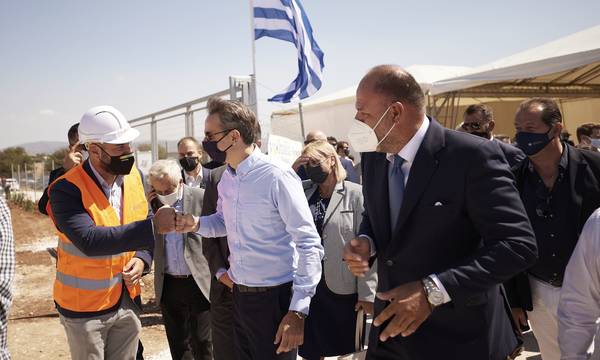 Greek Prime Minister Kyriakos Mitsotakis expressed his ambition for Greece to play a leading role in Europe’s effort to be the first continent to be climate neutral, during his speech at the inauguration of the new R Energy 1 photovoltaic unit, with a total capacity of 10 MW, in Corinth.

“It is our duty, not just national, not just European, but global, to ensure that we do not hand over to our children a planet that is literally ruined. As Europe, we have already made our own commitments. We will be the first continent climate neutral in 2050. And my ambition is for Greece to be the protagonist and not the tail in this very big effort “, stressed the Prime Minister.

He added that “there is no longer any doubt that anthropogenic emissions of carbon dioxide and other greenhouse gases contribute significantly to the increase in the average temperature of our planet”, and praised the benefits of renewable energy for both the environment and the environment. society.

Speaking about the investment of a photovoltaic park that was inaugurated today in Corinth, the Prime Minister expressed the belief that “the local communities themselves know that they can benefit from such investments”.

As he explained, they will be beneficial because they can have access to cheaper electricity, compensatory benefits, but also because in the end every investment creates jobs, either in construction or maintenance. “And it is very important that local communities help in this effort,” he said.

Mr. Mitsotakis referred in detail to the issue of renewable energy sources and stressed that we can not put renewable sources everywhere.

And for this – as he said – “and we insist very much on the right location, on the modernization of the framework governing the special spatial plan for renewable energy sources, but also on the opening of new opportunities, new challenges, such as offshore wind farms, which they enable us to take advantage of the very rich wind potential that we have in our seas “.

As the Prime Minister reminded, “Exactly two years ago, at the General Assembly of the United Nations, in September 2019, I had boldly announced our decision to get rid of lignite very quickly and to close the last unit of electricity production from lignite by 2028 at the latest. Everyone then rushed to challenge this option. “I feel that today we are right.”

Mr. Mitsotakis also referred to the transition from lignite to new forms of energy, because he stressed that lignite is very expensive.

“We were at the forefront of this European effort, securing significant resources for the fair transition of areas such as Western Macedonia and Megalopolis, and we have also been vindicated because lignite’s finances simply do not come out. “Lignite is very expensive now,” he said, adding that on the other hand, “renewable energy sources today are not just environmentally friendly, they are also cheap.”

“The protection of citizens also concerns the protection from which fluctuations in energy prices. It is the product of this extremely complex and often unpredictable process of green transition. “You know very well that the whole world – and certainly the whole of Europe – is, we are, faced with significantly increased prices for natural gas,” he said.

“We have made a commitment and announced very specific measures on how there will be no substantial impact on consumers from these increases. On the one hand using public money and on the other hand in consultation with PPC – and I estimate with the other major producers of electricity – to absorb this increase in electricity in households, businesses, so that we can, on the one hand, not affect the disposable income of the household, on the other hand not to undermine the competitiveness of Greek production, of Greek industry “said the prime minister.

“The government will always be committed in this direction, always trying to convince that this great effort that we are making needs the citizens as participants above all”, he added, while making a special reference to the young people: “The new generation is this which must come to the forefront to push, to fight, because above all, all these nice things we are talking about, we have to do for you and for the planet that we will deliver to you in some decades from now “he noted.

According to government sources in the first seven months of 2021 the participation of lignite in electricity generation accounted for only 11%, while at the same time the contribution of Renewable Energy Sources was almost three times, amounting to 32% of the total, not even taking into account the large hydropower plants.

The installed capacity of RES in Greece now exceeds 11 GW and the goal is to increase to 19 GW by 2030, as provided by the National Plan for Energy and Climate. Lignite use in Greece decreased by 49% in 2020, compared to 2019, according to the latest Eurostat data.

The installed capacity of RES will be boosted by more than 1.4 GW this year, of which about 780 MW will come from photovoltaic units and 640 from wind farms.