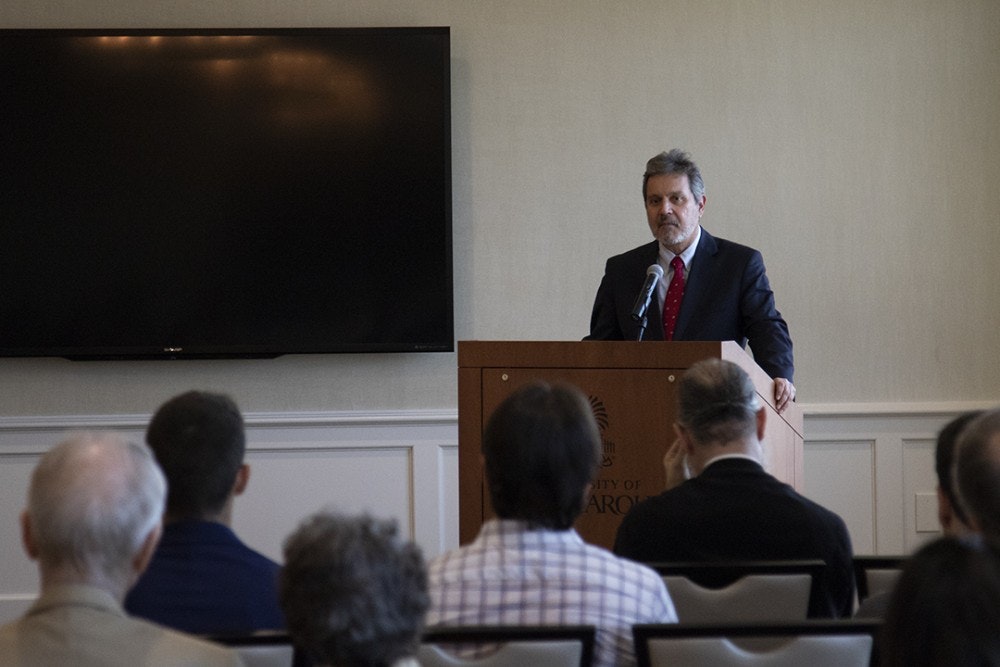 By: Hannah Dear, The Daily Gamecock

Greek ambassador to America Haris Lalacos spoke to students and faculty at USC about the current financial and migration crisis in Greece following an invitation from President Harris Pastides and Patricia Moore-Pastides.

“We met in Washington, and he asked me to visit if I could and I said ‘of course,’” Lalacos said. “I love coming to universities, I love meeting faculty and students, talk about Greece.”

Pastides’ parents immigrated from Greece to New York before he was born, but he continues to have strong ties to his parents’ country. This past summer, Pastides and his family took a trip to Greece to further explore their heritage.

This visit came just after Pastides announced his retirement from the presidency at USC.

“This has been an emotional week for me and Patricia, as you know as well, and that part of our impetus for announcing that we’ll be stepping down is to spend more time in Greece, which is the very first thing we’re planning to do as soon as soon as we leave here next summer,” Pastides said.

Lalacos was introduced by Pastides with jokes about their shared country and name. The two men studied at neighboring colleges around the same time but only became friends during their shared time in Washington recently. Lalacos attended Amherst College, where he studied history because of his childhood passion for geography.

“He grew up with a love of geography, and even before elementary school began I’m told he could recognize nearly every flag of the world,” Pastides said. “Although, as he has joked, there were far fewer flags then than there are today.”

In attendance was Aristidis Angelopoulos, a third-year international studies student on exchange from Greece. He hopes to follow in the footsteps of Lalacos and serve his country as an ambassador.

“Because I want to give and embrace a career in the international relations and diplomatic affairs I feel it will be nice to have a deeper look and to understand how the positions and the foreign policy for my country works because hopefully in the future I’m going to also serve my country like this or in another nation,” Angelopoulos said.

Angelopoulos believes students should look for opportunities to learn about the world while at USC. The ideas of democracy Greece imparted in the ancient world are what he believes are important today.

“I think because nowadays we see a lot of conflict, a lot of destruction and a lot of separation between the people,” Angelopoulos said. “We need these values of cooperation, otherwise soon or later we’re going to see another world war.”

Analisa Callender, a second-year finance and global supply chain and operations management student, attended Lalacos’s lecture after hearing about it from the cultural chair of Sigma Beta Upsilon, an international business fraternity.

“I learned so much,” Callender said. “I go to the Greek Orthodox church so I know very minimal about Greek culture, but hearing, especially about the economy which is something that you hear about the depression but you don’t hear how it grows. So it’s really interesting to see how it’s flipping around.”

Callender was grateful for the unexpected opportunity to hear from an international diplomat.

“I think it really broadens students’ horizons,” Callender said. “When are you going to get the chance to say that you even met or heard an ambassador speak, especially in South Carolina, which is so far from Washington?”