Veteran actor Thaao Penghlis chatted with this Greek-American journalist about his 2020 Daytime Emmy nomination for "Days of Our Lives," as well as his...
Read more
In Greek

George Andreakos has been in love with acting for as long as he can remember.

Ever since he was in grade school in Brooklyn he had the “acting bug”. His talent and passion for acting did not go unnoticed as he was casted as a lead or supporting actor in live plays. Yet it came a time when he had to give up acting for a while. He had a full-time job, College and started his own side business so acting did not fit into the equation.

But George was not giving up that easy. After several years the bug came back to bite.

A casting director sought him out for a small role in a feature film. After that experience he knew he had to get back in the game again.

“I decided it was time for me to continue where I left off. It is not easy especially when you have a family, a business and a mortgage to pay. Yet I believe if you want something bad enough you will figure it out. One of my main driving forces is when someone tells me I can’t do something I try even harder. I am now a Screen Actors Guild Thespian and proud of what I have accomplished thus far.”

George also had formal training in acting were he attending HB Studios and was coached by Victor Cruz. He also added a year of intense training with veteran actor Richard Kline (Three’s Company).  In the ten years that he has been at the acting game he has worked with many directors and actors. One specific director Loredana Gasparotto stood out for George because of the way she approached a project with a strong intensity. The project he worked on with her was entitled “Pentimento” which has garnered awards in film festivals in Europe. George also owes a lot to his mentor Tom Bruno who has guided him with his endless wisdom in the industry.

Besides Loredana, director Charli Brown has been another one of George’s favorites. He is currently working on a film with her called “Ombré MaFi”.  The current project he is working on “Sarah Q” is with another intense director John Gallagher (who has launched the careers of talents like Ice T, Gretchen Mol, John Leguizamo and more). In “Sarah Q” he plays Detective Garcia not his typical role he gets casted for but he is excited to tackle it. 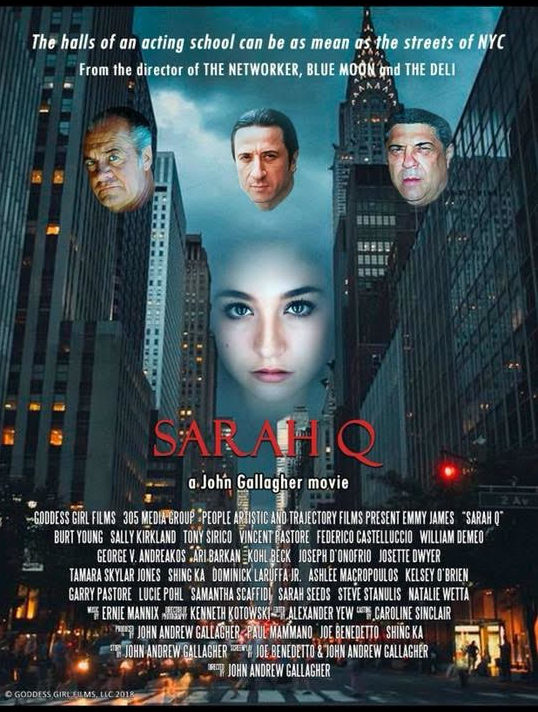 “As far as working with actors I truly enjoy working with anyone who has a passion for the art but one exception has been a best friend I made on a set a few years ago and we both agreed to continue on this journey together becoming an unstoppable force and his name is Ari Barkan! I am looking forward in working with an extremely talented good friend / mentor Garry Pastore in the film “Sarah Q”.”

As most first-generation Greek-Americans they were told to either take over the food business or become a lawyer or doctor. But George was a bit fortunate since his father was a musician and he even played guitar in his band. Hence, following into the arts was not frowned upon in his household.

For the role of Detective Garcia in the new film “Sarah Q” director John Gallagher thought George would be perfect for the role. Since George spoke Spanish John wanted to take him out of his comfort zone and show his versatility as an actor.

Besides “Sarah Q” George has a few other projects lined up like “First We Take Brooklyn” with Harvey Keitel and Ari Barkan. That film is due out in theatres in New York on 2/9/18 and in Los Angeles in 2/16/18. There is also “Alterscape” directed by Serge Levin.

For much of his career he has been casted as a mobster and had even been compared to the late James Gandolfini. But thankfully directors have seen the other side of George than the tough guy type. Currently, he has a few projects on the table which feature A-list actors in the near future. George admits that he wouldn’t be in the game without the support of his immediate family. Aside from the acting he maintains a successful Entertainment and Decor company (InternationalSounds.com).

Be on the look-out for his new film “Sarah Q” which also stars Vincent Pastore and Tony Sirico for the “Sopranos”.

by Nick Christophers George Andreakos has been in love with acting for as long as he can remember. Ever since he was in grade school in...
Read more