Growing up in the early 1980s, Andrea Fouts remembers the red plate from Waechtersbach that included the words “You Are Special Today.”

“It was sold at all the Hallmark stores and everyone would have a red plate, so whether it was your birthday, or you got good grades you would get to have your dinner on this red plate,” recalls the Orange County, California woman. 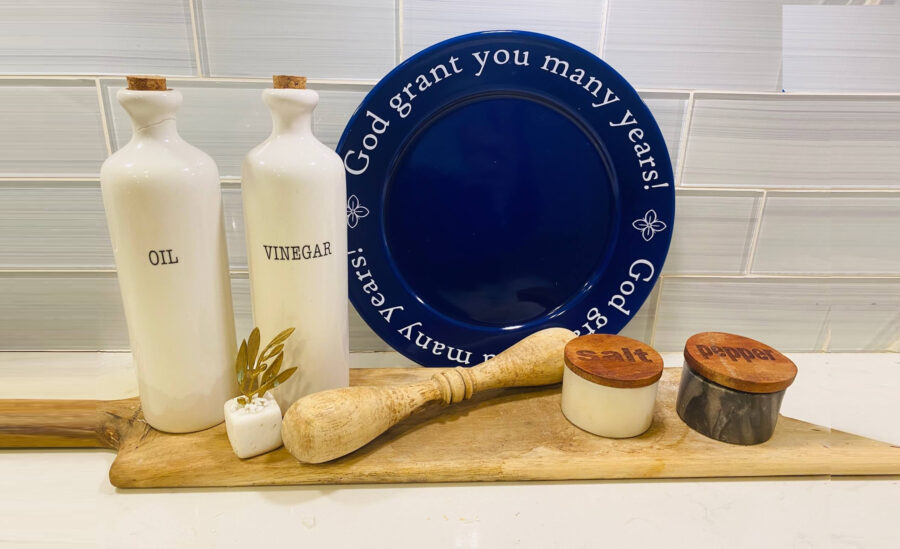 For many Greek American families, including Andrea and her mom, Eve Tibbs; the plate also showed up on their Name Day.  “There was not much you could do to celebrate your Name Day. It’s not a birthday and you’re not getting gifts so we had the plate, but it was really special.”

The red plate is no longer sold in stores and Andrea realized her own children were missing out on a special way to have their own special moment on their Name Day.

So she and her mom, Eve Tibbs, designed a Blessing Plate, a variation on the Red Plate that includes the well-known Orthodox phrase “Hronia Polla” (Χρόνια Πολλά), in English, “God Grant You Many Years.”

The plate, in blue instead of red, can be used for Name Days, birthdays, weddings, graduations and other special occasions.  They are available at Blue Blessing Plate (blessingplate.com)  with the Greek or English words.

Right now, they are marketing the plates in the Greek American community “because that’s the people we’re connected to.”

The plates have also found their way to Greece, to Andrea’s cousins in the Peloponnese.

“There’s nothing like this in Greek families,” she said.

Though targeted to Greeks and Greek Americans the Blessing Plates could expand to other Orthodox communities where the phrase is in common use. 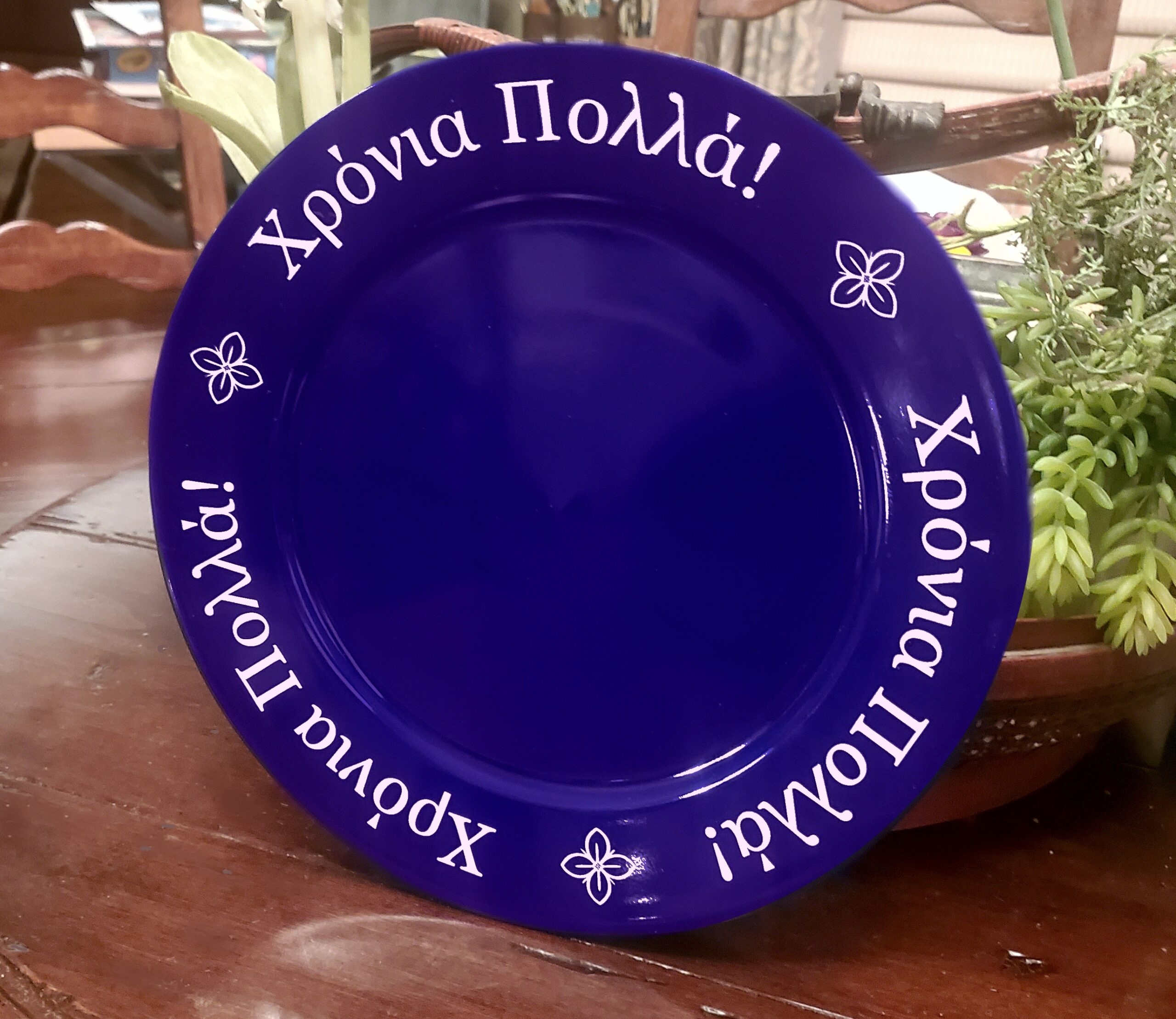 Andrea and Eve wanted the plate to resemble the original red plate which had its phrase on the rim.  That way you can eat your meal and still see the message.

Eve has design experience and the two were able to develop two versions.

“We wanted it to be appropriate to all ages. We didn’t want it to feel like a child’s plate,” Andrea said.

“We tend to select blue if it’s going to be anything Greek,” Andrea said.

The final plate design is attractive enough to be on display in the home (Andrea displays hers in the kitchen) when it’s not being used for a meal.

In Greek and English

The decision to offer the plate’s phrase in both languages comes from Andrea’s own background.  Her husband is not from Greece and the family goes to a Greek Orthodox Church that is split between Greeks and non-Greeks, those who speak Greek and those who don’t. 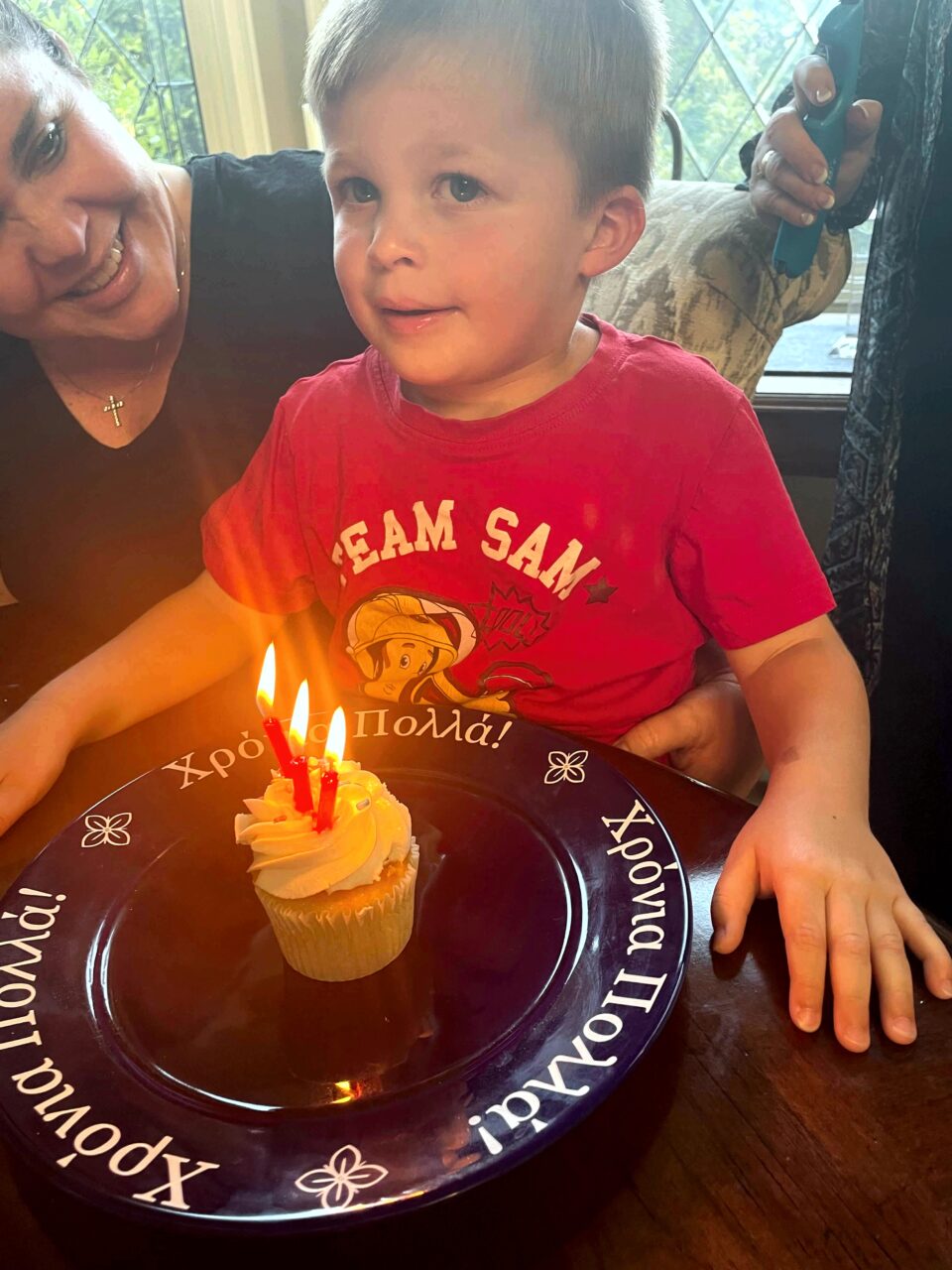 Once they had the design, they contacted a manufacturer to start producing the plates with their signature blue glaze.  It also needed to be dishwasher safe and meet the highest food-safe standards, and also be strong enough to prevent chipping.

But they were a bit overwhelmed with the first delivery.

“All of a sudden a huge freight truck delivers pallets of 3,000 plates,” she said.

The only ones available to move the plates from the bottom of a driveway to the storage unit at the top were Andrea, her parents, and her 3-year-old daughter.

“We did actually, the three of us, push one pallet up the driveway and then we’re like, ‘we can’t keep doing this.’”

So they hired a moving crew that day. 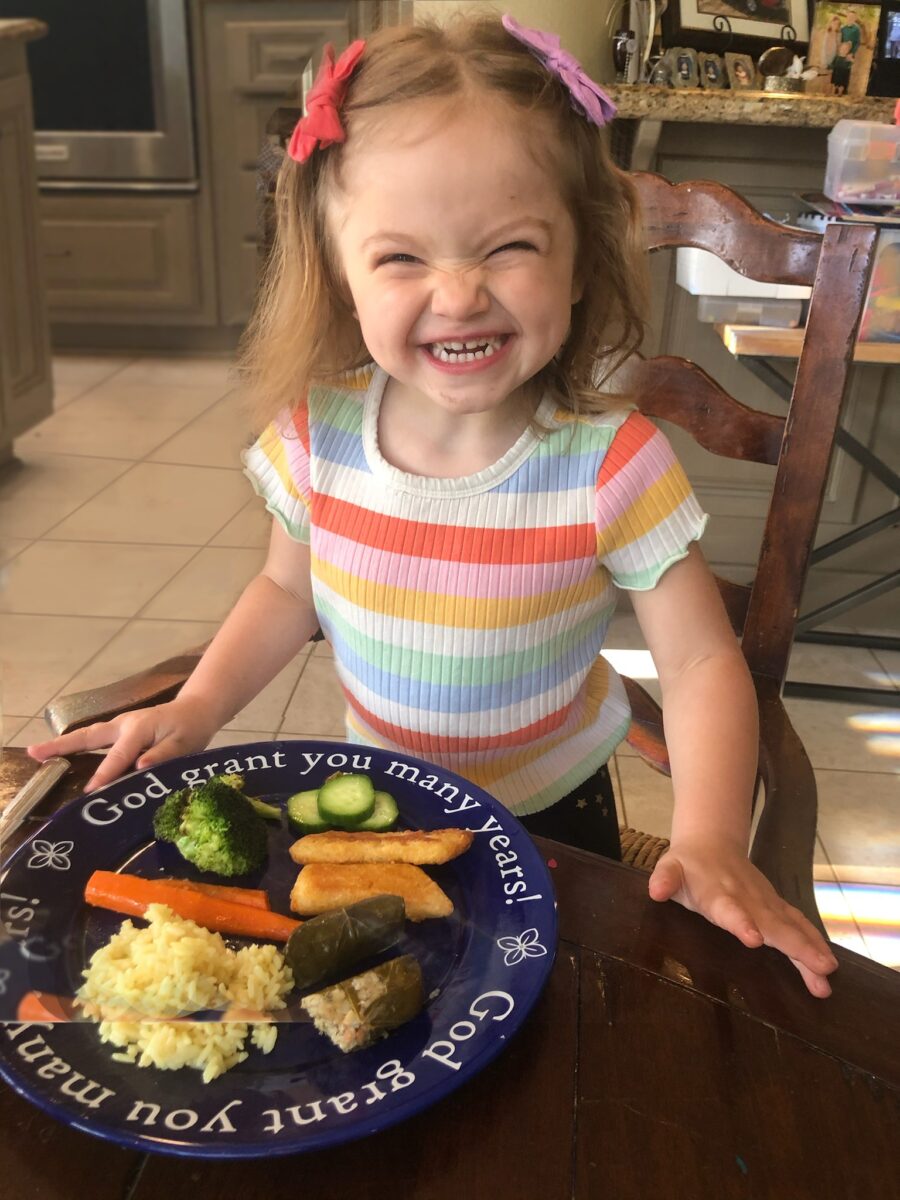 Blessingplate.com is not the family’s first business.

Andrea’s father has a business consulting firm. Her mom was a computer programmer in the 1980s, and then got a PhD in theology. She works today as a professor of Orthodox theology and has written a book to introduce Orthodox theology to the western reader.

Andrea’s husband, Derick, owns a home inspection company. Andrea has 18 years’ experience as the owner of a performing arts school for children. She sold that business and today is a drama teacher, teaching musical theater at a large high school and local community college.

“Between all of us we’ve had several different businesses,” she said, though fabricating and selling a product is new to them.

“I think on the whole our family is willing to jump in and try new things which I love about my family.” 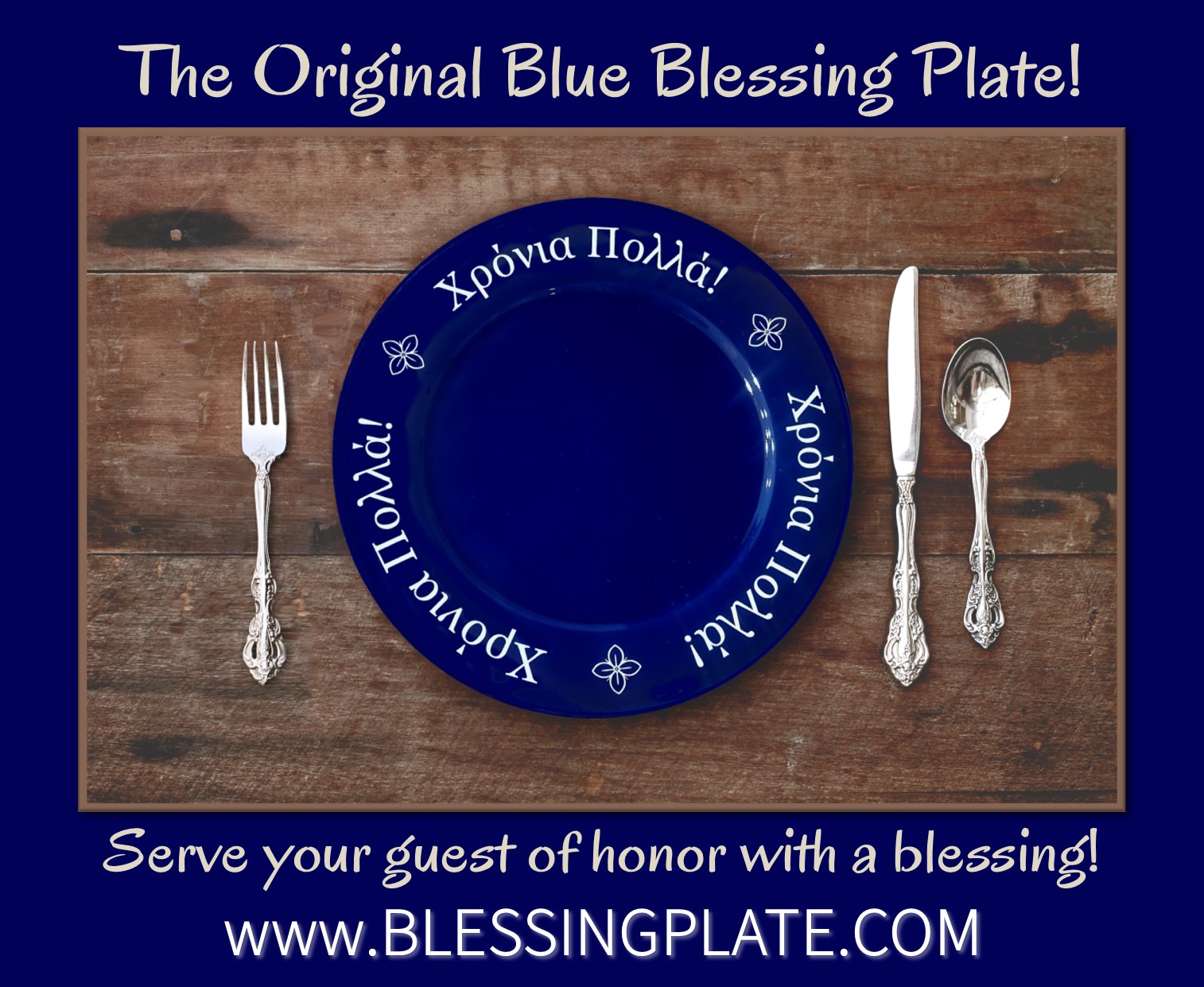 “Sales are good,” Andrea said, better than they anticipated. “It’s moving along a little faster than we expected, so that’s great.”

Most of their business is word of mouth in the Greek American community. They haven’t done any professional marketing because they weren’t sure when the first shipment would arrive.

Even so, “we’ve already sold a chunk of our shipment,” she said.

One friend posted a picture on Facebook of their new year’s bread sitting on one of the plates. Now people want to know where she got the plate.

A day after that posting, a church from Florida contacted them saying they would like to put the plates in their book store. They’ve since been contacted by several Orthodox churches.

“It’s nice because the Greek community is so tight knit throughout the whole country,” Andrea said.

Andrea’s grandparents were first generation Greek Americans, coming over to America from Greece sooner than most and her mother was born in Los Angeles. They still keep in touch with cousins, aunts and uncles in Greece.

Her brother-in-law is a priest at a nearby Greek Orthodox Church and her family Is involved in the Greek community in Orange County, largely through their church.  It’s a small community, but close-knit.

“When we see another Greek person in our town it’s so exciting,” Andrea said.

Visit blessingplate.com to find out more, check out the products and place an order.

Previous articleStaikouras: Government holding resources in reserve for the future
Next articleGreece’s Independence, and Ukraine’s