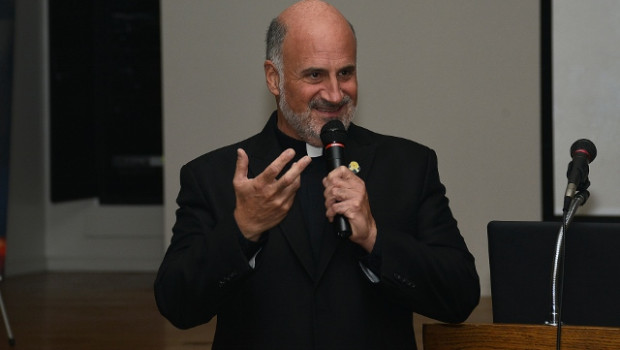 Brookline, MA – Hellenic College Holy Cross President, Rev. Fr. Christopher T. Metropulos, has been chosen to join a team of professionals who will offer live commentary on the Divine Liturgies to be celebrated at the beginning and the close of the long-anticipated Holy and Great Council of the Holy Orthodox Christian Church – the first such meeting in 1200 years. Two broadcasts will be offered on June 19, 2016 which is the Feast Day of Pentecost and June 26, 2016 the Feast Day of all Saints. Details will be sent out soon of how you can follow the broadcasts.

“I invite you to join me as we journey together through one of the most sacred services in Orthodox Christianity celebrated by His All Holiness Ecumenical Patriarch BARTHOLOMEW as the first amongst equals along with the heads of the autocephalous Churches throughout the world,” said Fr. Metropulos. “It is going to be an experience, a flashback in time for Orthodox Christians, a glimpse of a glorious future, as well as a window for those who are seeking guidance and true direction for their lives to experience the breath of the Holy Spirit.”

An internationally known radio and television personality, Fr. Metropulos will offer the English commentary for this important broadcast to the world. The commentary will be available on several websites, including Holy and Great Council Pentecost 2016, Press Office of the Holy and Great Council of the Orthodox Church Ecumenical Patriarchate, Hellenic College Holy Cross, Greek Orthodox Archdiocese of America and Orthodox Christian Network. His commentary will be directly translated into several languages.

“The ancient, historical Church of Christ will be in full view of a worldwide audience,” Fr. Metropulos explained. “This witness is important in that the heavenly will be in communion with the earthly. The Hierarch’s you will see are the direct descendants of Christ’s original Apostles, tracing their ordination in apostolic succession. It is time for mankind to witness and hear this profound voice.”

This is the third time Fr. Metropulos has been asked to provide live commentary in English for historic occasions over the past two years. In May 2014 he offered the live English commentary from Rome for the worldwide televised broadcast of the historic meeting of Pope Francis and Ecumenical Patriarch Bartholomew in Jerusalem. A few months later he was invited to return to Rome to provide the English commentary for Pope Francis’ visit to the Ecumenical Patriarchate in Constantinople (Istanbul) in celebration of the Feast Day of St. Andrew.

“The commentary will be offered in five languages Russian, French, Greek, Arabic and Spanish,” continued Fr. Metropulos. “I encourage all people to come and watch listen, read, watch and learn about the historical Church of Christ.”

The Holy and Great Council, an event expressing the unity of the Orthodox Church and its witness to the Gospel of Christ, has been in the planning stages for several decades and will mark the first time the heads and representative bishops of Autocephalous Orthodox Churches have come together for such a Council in over 1000 years.

Topics expected to be discussed include the mission of the Orthodox Church, autocephaly, autonomy, the Sacrament of Marriage, fasting, and interfaith relations.

Hellenic College is a four-year liberal arts college that cultivates the intellectual, spiritual, and moral development of its students within the Orthodox Christian community so that they might serve and contribute to society and the Church. It is the only college of its kind in the western hemisphere. Students are engaged in liberal arts and professional curricula that demand rigorous inquiry and academic scholarship. The College promotes spiritual and moral development by incorporating students into the practices, teachings, and liturgical life of an Orthodox Christian community. Hellenic College encourages its students to respond to their unique vocations by committing to education, faith, and service in all aspects of their professional and personal endeavors.

Holy Cross Greek Orthodox School of Theology is an Orthodox Christian seminary and graduate school of theology centered on the Trinitarian faith. Holy Cross educates its students to articulate and understand the biblical, historical, dogmatic, ethical, and liturgical traditions of the Orthodox Church. Students are prepared to become future Orthodox clergy and lay leaders who demonstrate faith, sensitivity, and compassion as they cultivate an attitude of offering a service of truth and love in the world. Through its graduate degree programs, Holy Cross offers men and women the opportunity to become spiritually mature persons through immersion in worship, theological studies, and service to community.

Previous articleCYPRUS – IS THE HONEYMOON OVER? by Andreas C Chrysafis
Next articlePhotographs of the first Modern Olympic Games