Honoring our Veterans event by AHEPA Family of Hempstead

Freedom is the sure possession of those alone who have the courage to defend it. –Pericles1 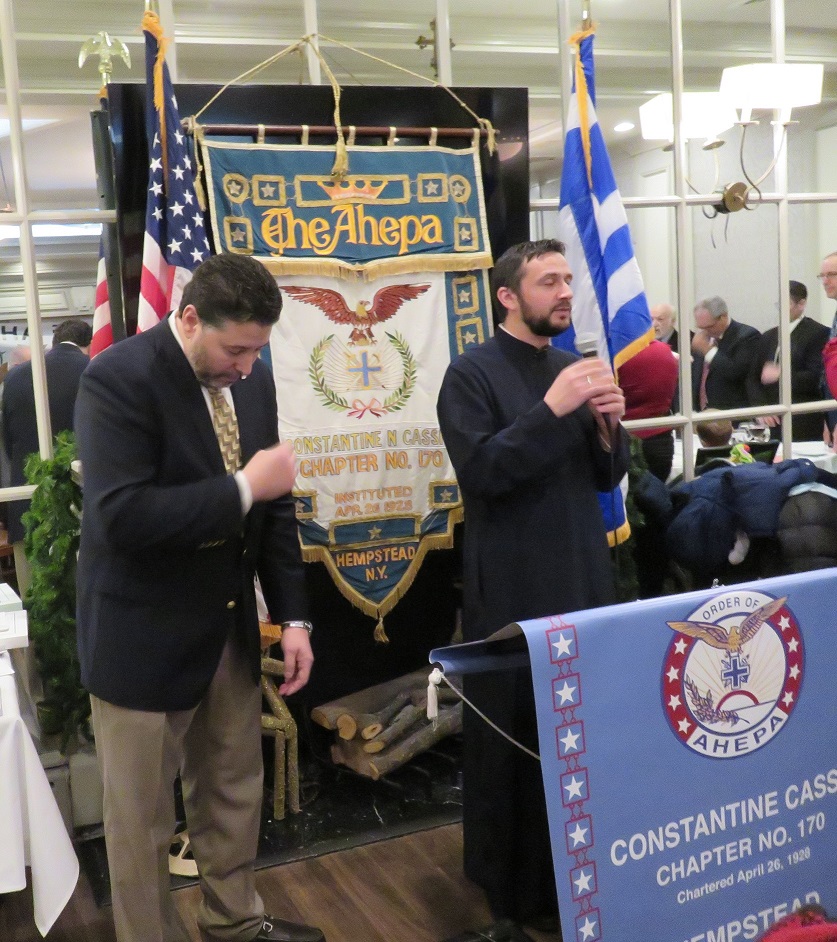 “It was my honor to be part of this memorial Christmas dinner by the Ahepa Hempstead family to honor our veterans,” said Empire District 6 Governor Dean Moskos. “My congratulations to the Hempstead chapter president Anastasis Stampolis for an exemplary event.”

“I am honored to be president at this particular historic time as our AHEPA Organization Founded on a National Level founded in 1922 is embarking on a 100-year Celebration,” explained Ahepa Chapter 170 President Anastasis Stampolis. “Our Constantine Cassis chapter is celebrating its 93rd anniversary of its founding. 93 years!! Founded in 1928. I feel truly blessed to be here and among all of you. My presidency would not be as successful or possible, had I not had the guidance and support of many of you here tonight.

President Stampolis summarized some of the AHEPA Family of Hempstead’s achievements in 2021. “The number of active brothers sworn into our Constantine Cassis Chapter No. 170 has grown to well over 125 members. In the Hellenic room at 1 pm in our Great Cathedral of Saint Paul, we initiated over 25 members into our organization. The Lord Byron chapter 233 Sons had an initiation today as well. The Maids of Athena Victory Chapter 76 will be having initiations later this week. Our Pasithea Chapter Daughters had initiations in November.  We have successfully grown the Sons of Pericles. The Maids Victory Chapter 76 is growing as well, as my daughter Anastasia is a proud new member this month.”

The of the Port Jefferson Chapter No. 319 members shares with this writer their impressions and Greek roots from Constantinople and Smyrna, Asia Minor, Karpathos in Dodecanese islands and Crete. “It’s an honor to be part of AHEPA and in the company of great persons and the community,” said  Mike Kontonicolas. John Damaskos believes “the event was a fantastic way to advance the brotherhood of Ahepa.” George Kallas explained “the greatest generation is something to never be forgotten and be forever remembered.

Kenneth Anderson worked behind the scenes to inspire this event. “I am a Vietnam War veteran and know how it feels to be recognized. When I came home, I was unrecognized by my country. No one welcomed us like the WWII veterans. I am not political. We swear to fight for our country and uphold the United States constitution. Before I went to Vietnam, I was a kid. I returned to respect the United States of America and what we have. My daughter respects her Greek heritage and says she is Greek, with the Greek flag in her room.”

We are a dynamic chapter located in the heart of Long Island in Hempstead NY. The Constantine Cassis Chapter is committed to the ideals of Hellenism, Education and to further the mission of the Order of AHEPA,” expressed President Anastasios Stampolis. AHEPA is the largest Greek American association in the world with chapters in the United States, Canada, Greece, Cyprus, and sister chapters in Australia and New Zealand. It was established in 1922 by visionary Greek Americans to protect Hellenes from prejudice originating from the KKK. In its history, AHEPA joined with the NAACP and B’nai B’rith International to fight discrimination.

The mission of the AHEPA family is to promote the ancient Greek ideals of education, philanthropy, civic responsibility, and family and individual excellence through community service and volunteerism. Anastasis Stampolis, dedicated President of AHEPA Constantine Cassis Chapter# No. 170 was the reason many of us attended. His charismatic personality is helping this chapter grow. Socrates’ tribute describes the honorees: “He is a man of courage who does not run away but remains at his post and fights against the enemy.”