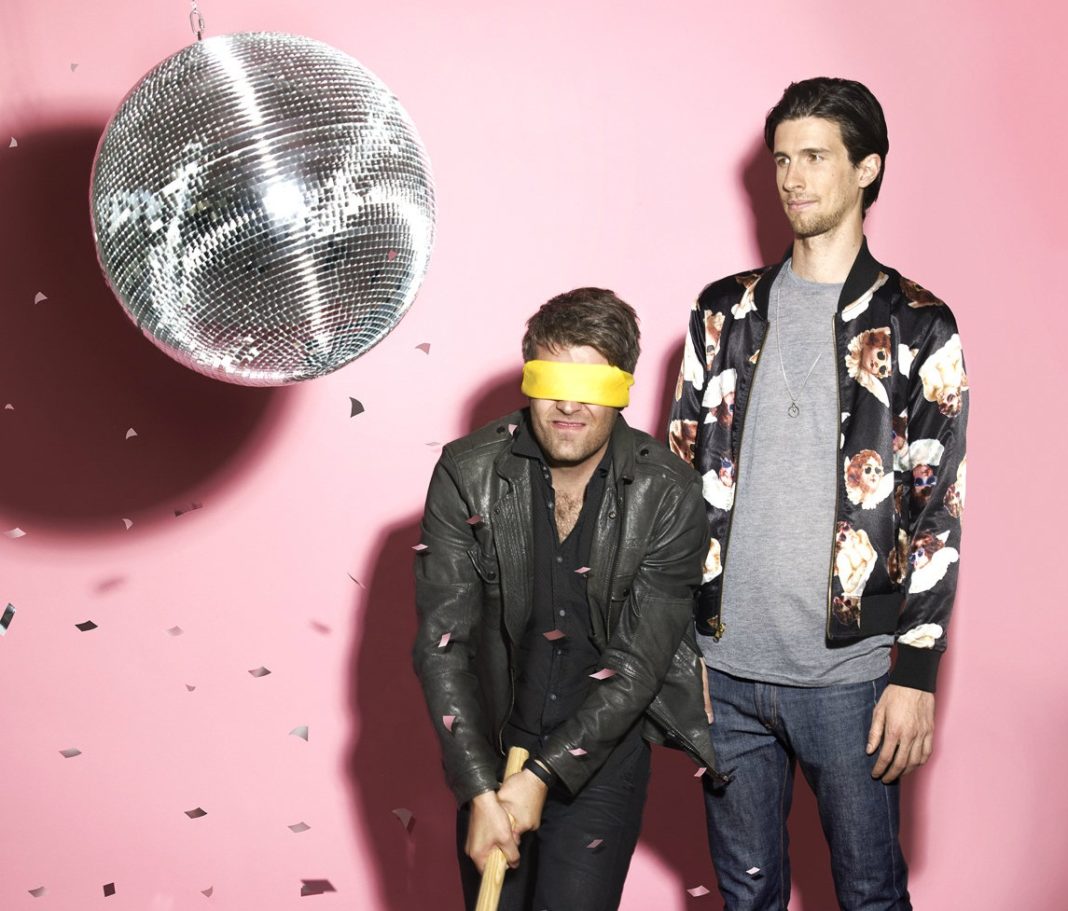 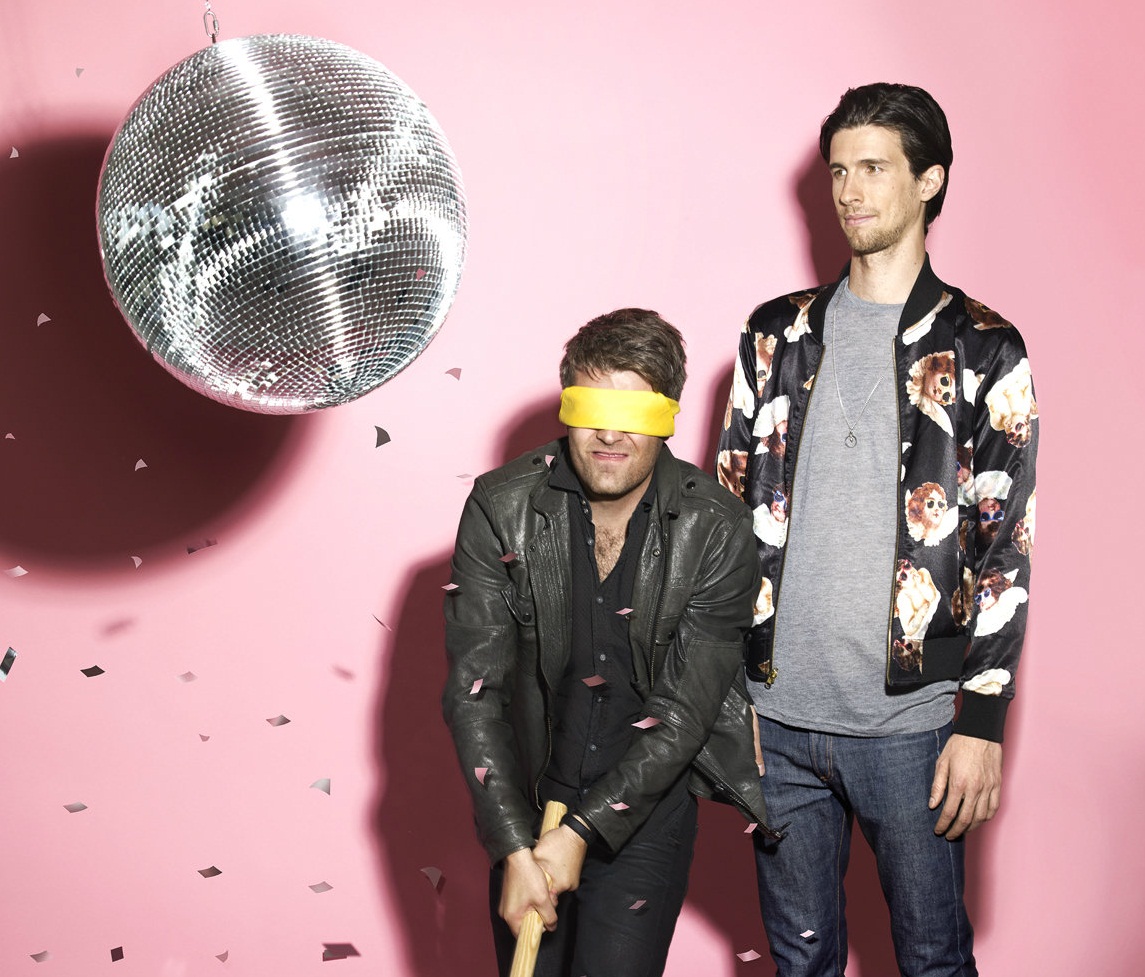 On June 17, Sean Foreman from the electro-pop duo 3OH!3 chatted via telephone with Markos Papadatos about their new album “Omens.” In addition to Sean, 3OH!3 is made up of producer Nathaniel Motte.

Throughout their career in music, their “Streets of Gold” album debuted in the Top 10 on the Billboard 200 all-genre charts and their debut studio album “Want” has been certified gold with cumulative digital track sales in excess of 6.5 million; moreover, they have sold out headlining tours worldwide and they earned a “Best Tour” nomination at the 2009 mtvU awards. Finally, in 2009, they have been nominated for a pair of MTV Video Music Awards (VMAs) in such categories as “Best New Artist” and “Best Collaboration” for “My First Kiss.” Their song “Don’t Trust Me” peaked at No. 7 on the Billboard Hot 100 charts and it has been certified triple platinum.

The CD will be released tomorrow via their record label, Photo Finish/Atlantic Records. “We have a long time working and crafting this album and we are super excited about it since we have developed a lot over the years,” he said. “Nathaniel and I did a lot of the recordings in his basement and we wrote as many songs as we possibly could. At the end of the day, we had a lot of songs to pick from and we narrowed them down and the best ones made it on ‘Omens.’”

Their current single “Back to Life” has been released to mainstream pop radio on March 5.

“This song is actually very different from anything we have previously done. It was important to try something new and this was interesting since it was the first song that we wrote for the album,” he shared.

According to Sean, he remarked, “Music has been taking many different shapes over the past decade. I love melding genres since it is what we have always done and we have brought them all together. Top 40 music these days is actually encouraging since it is very diverse. You see Gotye, Fu, Jennifer Lopez, Britney Spears and some huge dance DJs such as David Guetta. It’s great to have electronic presence on the radio and we have a lot of mix on our album.”

3OH!3 recently were the guest music supervisors for an episode of “The Real World: Portland.” “That was a really cool experience since we had the opportunity to pick the music for that episode and we gave other bands a chance to be heard on that TV show,” he said.

Their songs have been placed on such television shows as CW’s “Arrow,” MTV’s “Underemployed” and CBS’ “NCIS: Los Angeles.” “We were happy to do that. Getting our music out there is one of our main goals since we want people to hear it. We have a great relationship with MTV and they have been really supportive of our music,” he said.

They will also be headlining the Vans Warped Tour this year for a few weeks in June and July. “We love this tour since it made us who we are today. We are always happy to go back to it since there is no festival like it. It is a boot camp for bands to hone their craft and also for fans to see a great show at an affordable price,” he acknowledged.

One of their Vans Warped Tour stops will be at Long Island’s Nassau Coliseum on July 13. “I love playing out there since one of the most memorable shows we ever played a couple of years ago was in New York. I always look forward to it,” he said.

3OH!3 has scored platinum hits thanks to their collaborations with Ke$ha on “My First Kiss,” as well as on “Starstrukk,” which features Katy Perry. “We have always had cool relationships with Katy Perry and Ke$ha. We first met Katy Perry on Warped tour on one of our first tours and we became good friends with her and her band. She took us as an opening act on her first European tour. We had a lot of good times with her. We met Ke$ha a year before her music came out and we became good friends with her as well,” he said.

Sean listed Ellie Goulding, as well as Marina And The Diamonds as his dream female collaboration choices in music.

He noted that his favorite songs on the new CD include the single “Back to Life,” as well as “Eyes Closed.” “It was really cool to write ‘Back to Life,’ so I love that song. I am stoked to play ‘Eyes Closed’ the most since it goes from a super-hit production to a very minimal one. When people hear it, they will realize that it is really different vocally and hopefully when people hear it they will really like this song a lot,” he explained.

For more information on 3OH!3, visit their official website https://www.3oh3music.com/.