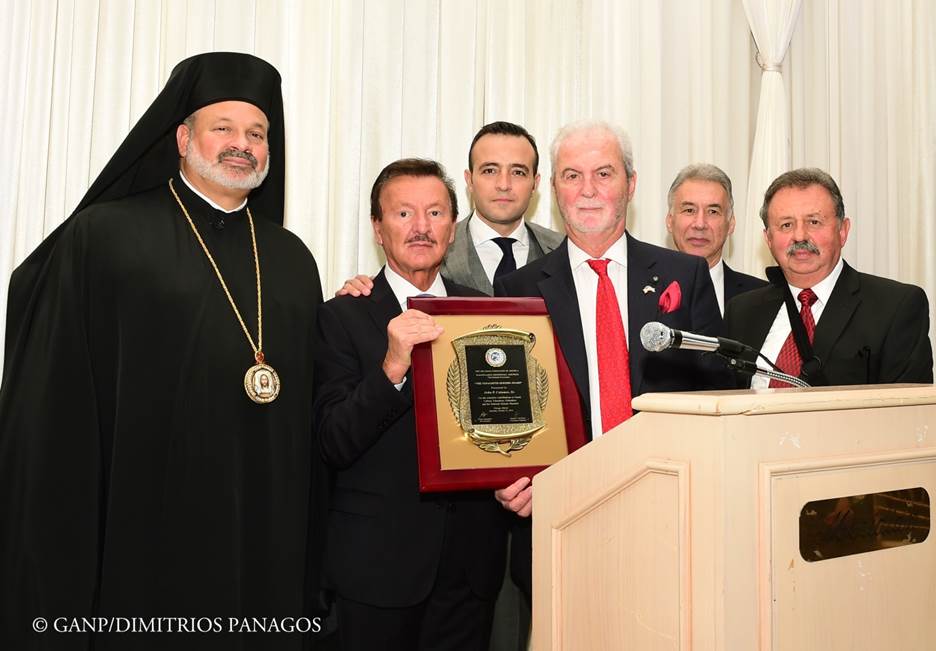 CHICAGO, IL – The National Hellenic Museum in Chicago’s Greektown is proud to announce that its Chairman of the Board of Trustees, John Calamos, Sr., was honored Saturday, October 24, 2016 by the Pan Arcadian Federation of America. Their highest award was conveyed at the group’s 73rd National Convention, organized this year by the Midwest District.

The Pan Arcadian Federation of America (PFA) is a nationwide Greek-American organization whose members descend from the region of Arcadia in the Peloponnese, southern Greece.  The fraternal non-profit is dedicated to the promotion of the ideals of Hellenism, the principles of Democracy, and the preservation of the Greek language and cultural heritage.

The first Arcadian societies were formed in urban centers to aid new immigrants, and in 1931 the Pan Arcadian Federation of America was formed to promote Hellenism among the first generations born to Arcadian immigrants.  The father of Calamos, Peter Calamos, came to the United States during World War I, from a small village near Tripoli, Greece.  Established in Chicago in 1960, the Pan Arcadian Federation continues to support the work of the General Panarcadian Hospital of Tripolis, along with providing other philanthropic and educational outreach.

Calamos has long been a supporter of a variety of Greek-American organizations and causes.  In addition to the National Hellenic Museum, he is a supporting member of The Hellenic Initiative, the National Hellenic Society, and Leadership 100.  Recently he was honored by the Order of St. Andrew the Apostle, becoming an Archon of the Ecumenical Patriarchate for his stewardship of time, talent and treasure for the betterment of the Church, making an oath to defend the Orthodox Christian faith and tradition.

Arcadians like Calamos share a great sense of pride, respect, and appreciation for their history and heritage, including a love of freedom and the desire to achieve greatness. Pan Arcardian Federation of America President Kostas Kapogianis and Convention Chairman, George Reveliotis also recognized Gregory Roumpos, the late Kostas P. Papantonious, and Dr. James G. Kallins, MD. with honors at the event.

For more  details about the Pan Arcadian Federation of America, please visit www.panarcadian.org