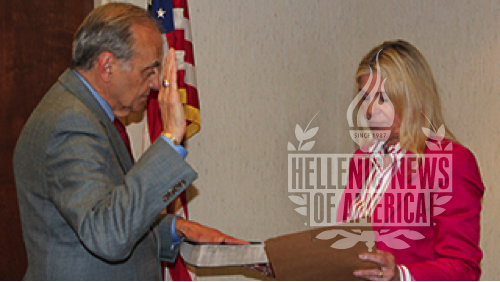 Criminal Justice Professor John Paitakes is sworn in by Robin Stacy, Esq., attorney for the State Parole Board.

John Paitakes, senior faculty associate in the Criminal Justice Department, was appointed by Governor Chris Christie to the New Jersey State Parole Board. Confirmed by the state Senate Judiciary Committee, his term began on June 23, 2016. He retires from Seton Hall on July 31.

Paitakes has worked in the criminal justice field for nearly 50 years, teaching at the University for two decades, beginning in 1996 in the Master in Public Administration program as well as sharing his expertise in the Criminal Justice program in the areas of probation, parole, corrections and juvenile delinquency. He also taught at the Somerset County Police Academy. Prior he served in the Somerset County Probation Department for 29 years, retiring in 1996 as Assistant Chief.

Paitakes had previously served on the Parole Board from 1999 to 2006. As such he has interviewed thousands of convicted individuals and incarcerated persons and has written and spoken on this topic.

“Professor Paitakes touched the lives of so many students as such an effective mentor and coach,” said Reesa Greenwald, director of the Career Center. “Over many years, he connected professionals in the field with his students, helping to get them internships and giving them a head start in deciding the direction of their lives. He worked closely with the Career Center to expand opportunities and provide students with the experiences that would help guide them to the right choices for their future.”

He often served as a go-to expert to the media including The New York Times, Christian Science Monitor, Voice of America, Star-Ledger, New Jersey Cops, Philly.com,Jersey Journal and as a regular contributor on Dish Network’s Fresh Outlook talk news show on a diverse range of topics from crime rates to sentencing to aging and incarceration.

Although honored by the appointment to the Parole Board, Paitakes expressed his appreciation to the University community.

“Teaching, counseling, advising and mentoring students over the years has been most rewarding and working with the dedicated faculty, staff and administration has been a great experience. Although moving on to another chapter in my criminal justice career, I plan on continuing my relationship and affiliation with the University,” said Paitakes.