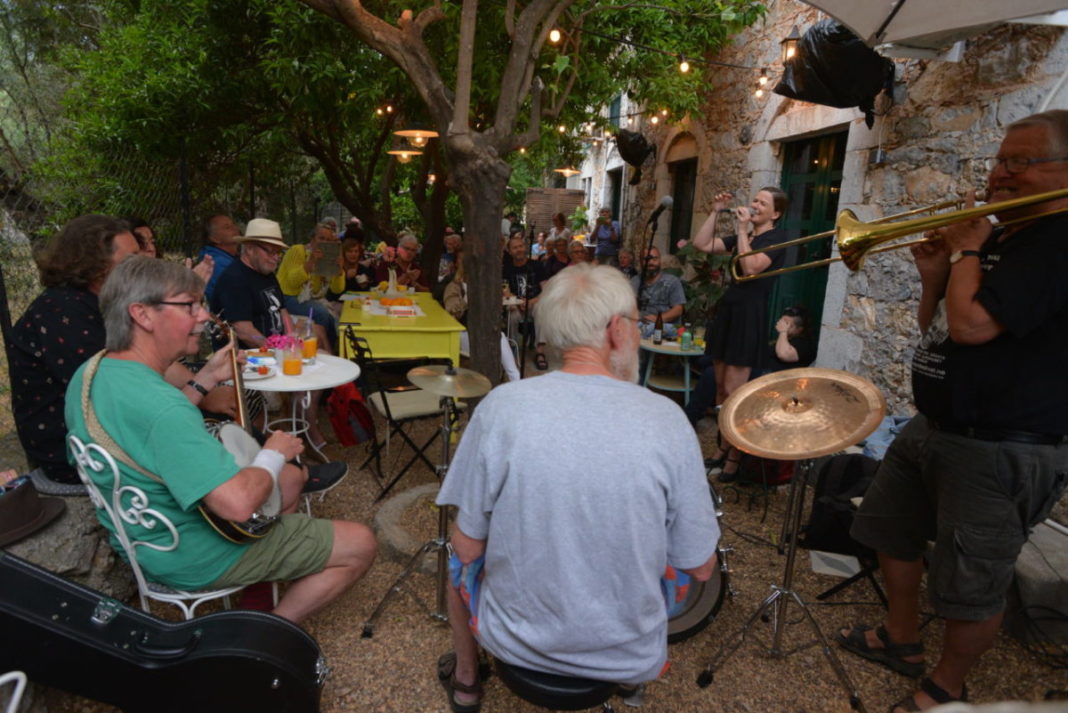 Dressed all in white, he seemed to have risen  from the pearly foam of the sea, much like the goddess Aphrodite.  In a magical setting on a rock on the Bay of Messisnia, with the many-hued Greek-sky creating a ballet of  changing colors in the background, Knut Hem rested his Weissenborn ( electric Hawaiian guitar) on his thighs and began to play his haunting tunes.

For a full forty-five minutes,  jazz fans who  came from far and wide  to the little Village of Kardamyli in the Peloponnese to hear him and other brilliant musicians play were mesmerized as they listened in silence.  There was no applause between tunes, for the sound of hands clapping would have violated the serenity of the evening and, without being told, the audience knew that.

It was the fourth Annual Kardamyli  International Jazz Festival and for eight days in May, the idyllic Village was host to thirty jazz groups (more than 60 musicians), and 8,000 jazz lovers.  Most musicians were from Norway, but they were joined by artists from Austria, Greece, and England.  Two singers  from New Orleans represented the United States.

The town threw open its loving arms and embraced one and all.  Performances occurred in sixty venues, mainly in Kardamyli, but in neighboring villages as well.  Two concerts were presented in the Farragi Hotel in the mountain village of Exochori, reached by narrow, circuitous roads and surrounded by the Taygetos mountain range. The hotel is on the edge of the Viros Ravine and if your arms were long enough, you could touch Profitis Elias, the highest mountain of Taygetos at 2407 m. Those who attended the concerts in that setting will never forget them, nor the slow, cautious rides on the narrow paths to the mountain top that were once traveled by goats.

Let’s return to  Knut Hem’s solo performance on the pebble beach outside the Psaras Taverna  because for me, it was the highlight of the eight-day festival. Hem is one of Norway’s most well-known musicians;  he identifies primarily as a “studio player,”but  created two hauntingly beautiful solo albums, “Once In a Very Blue Moon,” and “Almost On My Own.”  Mr. Hem describes himself as “first and foremost a Dobro player,” (a string instrument similar to the Weissenborn) and he is in high demand as a band player and as one of the principles in Norway’s best Blue Grass and Country bands.

The Weissenborn is an exotic instrument and cannot be mastered by everyone who attempts.  Mr. Hem, who has unique, well-honed skills, had the Weissenborn singing with emotion and passion because of his control and precise touch.  The result, in the seamless melody of tunes played during those forty-five minutes, created an overwhelming feeling of mysticism and romanticism.

Those in the audience  had a once in a lifetime experience because Mr. Hem’s performance will never be duplicated in this setting or with the same melodies.  The decision not to repeat is a deliberate one so that the memories of those fortunate to have been there are “protected”ones,  never to be altered.  In the field of  psychology, a person who chooses not to return to a place where something precious occurred is exercising what psychologists call “a protected memory.”  In other words, the joy will never be diminished because it cannot be experienced again.  For those who wish, Mr. Hem’s concert will be a musical protected memory.

The Jazz Festival and the unique atmosphere and tone in which it is presented is the brainchild of Bjarne S. Aaserod, of the Sarpsborg Jazz Club of Norway where he spent thirty years promoting entertainment before coming to Kardamyli in 2011.  The idea was born when he first stepped foot into  1866, a taverna run by a Kardamyli musician named Panagiotis, and did not hear the stains of “As Time Goes By” being played on a piano by a guy named Sam.  Mr. Aaserod said his first reaction was “This place needs a piano,” envisioning the small space not as a taverna, but as a piano bar right out of Casablanca—“You must remember this, a kiss is still a kiss…..”.

Convincing a couple of friends who knew a good deal about pianos that the atmosphere of Club 1866 would be enhanced and enriched ( and forever changed) by the addition of a piano, the three men went to a music store in nearby Kalamata and cajoled the owner to sell them a 6,000 euro brand new piano for less than 2,000 euros.  Within three hours of leaving Kardamyli, the instrument was installed (and expertly tuned by Mr. Aaserod’s friends) in Panagiotis’ Bar.  This was the beginning of the idea for the festival. As a moth is drawn to a flame, musicians are drawn to a piano  and soon not only piano players, but saxophonists, guitarists, and others were jamming in Club 1866.  “Play it Again, Sam.”

Mr. Aaserod saw the beginnings of a great festival.  “Everything was perfect,” he explained,  saying Kardamyli was a superb venue because of its small size and the enthusiastic cooperation of the local residents.  He had  contacts with the musicians in Norway—he had been working with them for thirty years—and now he discovered Panagiotis and his  unique Club 1866, and the people of Kardamyli.  All it took was the skill to put everything together in a creative mix.

I offer a quick and regretfully condensed overview of the sixty concerts:  there were quintets, quartets, sextets,  duos, and bands, playing everything from Cole Porter to Louis Armstrong.  I am a pushover for the mellow tunes of the sax—both tenor and alto—and when that is combined with a  player who caresses and not pounds the keyboard, I am transported to another dimension.  There were plenty of saxophone players, along with others horns, strings, and drums, and when these players left their groups to “jam” at the final sessions of each evening, it was fascinating to see how they all blended together so effortlessly and spontaneously.  I guess that those are the qualities that define jazz.

I was told the vocalists were among the best in Norway.  I certainly enjoyed Live Foyn Friis sing all of her soulful ballads, and when she sang “I’m in the Mood for Love,” she put everyone in the same mood.  (Suddenly, couples were cuddling).  Terje Kinn, the lead singer with the “Kardamyli Blue Grass Boys,” awakened all of my senses with his plaintive songs.  I was sure if I ever had a bad case of the blues, he would be the one who could “Help Me Make it Through the Night.”  How to sum it up?  The festival was “as easy as a Sunday morning,” with gigs  just long enough to hold one’s attention and appreciation, concerts that were within a five minute walk of each other, and comfortable venues with delicious home-made Greek food and drink.  It was relaxed, it was comfortable, it was a “Sunday morning” kind of extended gig.

All concerts were free of charge, but contributions were welcomed.  The subtle methods used by Mr. Aaserod to raise funds have worked and through his various low key  approaches, he has been able to raise 10,000 euros each year to hold the festival.  Money comes from sponsors, participants, and a raffle.  When possible, travel expenses and accommodations are covered for some musicians from Norway, but most are willing to pay their own way.  Participation is by invitation and each year musicians from countries other than Norway are invited.  This was the second year that a singer from New Orleans participated.

A typical day at the festival began with a performance at a 10 am breakfast, followed by a choice of two concerts at 1 pm.  The evenings’ entertainment began at 6, with concerts every hour until 10 pm and then the night ended with the Jam Session at Club 1866.

It is not possible to list all the groups and venues, but suffice it to say that if there was a jazz classic that was not played during the Fourth Annual Kardamyli International Jazz Festival, it was not a jazz classic.  Next year’s festival will begin on May 5.  It will not be advertised because Mr. Aaserod, the concert organizer, does not want it to grow beyond its now manageable size.

News of the next year’s  concert will spread by word of mouth.  If you plan to attend, contact View Travel to make your reservation now because many us who attended this year’s event have already secured our reservations for next year. Send an email to Alexandros Koutsos at [email protected] and he will take care of your travel and accommodation needs and advise you of the many hotels in Kardamyli and surrounding areas.  If you want to stay in the small rooms on the bay where I hang my hat, contact Luna at [email protected], or check out the facilities (and swimming pool)  at Anniska-Liakoto by visiting the website at www.anniska-liakoto.  To reserve, send an email to [email protected] 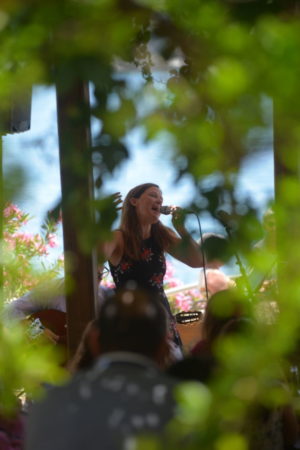 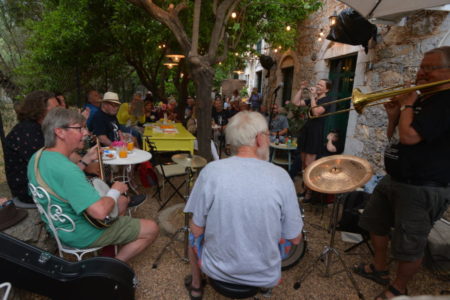 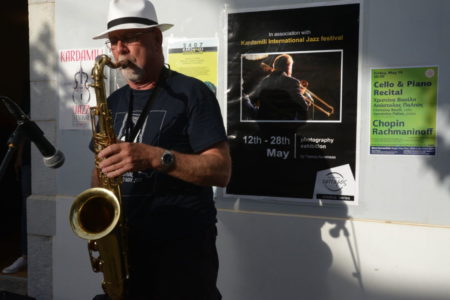 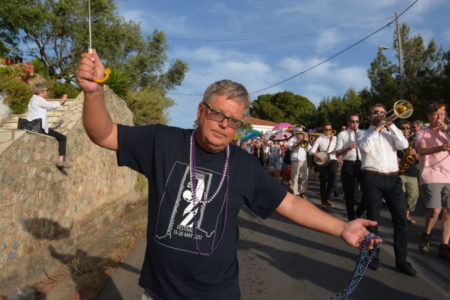