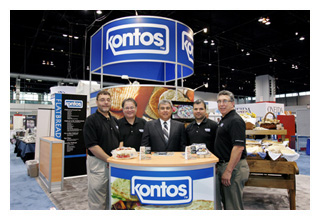 Paterson, N.J. – Jan. 25, 2018 – Kontos Foods, manufacturer of ethnic artisan breads and traditional Mediterranean foods, its owner and vice president, Steve Kontos, and the company’s controller and chief financial officer, Nancy Kontos, are being honored with the “Faith in Paterson,” award by the Greater Paterson Chamber of Commerce this January 27. The award will be bestowed at the Greater Paterson Chamber of Commerce 109th Annual Gala, to be held at Westmount Country Club in Woodland Park, N.J.

The “Faith in Paterson” honor goes to a business, organization or individual in recognition for their “contributions to economic development, job creation and the betterment of quality of life in the Paterson area,” according to the Greater Paterson Chamber of Commerce. The Chamber selected Kontos Foods because of its commitment to Paterson throughout many stages of its economic growth. Late last year Kontos announced plans for a major expansion to its manufacturing facility, which will take place over the next several years. “Some 90 percent of Kontos’ employees are residents of the Paterson community,” said Jamie Dykes, president of the Greater Paterson Chamber of Commerce. “This shows you just how much Kontos supports the area and cares for this community.”

“We’re so proud to receive this award on behalf of Kontos Foods and all of its employees,” said Steve Kontos. “Our roots have always been in Paterson,” added Nancy Kontos. “We believe in this city and want to continue nurturing the economic growth we’ve contributed toward in the past.”

Founded in 1987, Kontos Foods, Inc. is a Paterson, New Jersey-based provider of artisan breads and traditional Mediterranean foods for restaurants, hotels, food service, retail specialty stores and supermarkets worldwide. The family-owned company specializes in hand-stretched flatbreads, including the Kontos Pocket-Less Pita®, Fillo dough, pastries, olives, gyro meats, and Greek yogurts, as well as nearly 50 varieties of multi-ethnic flatbreads. Kontos, which has over 275 employees and was founded by Evripides (Evris) and Steve Kontos, who together bring over 100 years’ experience in the premium food industry. The company’s bread and Fillo products are made in the USA. Visit www.kontos.com or call (973) 278-2800.