Marina Angel:  a Fighter for Justice 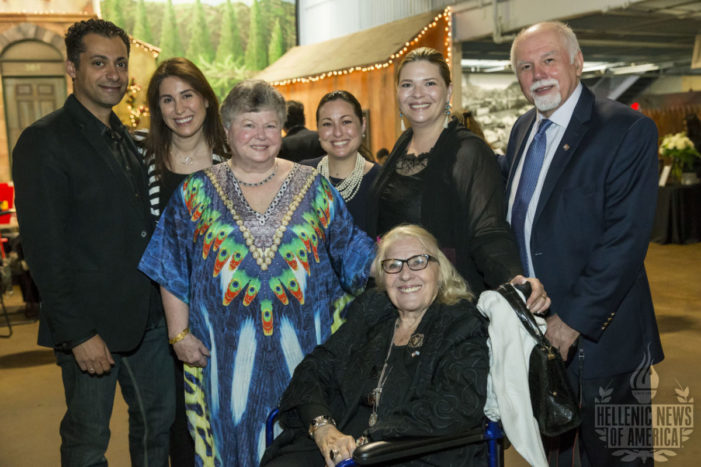 Wishes and greetings!  This month, it is my great pleasure to present an interview with Marina Angel, our compatriot who has spent a lifetime fighting for justice and the protection of women’s rights.  Marina is retiring this year from her long career as Professor of Law at Temple University, and I had the privilege of attending her recent retirement party, where many colleagues expressed their appreciation, admiration, and personal warmth for her.

Marina has fought her many battles with the spirit and tenacity Greeks know well.  They’ve been to bring justice to minority groups of all kinds.  To support and empower people who’ve often had only Marina on their side.  To give all who’ve come to her the sense that not only is a powerful voice finally in their corner, but a person who appreciates their struggle and commits herself to it.

We’re sitting together on a beautiful spring afternoon, surrounded by the Greek herbs whose scent brings memories of our native country, and whose green shoots grow as we speak.  Marina is impeccably dressed, and she notices my admiring glance at a blue bracelet.

—I bought this on an island, she says.  —To remember home.

Her voice is gentle, her look tender.  It isn’t the face of the warrior she often wears in court.

I ask her about her background.

—My father is from the Peloponnesus, she continues.  My mother was from Constantinople.  I was born in New York.  I went to Barnard College, and then Columbia Law School and Penn Law School, where I got my degree.  I took a year off from my studies at Columbia to work for the NAACP Legal Defense Fund in the South.  That was in the mid-1960s, right in the middle of the Civil Rights Movement.  I remember Archishop Iakovos marching with Martin Luther King in Selma.  He was the only outside religious leader who marched beside Dr. King then.

Later, Marina said, she went up to the Archbishop at a fundraising luncheon at the Waldorf Astoria Hotel in New York.

—I wanted to thank him for his support of the Civil Rights marchers in the face of all the hostility they’d encountered, and that he’d shared with them himself.  The Archbishop told me he’d instinctively understood what African-Americans faced, having been raised himself in the Greek Orthodox community of Turkey.  Discrimination, he’d found, was based on the same fear and hatred everywhere.

Marina and I agreed that the Archbishop had been a shining light for all, a man of rare courage and compassion whose example still lived today.

I asked Marina about her own path.

—After Law School, I worked for two years as a volunteer at the Public Defender’s Office in Philadelphia while pursuing a Master’s Degree, she said.  —I began my teaching career at Hofstra University, on Long Island.  That was in 1970.  In 1978, President Peter Liakouras invited me to join the faculty at Temple.  I already had a close connection to Philadelphia, and I was happy to return.  Summers, though, I reserved for Greece, especially for the islands.

Marina smiled with pleasure at the memory.

I asked her about her course work and her practice.

—I always worked particularly on women’s issues, both teaching and in the courtroom.  I was always engaged in questions of abuse, from harassment and stalking to rape to, unfortunately, murder as well.  Some of it was domestic.  Some of it was social.  Some of it involved discrimination and all the ways women have been held back in the workplace and in society at large.  I never lacked for clients.

For her decades of dedicated work, Marina has received many citations and awards, including the Sandra Day O’Connor Award, the Alpern Award, the Margaret Brent Woman’s Achievement Award, and awards from the Philadelphia, Pennsylvania, and American Bar Associations.  This year she received the Ruth Bader Ginsburg Award of the Association of American Law Professors.  She has been, in sum, a superb and untiring champion of human rights, and she remains an inspiration to us all.

Marina’s personal humor and charm are no less evident than her commitment to justice.  She celebrated her retirement—which in Marina’s case means only moving on to the next challenge—with what she called her “Big Fat Greek Retirement Party,” which she chose to hold in the Simeone Auto Museum in South Philadelphia with its wonderful collection of champion racing cars.  For those who might wonder at her choice of venue, the answer was obvious enough.  Marina is a woman who has always traveled at top speed, and who drives to win—not for herself, but for her clients and for justice itself.  Friends, colleagues, and former students were there, as well as judges including the Honorable Ouriana Papademetriou, all with warm remembrances, thanks, and praise.

On behalf of the Hellenic News, its editors, Pavlos Kotrotsios and Aphrodite Kotrotsios, of myself personally, and of the entire Greek community, may I simply say:  Marina, Aien Aristevein!