CommunityMarkos Papadatos honored by the Hellenic News of America at 30th anniversary...
CommunityGreeceCulture

Markos Papadatos honored by the Hellenic News of America at 30th anniversary GALA, named ‘Journalist of the Year’

On November 12, 2017, acclaimed journalist and editor Markos Papadatos was inducted into the Hellenic News Hall of Fame, as part of its 30-year anniversary. The awards GALA ceremony was held at an exquisite venue, The Merion in Cinnaminson, New Jersey. Mr. Paul Kotrotsios, MBA, is the publisher and founder of the Hellenic News of America, one of the country’s largest bilingual Greek-American newspaper and online publications. Co-publisher Aphrodite Kotrotsios made the welcoming remarks, and moderated the ceremony, along with Mr. Louis Katsos, the master of ceremonies, who presented all of the honorees with their plaques. Dr. Spiro Spireas, the grand benefactor of this year’s event, served as one of the keynote speakers.

Papadatos took home the award for “Journalist of the Year.” Throughout his respected career in journalism and editing, he has authored over 7,500 original articles, many of which were interviews with the biggest names in music, entertainment, sports and business. Papadatos is very passionate and loyal to the Greek-American entertainment community. For the past eight years, he has been the New York correspondent of the Hellenic News of America, as well as its Senior Editor. In 2017, the Powerjournalist won “Best Twitter Account” in the Arts & Entertainment category for “Best of Long Island,” and he is nominated again this year.

In his short but sweet acceptance speech, Papadatos showcased a great deal of gratitude. “Thank you so much to the Hellenic News  of America for this magnanimous honor. A special thank you to Mr. Paul Kotrotsios and Aphrodite Kotrotsios for paying tribute to my work! Congrats on the 30 year anniversary of the Hellenic News of America! I am so honored and humbled  to be a part of it. I would like to take this time to thank several people who helped me along the way. Thank you to everybody from I.S. 25, Saint Francis Prep, to Waldbaums to Queens College. A special thank you to the Greek-American Press and to Digital Journal for giving me a platform to publish my work, and to share it with the rest of the world! A journalist is only as good as his reading audience,” he said.

Papadatos continued, “I would like to say ‘thank you’ to EVERY publicist I ever worked with, with a special shout out to Ken Phillips! Would also like to take the time to thank Professor Doreen Schmitt, Herman Canosa and Dan Romano. I’d like to thank Neraki (Alex and Olga Moschos), GreeKrave (Christo Pavlatos and Spiro Markatos), the St. Nicholas Greek Orthodox Church in Babylon, as well as The Paramount, Phil Smith, Edvin Ortega and Larger Than Life, Mike DelGuidice and Big Shot, Doug Gray and The Marshall Tucker Band, Jeff Timmons from 98 Degrees, Sam Kendricks, Criss Angel, and Mulcahy’s, especially Bobby Karounos and Ricky Cappiello, for all of their support!”

“Thank you Gary Hahn for your incredible photography! Last but not least, I’d like to thank my biggest supporter, inspiration and champion in life, my mother, Effie Papadatos, who is here tonight! Mom, thank you for raising me to be a valued member of the Greek-American community. Thank you all! I love you. God bless!” Papadatos exclaimed.

Eleni Bousis received the “Philanthropist of the Year” award, while Archon Michael Psaros was honored as the “Person of the Year in Business and Philanthropy.” John Koudounis was named “Investor of the Year.” Nancy Papaioannou, the president of Atlantic Band, NYCB was presented the “Women in Leadership Award.” Chris Diamantoukos received the “AHEPA of the Year” award. For his dedication to the advancement of heart health, Dr. Thomas Phiambolis was named “Distinguished Professional of the Year.” Emerita Professor Marina Angel, legal scholar from Temple University, was recognized for her work to improve social justice for women and minorities. Dr. Michael Papaioannou was honored for his dedication to the global economy.

The evening featured multiple humanitarian opportunities such as silent auctions, in an effort to raise awareness for such causes as the Greek division of the Ronald McDonald House, the Susan G. Komen Breast Cancer Foundation, AHEPA’s Hellenic Relief Fun and Disaster Relief Fund for Lesvos, among others. 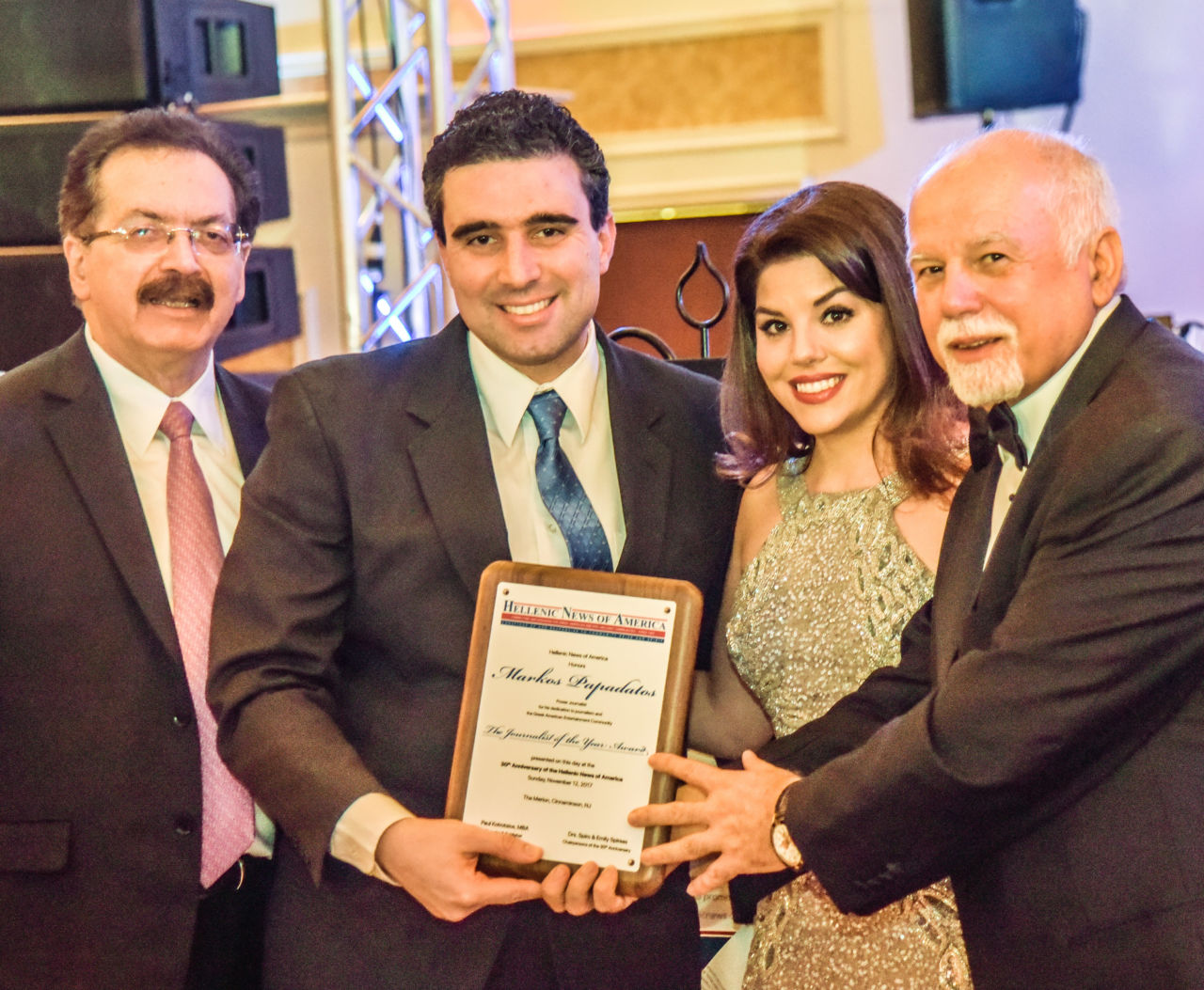 The “Eleftheria Scholarships” were also presented to several exceptional college students and high school students by the Mid-Atlantic Greek American Foundation and the Hellenic News of America.

At the end of the night, founder and publisher, Mr. Kotrotios was presented with a citation from the American Hellenic Institute Foundation by the board members.

Congratulations to the Hellenic News of America for all of these tremendous milestones! Here’s to 30 more years!