To quote the classic Tina Turner song, Markos Papadatos is “simply the best.” For the fifth consecutive year, the Powerjournalist was victorious in the “Best of Long Island” competition. He scored four wins in the “Arts and Entertainment” section this year, thus sweeping every category he was nominated in a true “Schitt’s Creek” Primetime Emmy fashion.

Affectionately known as the “Powerjournalist,” he won “Best Author on Long Island,” “Best Blogger from Long Island,” the newly-introduced “Best Poet” and the prestigious “Best Long Island Personality,” an honor that has gone to Rock and Roll Hall of Famer Billy Joel six times.

“To win all four of these ‘Best of Long Island’ categories is something that is beyond my wildest dreams. I am so thankful, honored, and humbled for this recognition. What a wonderful way to start off the New Year 2021,” he said.

“I want to dedicate all of these honors to the people and places that have molded me in my life: first and foremost, my mother, Effie, who is my biggest supporter in my life, my family, and my supportive teachers in life. Everybody at my junior high school, Adrien Block I.S. 25 Queens (Mrs. Leperides and Ms. Connell), as well as my high school Saint Francis Prep in Fresh Meadows and its teachers and its administration (Brother Leonard Conway, Mr. Patrick McLaughlin, and Dr. Joseph Castellano), as well as the amazing faculty and staff at Queens College in Flushing, which helped transform me into the journalist/editor that I am today,” he said. 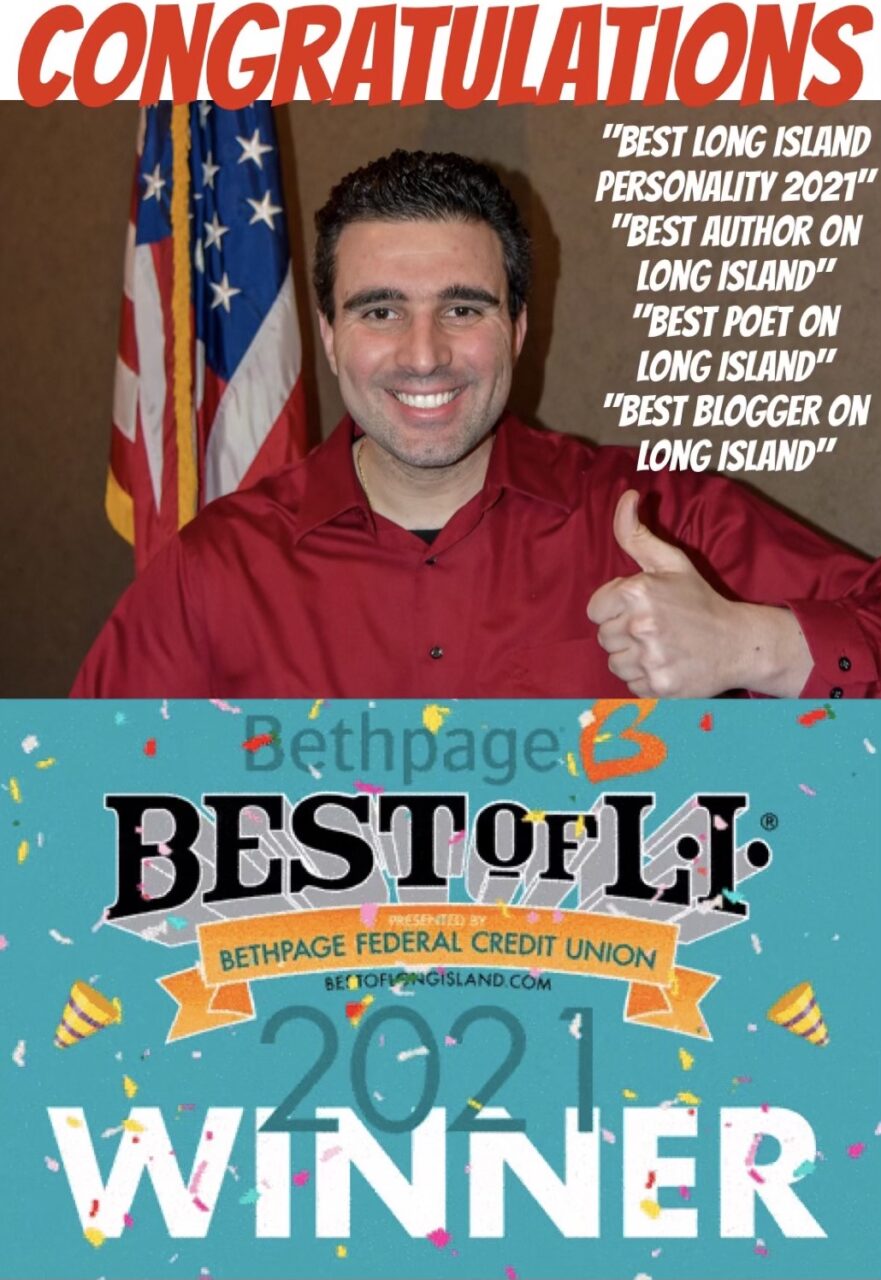 “Thank you so much, from the bottom of my heart, to everybody who believed in me and voted for me in all of these categories. I asked for votes, and all of you showered me with more love than I ever thought was imaginable,” he said, graciously.

“People ask me all the time what my proudest professional moment is in life, and to this day, it doesn’t change. It’s the same two words always: ‘leaving Corona.’ The best thing that I ever did in my life is leave Corona, Queens. Ever since, the world has been my oyster, and I’ve had the distinct pleasure to interview the greatest celebrities from all over the globe,” he said.

Papadatos serves as an Editor-at-Large of the online news publication Digital Journal, Managing Editor of Raver Magazine, Senior Editor of the Hellenic News of America, Contributing Editor of the Greek-American Herald, and he is an associate producer of “The Donna Drake Show” on CBS New York. “Eternal thanks to CEO and founder Michael Beas for taking me on to Raver Magazine back in the summer of 2019. I love it so much. Special thanks to the incomparable Dar Dowling as well,” he said. “Thank you to Donna Drake and Jessica Bellucci for welcoming me into the ‘Donna Drake Show’ family.”

Papadatos is a co-author of the motivational book, “Manifesting Your Dreams,” along with author Marla McKenna, Donna Drake, and other co-authors. Thanks to its commercial success, the book peaked at No. 1 in the following three Amazon categories “Baseball Biographies,” “Swimming” and “Grief & Bereavement.” It also landed in the Top 15 in the “Adoption” section and at No. 30 in the “Journalist Biographies” section of Amazon; moreover, the book was featured twice in Oprah Magazine.

Ever grateful and humble, Papadatos realized that it takes more than an army to accomplish this huge milestone, so he thanked everybody who helped him along the way.

Thank you to the following people:

Many thanks to everyone over at “The Young and The Restless,” “The Bold and The Beautiful,” “Days of Our Lives” and “General Hospital” for immersing me in the daytime world. Special thanks to my family over at the digital drama series “The Bay” (especially Gregori J. Martin, Kristos Andrews, Eric Nelsen, Mike Manning, Brandon Beemer, Erik Fellows, Jade Harlow, Ronn Moss, and Wendy Riche).

“Most importantly, I want to thank every single person I ever interviewed in life,” he underscored. “I love telling everybody’s stories, and I am humbled that they trust me to share their stories with the rest of the world.”

“Also, if I forgot anybody, I am extremely sorry… but please know that you are all appreciated very much. I am beyond grateful for you all,” Papadatos said, effusively.

The Powerjournalist concluded, “It took me 15 years of hard work, perseverance and diligence to become an overnight success… and 15,000 articles bylines, as of today.”