Festivals are a break from the stresses of life. A time for kids and parents to have fun. Seeing people from different places and communities makes an enjoyable time to socialize. The Transfiguration of Christ Greek Orthodox Church in Mattituck had a Food Festival with vendors on Friday through Saturday, July 8-9th. On Sunday, July 10th, free refreshments from the Festival were given out at the conclusion of church services.  Welcoming all through their generosity with free refreshments at Sunday coffee hour is a custom. Many people made the Festival a success. For the names of the parish council and volunteers, contact www.transfigurationofchrist.com and www.facebook.com/TOCCMattituck/.

“Something spiritual in our soul attracts even the most hardened criminal,” said Presbyter Rev. Andrew Cadieux at his Sunday, July 10th sermon. “Something said can not be taken back. I challenge everyone to check our mouths.” Father Andreas, as he is known to many, says many philosophical concepts that we think of during the week. He is a kind person, who is the champion of all parishioners. Greeks are builders of civilization for 2,500 years. Wherever Greeks go, they build institutions that perpetuate their civilization. A business community built a church that created a Greek neighborhood. The Transfiguration of Mattituck church, Mattituck, is the only community within walking distance, after Astoria’s churches. The Greek Community is flourishing.

“I am happy that Father Andreas is here,” said Archbishop Elpidophoros of America, on August 6, 2020. He is a new air in the community. He is a family man with children. The church is clean and is an example for all churches…. These are difficult times.”1 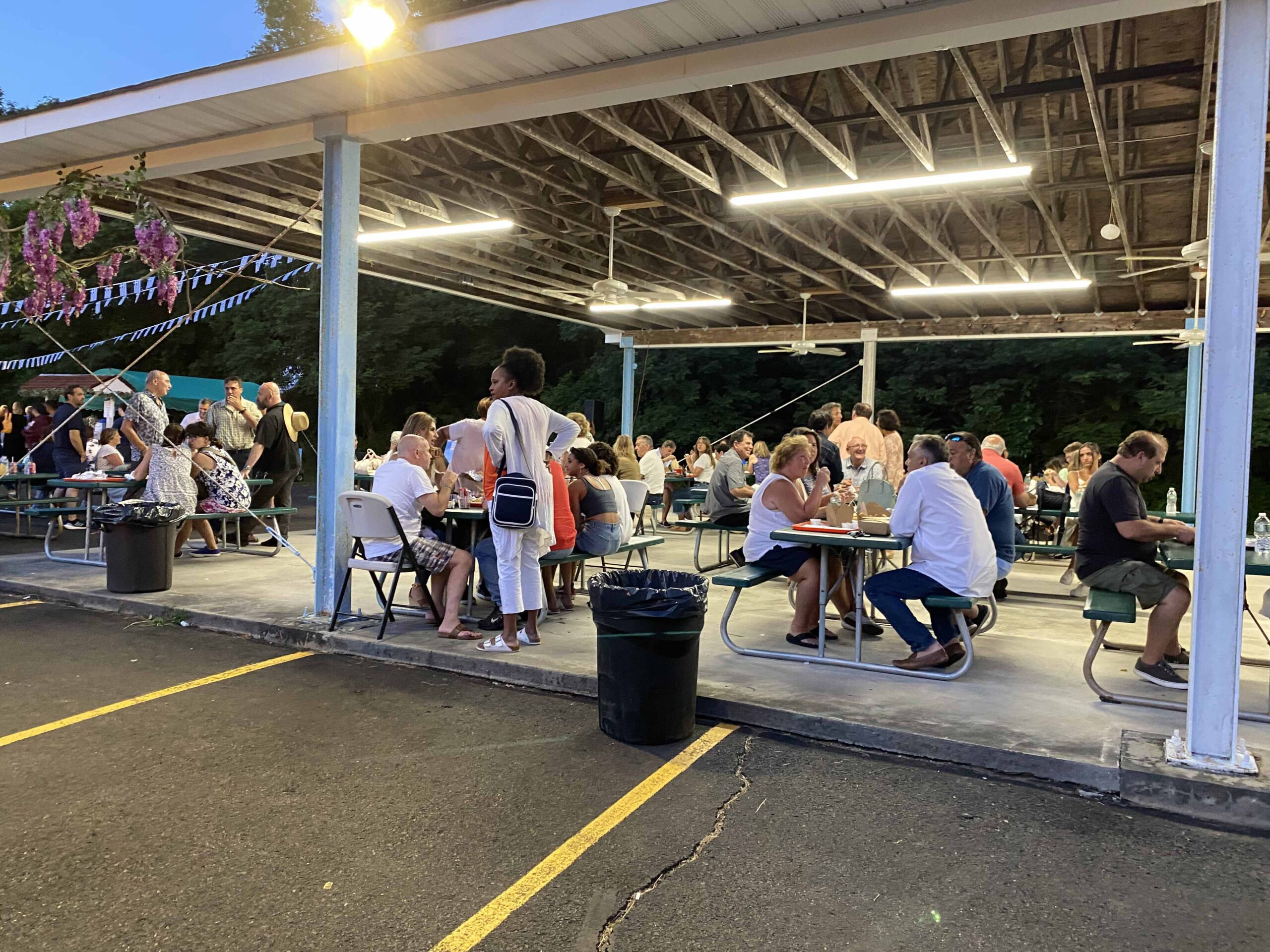 Father Andreas Cadieux is a genuine hero of the Covid-19 Pandemic. He was hospitalized for five days. He was released, quarantined, and performed Lenten services with an oxygen tank. We saw on Facebook virtual service posts created by Father Andreas on his laptop as he performed the liturgy. “When I began my ministry in January 2020, I began an outreach program to inspire parishioners to attend services,” he said. “Parishioners were coming. Then Covid-19 hit.” His Greek is excellent. He has virtual services on the Transfiguration Facebook page that inspires all.

It is the 100th anniversary of the Asia Minor Catastrophe, which eliminated Greeks in Western Anatolia, limiting their presence to Greece and Cyprus. Leo and Larissa, Eastern Orthodox Christians who come every year to the Festival, said there  “is a small pink church called Chesma after the city your grandparents came from in Western Anatolia (Asia Minor).”

Demetri and Adriana Nionakis sat with us at the Festival. Demetri, an electrician, described his family‘s 1922 experience. “My ancestors come from Heraklion, Crete. They were enslaved. Life was difficult. They heard that life was easier in Asia Minor. Greeks were allowed to have businesses. They went to and became Greek police in Greek communities. Greek police monitored all the towns on the coast of Asia Minor. No longer slavery. My grandfather was the youngest child. The Greek army had a poor strategy and went deep into Turkey in 1922. They left Constantinople, going deep into Ankara. They were driven back, into the sea. Most of my grandfather’s family did not survive. At the last moment in 1922, my 22-year-old grandfather was thrown into a boat to Chios. He went to Vrontados, Chios. Some survived and were scattered. Most did not make it. He met my grandmother, immigrating to New York in the late 1950’s.” These are some of the stories handed down from generation to generation.

A two-day Hellenic Festival that will be remembered. “Enjoy every moment you have. Because in life, there are no rewinds, only flashbacks. Make sure it is all worth it. – Anonymous