Men Who Drink from a Different Fountain: Giorgomichalis Kolokotronis and Patrick Leigh Fermor 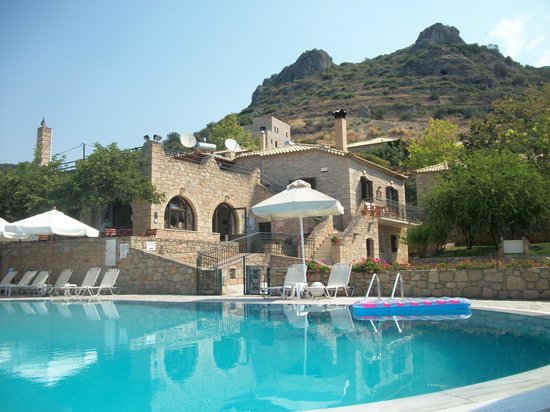 There is something mysterious about the Mani area of Greece that attracts those who drink from a different fountain—those who follow the path less traveled and climb the mountain yet to be explored.  It seems to seduce the traveler with its majestic mountains whose naked rocks cascade down the hillside to meet the turquoise sea.

One such traveler beguiled by the Mani was Patrick Leigh Fermor, acknowledged by many as the greatest of all travel writers.  At the age of eighteen, he walked from the Hook of Holland, through South Germany and Austria, to Constantinople and, along the way, fell in love with a Princess and befriended a Duchess.  Leigh Fermor also served in Great Britain’s Special Operations Unit in World War II  and joined the Cretan resistance against the Germans. He was known as “Paddy,” but the Greeks named him “Michali.”

After the war, Leigh Fermor and his wife Joan traveled through the Peloponnese in the early 1960s and when they came to Kardamyli in Mani, they stopped their search and decided to build by the Messinian Bay.  Leigh Fermor later wrote that in Kardamyli, his eyes saw “A gently slopping world of magical beauty.”  He said he knew at once that he would never leave.

Leigh Fermor’s path would soon cross that of the late Nikos Kolokotronis, a local mason and another man who drank from a different fountain.  He worked in construction all of his life in the Mani area, and the homes he designed were unique.  His style of construction and his use of local materials appealed to the man who followed the path less traveled.  So it followed that his work appealed to Patrick Leigh Fermor.

It has been written that Mr. Kolokotroniks and “Michali” and his wife “settled in tents and read Vitruvius and Paliadio,” as they talked about design.  Leigh Fermor  added, “we learned all we could from the old Mani buildings and planned the house.” Limestone came from the Taygetos mountains, a seven-foot marble lintel came from Tripoli, and most of the other materials were local.

Mr. Kolokotronis worked with an architect to design and build the Fermor home on the Messinian Bay and it is a stone masterpiece with one of the most beautiful verandas in not only Mani, but all in Greece. Four men worked with Mr. Kolokotronis on the construction and Leigh Fermor and his wife, Joan, made design suggestions.  It was completed in 1964.  An L-shaped structure, it is spacious and sprawling and gives the feeling of a cloister as one walks through the labyrinth of its rooms.  The huge, main room is the saloon were Leigh Fermor and his wife held court, entertaining their intellectual guests who came from all corners of the world.

There are gorgeous mosaics inside and out and the roof is of pantile; inside, almost every room is lined with books. The home can rightly be called “A Book House.” Almost every wall is book-lined and many have been packed away to be preserved from damage.   Accompanied by a friend, Alexandros Koutrsos, from Kardamyli, I had the pleasure of a private tour of its commodious interior by Elpida, his former housekeeper.  I experienced a thrill when I walked through his study and touched the desk where he wrote his masterworks.  (I actually touched Leigh Fermor’s desk!!!)

But back to Mr. Kolokotronis. His son, Giorgomichalis, followed his father in the construction business and was influenced by the elder’s vision of home design.  Taking some ideas from the Leigh Fermor home, and influenced by concepts favored by his father, Giorgomichalis Kolokotronis set out to create a unique environment and, thinking large, he decided upon “a village.”  It is not really a village—it is a hotel built to resemble one, with private homes or apartments perched on a hillside with panoramic views of the mountains and Messinian Gulf.  He named it Kolokotronis Hotel and Spa and built the first set of homes high on the mountain; subsequent homes cascade down the mountainside to the reception area and pool.

The hotel opened in 2002 with sixteen apartments; it now has thirty-nine. It is within walking distance of the popular Stoupa Beach and just a short drive to Kardamyli, the closest village where approximately 500 residents live and where all of the shops, tavernas, and restaurants are owned by locals.

Giorgomichalis is an unusual Greek name.  According to Greek tradition, the first son is named after the grandfather and his grandfather was Giorgos.  “Michalis” was added because Patrick Leigh Fermor, who, as I mentioned before, was known as Michalis by his Greek friends, was Godfather to Nikos’ son.   So….to honor Leigh Fermor, Nikos Kolokotronis chose this unusual, but beautiful name.

Mr. Kolokotronis has worked in construction for thirty-nine years. When it first opened,  the Kolokotronis Hotel and Spa featured sixteen unattached units or apartments and there are now thirty-nine.  The complex is characterized by elegant simplicity and the units are thoroughly modern with a single-spaced living room, dining area, and fully-equipped kitchen.  All apartments have air-conditioning, a flat-screen TV and a spacious patio.  Some units have fireplaces for guests who come off-season.

I had the pleasure of being hosted by Mr. Kolokotronis and his wife, Maria, and during my time there I relaxed in the Spa and enjoyed a hot stone massage by Krista of the magic hands. (I think I would go back to the hotel just for this massage.)  Another pleasure of the hotel was the Sunday night BBQ, a sumptuous feast of Greek specialties and grilled meats.

It was very hot during the two days I spent at the hotel.  In my apartment, however, I had comfort and the solitude I needed to write my travel articles.  It was difficult to leave and I dwelled on Patrick Leigh Fermor’s words that when he saw Kalamatis he knew he wanted to live there.  When I looked at the dramatic peaks of the Taygetus Mountains, I knew I wanted to come back.

Please visit the hotel’s website at gmkhotel.gr. To make reservations for Stoupa, Kardamyli, or elsewhere in the Mani area, contact Alexandros Koutsos at [email protected]