Meteora: Climbing the Monasteries of the Divine 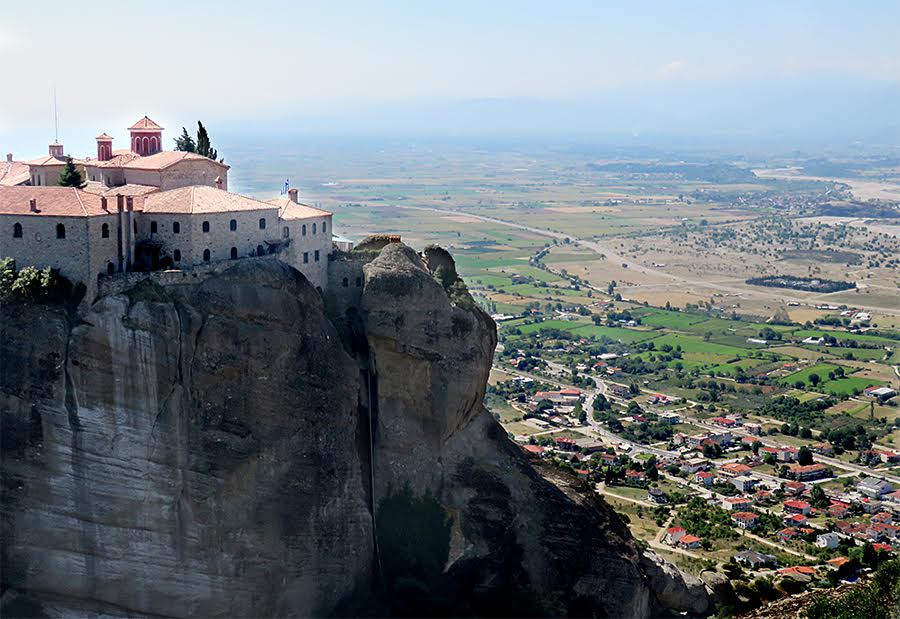 My Dear Friends and Readers,

Greetings!  The end of September is here, and the suitcases from Greece are stowed in the basement, waiting for another year.  This summer, my husband Robert and I had the great happiness of traveling with our son Kimon, our daughter-in-law Theresa, and our granddaughter Athena to one of the truly divine places not only in Greece but the entire world.  On Mt. Athos, the Orthodox Church set up its own monument to revelation, but in Meteora, Nature itself did, in the stunning sandstone outcrops and monoliths that have awed humans ever since they first beheld them.  No one knows for sure how these natural cathedrals were sculpted, though the best guess is that they are the subsidence of a great ancient lake that existed millions of years ago.  They now overlook the great plain of Thessaly that leads to the western limits of the Pindos range from which my own blood springs.

The ancient Greeks saw in the rocks of Meteora the chained bodies of the Titans, imprisoned after their defeat by the Olympic gods.  Looking closely, one can see the outlines of faces and shoulders, still heaving with exertion and frozen suffering.  But the devout Christians of the Byzantine Middle Ages looked upward instead, seeing the great rocks as pointing toward the heavens.  Over centuries, they built two dozen monasteries (and a nunnery as well) on their peaks, that communicate today and import their supplies on aerial cables that connect the entire community with a delicate web.  These were not only splendidly built, but decorated with some of the finest frescoes in Greece.  With the years, and especially the long Turkish occupation, they suffered damage and the inevitable ravages of time.  Not long ago, their heritage was in jeopardy.  But a modern conqueror, tourism, has revived interest in them, and they are now in the process of renovation and restoration, and the visitor can see modern artists and conservators breathing new life into the ancient images of devotion.

Our guide, Vasilis, showed us the magnificent treasures and answered our questions knowledgably.  Sometimes, tourists overrun the sites they’re shown, or spend all their time photographing each other.  But Meteora compels awe and respect.  Whether you prefer to think of it as a unique geological phenomenon, the prison of vanquished gods, or an invocation of the Trinity, it is a sight like no other.  Suspended above the grand vista under a perfect blue sky, we drink the cold water that Kimon has brought us, and contemplate what all observers from the most ancient times to the present have agreed is majesty.

The magnificent photos below are by Kimon!