NHSA to Hold Convention in D.C. 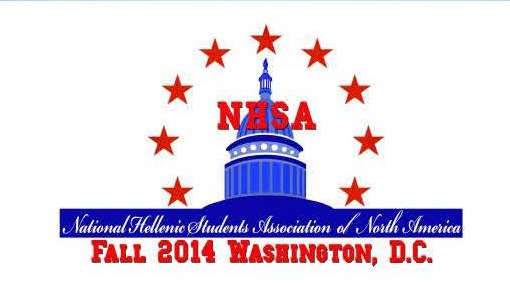 New York, NY – September 30th, 2014 – The National Hellenic Student Association (NHSA) of
North America, Inc., a not-for-profit in the State of New York, will be hosting their semi-annual
convention in Washington, D.C. from November 7th to 9th, 2014. This convention will be held in
collaboration with the Pan-Hellenism Weekend hosted by DCGreeks.com.
NHSA is an umbrella organization for Hellenic student organizations of colleges/universities in
the United States and Canada. Among other initiatives, NHSA hosts semi-annual conferences,
which are educational and professional in nature. NHSA invites students to participate in our
educational workshops and to network with professionals who are invited to attend the
convention as well. By having professionals present, students have the opportunity to discuss
their fields of interest and to develop relationships with mentors. By the end of the convention,
NHSA hopes that students will leave having learned something new and perhaps gained new
contacts in their fields of interest.
In order to make the conventions a success, the National Hellenic Student Association of North
America relies on the Hellenic community for mentorship support and financial support. As
NHSA caters to students, we try to make the convention as affordable as possible. We rely on
the generous donations of the Hellenic community to fund our conventions. Moreover, NHSA
asks professionals to provide a small amount of their time to meet with students during our
conferences. As stated before, education and professional interaction are two main goals of
NHSA.
The Hellenic youth are the driving force of the Hellenic culture, values, traditions, language, and
religion. Through our conventions, NHSA hopes to unify the members of the Diaspora to
promote such concepts.
NHSA hopes to see students and professionals at our fall convention in Washington, D.C. as well
as at the Pan-Hellenism Weekend. More information regarding these events will be available on
Facebook and the NHSA website

Editor’s Note:  We wish you the best of luck in all your endeavors Kosta!