CommunityNicos Anastasiades re-elected President of the Republic of Cyprus
CommunityCyprusFeatured

Nicos Anastasiades re-elected President of the Republic of Cyprus 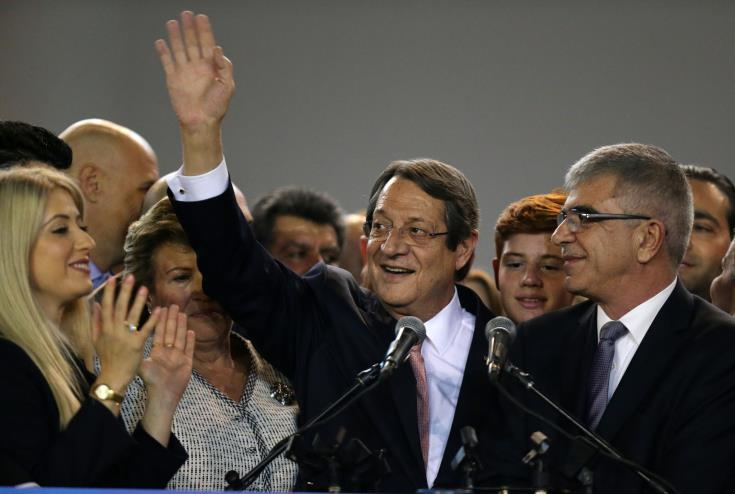 Nicos Anastasiades was re-elected President of the Republic of Cyprus, for a five year term, following his victory at the runoff presidential election held on February 4, 2018 with a majority of 55.99%. Stavros Malas, who ran against Nicos Anastasiades, secured 44.01% of the vote, while invalid votes and blank votes reached 2.65% and 2.99% respectively. Participation in the second round reached 73.97% and abstention was 26.03%

During the ceremony for his proclamation as President-elect of the Republic of Cyprus by the Chief Returning Officer Kypros Kyprianou, on February 4, 2018, at the “Tassos Papadopoulos – Eleftheria” Stadium in Nicosia, President-elect Anastasiades called for unity to address future challenges.

In his speech, he thanked the people who took part in the election process, irrespective of who they had voted for and said that he felt deeply moved, proud and grateful for the trust the Cypriot citizens had shown in him. “I am grateful to all the people who gave me a powerful mandate, a mandate to unite forces” he added, stressing that “there are no ideological colours and whatever has been said during the election campaign is erased by me tonight. What matters is, as of tomorrow, how we work to deal with the problems the young people are facing and the problems the vulnerable groups of society are facing, how we modernise the state, how we continue with the same determination to maintain the principles of meritocracy and to fight against corruption. We have to continue united and set as our priority the termination of the occupation of our country, through a solution that takes into account the concerns of Greek Cypriots regarding security as well as any sensitivities the Turkish Cypriots may reasonably have.” “I acknowledge that we still have a lot to offer and I also acknowledge that we still need to do more and that is why I insist on unity and wider cooperation,” the President underlined, adding that “only through cooperation we can secure everything we owe to the people of Cyprus.” Stavros Malas, addressing his supporters at his central election headquarters in Nicosia, said that the people’s verdict is completely respected and congratulated Nicos Anastasiades on his re-election, wishing him well in his duties and “to take good care of Cyprus.” EU Commission President Jean-Claude Juncker, European Parliament President Antonio Tajani, as well as a number of EU officials and heads of states and governments, have also conveyed their congratulations to Nicos Anastasiades on his reelection.

EU Commission President stated: “Following the renewal of your mandate, I am confident that you will continue to pursue, as skilfully as you did during your first term in office, the policies that have steered Cyprus on the path of economic growth.” He also assured that “I stand ready as ever to assist in the efforts to bring to an end the division of the island and achieve the reunification of Cyprus.”

The inauguration of the new President will be held before the House of Representatives during an extraordinary session, which will take place on February 28, 2018.