Off the Beaten Trail: Demetrios in Russia 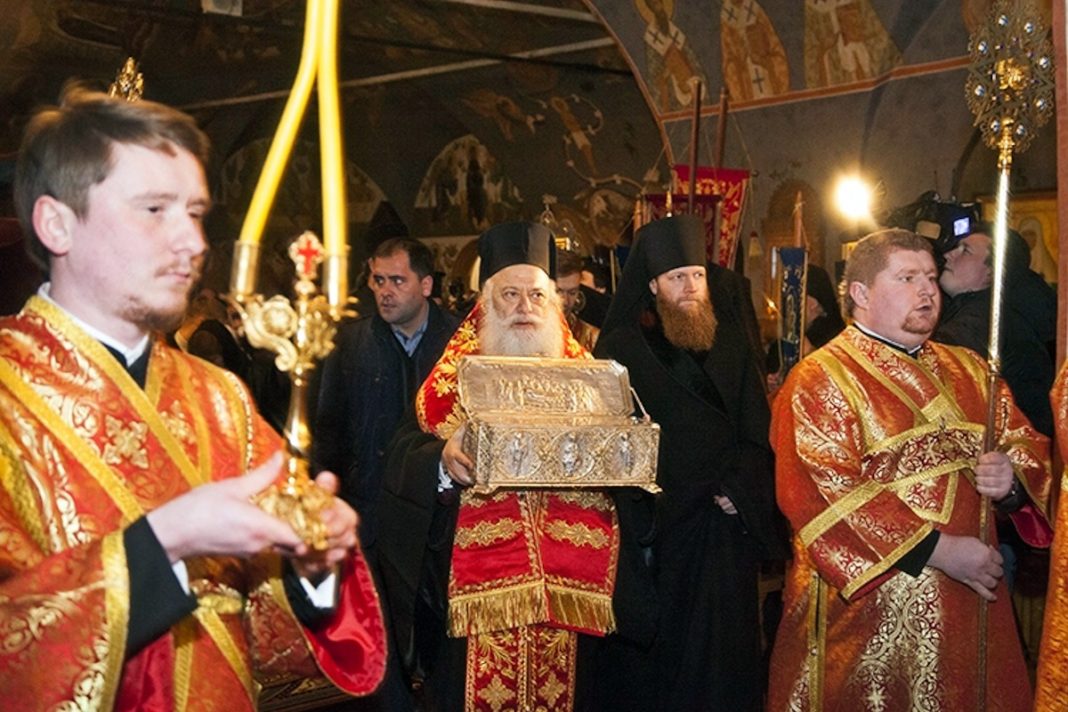 My name is Demetrios so as Jews we can blend into Russian society,” said a friend of ours from Russia. He believed it was a Russian name because of the high regard Russians, even during the communist era had of Demetrios of Thessaloniki, Greece. St. Demetrios Cathedral at 3003 30th Dr. is special to Greek-Americans of Astoria, New York. It is the only Center of Hellenism, besides the Transfiguration Church of Mattituck, Long Island and smaller churches in Ditmars, with walking distance to their homes. Residents have immigrated to other areas carrying with them their memory of the Cathedral, schools and organizations. Many believe he is their patron saint who will gallop on his horse and solve their problems, as a soldier saint as St. George.

Icons of Demetrios (Demetrius) were present in a cathedral and museum visited. The “Great Martyr Demetrius” icon was part of the Deesis tier of the main iconostasis of the Annunciation (Dormition) Cathedral of the Moscow Kremlin. This was the private church of Russian Grand Princes and Tsars. St. Demetrius was next to St. George a military saint. The icons were painted in the beginning of the 15thcentury by the Moscow School of Andrew Rublev, the follower of the great artist Theophanes the Greek of Constantinople. Irina, our group guide, showed us icons at the State Tretyakov Gallery. St. Demetrius is dressed in Roman soldier attire. The 1190’s-1200’s  Dmitrov icon of Demetrius of Thessaloniki was commissioned by Vsevolod III that was in the Annunciation (Dormition) Cathedral of the Kremlin. Tourists now see the masterpiece in the state Tretyakov Gallery.

“5 February, 2015 a Greek Orthodox Church delegation, headed by Metropolitan Panteleimon Kalpakidis of Veria and Naousa arrived in Moscow from Greece bringing a reliquary containing the hand of St Demetrios of Salonika the Great Martyr. At the airport, the superior of the Novospassky Stavropegial Monastery and the MP First Deputy Chancellor, Bishop Savva Mikheyev of Voskresensk met the delegation. From the airport, they took the reliquary to the Novospassky Monastery…. St Demetrios is the patron saint of soldiers, so, students of the Moscow M A Sholokhov Cossack Cadet Corps, pupils of the Aleksandr Nevsky Cadet Corps of the SK RF, and members of the Union of Paratroopers and the “Combat Brotherhood” came to venerate the relics. After the service, Bishop Savva thanked Metropolitan Panteleimon for giving believers the opportunity to venerate the holy relics of St Demetrios in the Novospassky Monastery, saying… the zeal of the Holy Warrior Demetrios was so great that people called him a ‘Second Apostle Paul”.1  The website is anti-Western. One must have an open mind and see the resurgence of Russian Orthodoxy in Russia after an absence of over seventy years.           Czarist Russia believed in bringing out its relics for soldiers too venerate before a military involvement.2

Metaxia, a Greek immigrant from Leonidion, Arcadia, Greece, shared her views on her russian Trip at a January meeting of the‘Geros Tou Morea Chapter #1’ of the Pan Arcadian Federation of America.  “The Russian people are tough, because they had to fight to keep their heritage alive, “she believes. Ï just finished grade school in Leonidion. I am an orphan who saw her Mother killed by guerilla fighter during the Greek civil wat. Nine children were left motherless. I am a widow of forty years. As a babysitter for wealthy families I saw the Kremlin and other museums (probably the Hermitage). This is exceptional art not seen here. The streets are clean.” Travel is a global education that enhances foreign relations. It helps the traveler grow personally and professionally. We promoted our values abroad, doing something for our country and ourselves. Seeing the meaning of St. Demetrios of Thessaloniki in russia show this country’s total change from communist atheism to Russian Orthodox Christianity.