Olympic Spirit: The Legendary Tommy Lasorda at NHM on Sept. 29 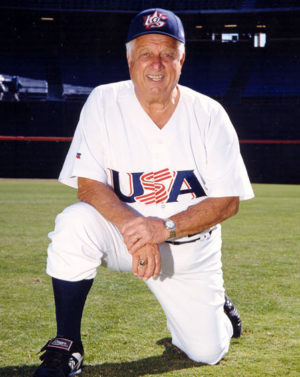 Baseball legend talks about his experience at the 2000 Olympic Games

CHICAGO, IL – Baseball legend Tommy Lasorda says leading the U.S. Olympic Baseball team to a gold medal against Cuba in 2000 was among the greatest moments of his life.

Hosted by Fox Chicago News Sportscaster and Chicago Bears TV Anchor Lou Canellis, Lasorda will talk about his Olympic experience on Sept. 29 from 6 p.m. to 8 p.m. at the National Hellenic Museum, 333 South Halsted Street. “It’s one of the greatest things that ever happened to me,” he said.

“When you manage the Dodgers, they don’t like you in San Francisco or Kansas City, but when you’re selected to manage the U.S. Olympic baseball team, everybody in the country is behind you,” said Lasorda, who managed the Los Angeles Dodges from 1976-1996. “That means more to me than anything.”

Lasorda was inducted into the National Baseball Hall of Fame in 1997 after a career that included winning 1,599 games, two World Series, and two National League pennants.

He came out of retirement to manage the U.S. Olympic Baseball team in Sydney, leading an underdog team of minor league, college and former major league players against Cuba, which went into the Games as the overwhelming favorite. The U.S. won the gold medal by defeating Cuba 4-0 in one of the most magical moments of the 2000 Olympics.

Lasorda said it was a thrill to be inside the Olympic Village, surrounded by athletes from so many countries, but it was the players on his team that made the experience so memorable. “The young players, I’ll never forget how wonderful they were and how much they respected me, how much they believed in me,” said Lasorda. “I’m so happy that I was able to lead them to a gold medal.”

This special evening with Tommy Lasorda is presented in conjunction with the National Hellenic Museum’s exhibition Olympic Revival: The 1896 Olympic Games, on loan from the famed Benaki Museum in Athens.

“We are honored to have Mr. Lasorda join us at the National Hellenic Museum and thrilled that our members and guests will get to hear his exciting and inspirational story that speaks to the Olympic spirit and the balance of body, mind, and soul,” said Rena Lee, Director of Museum Experience. “Don’t forget to come early to learn all about the first modern Olympic Games in 1896 on our second floor.”

For more information or to purchase tickets, call or 312-655-1234 or visit www.nationalhellenicmuseum.org.