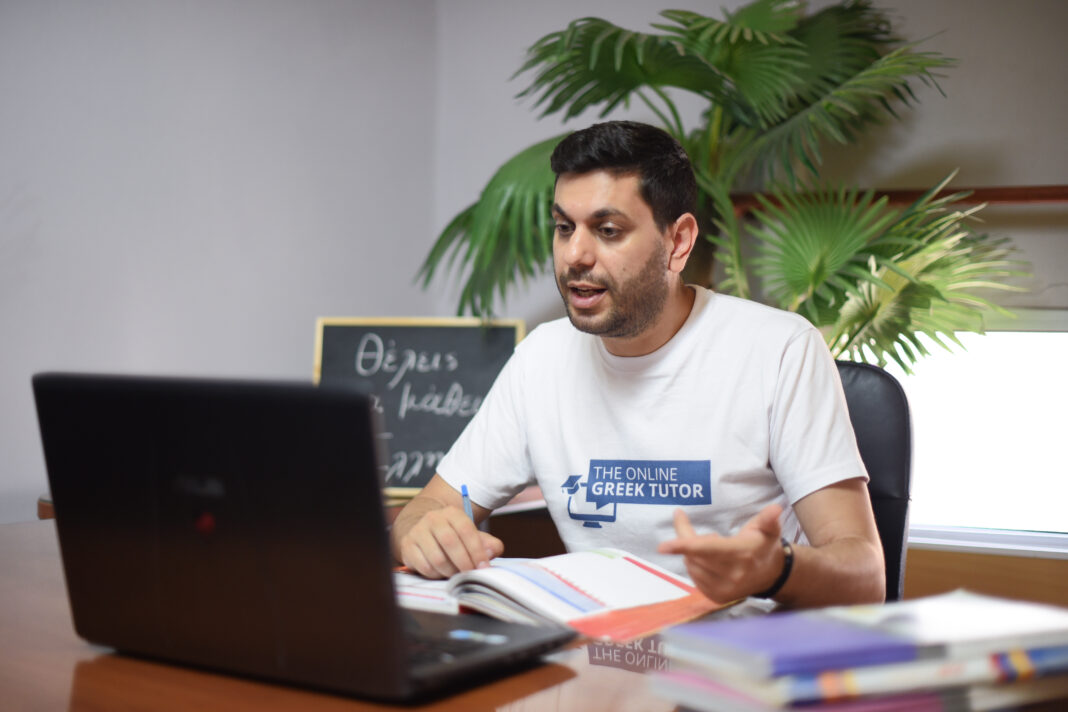 Special to Hellenic News of America

When you learn a language, you learn about the people who speak it.  Language is a tool to connect with others, says Valentinos Filippou, founder of the Online Greek Tutor.

For those with a Greek heritage, language is a link back to the homeland.

“I’m not the person to say it’s very important [the Greek language] because it comes from ancient Greece and it’s the mother of western civilization.”

“Our mission is to bring as many people as possible in connection with their relatives, their friends, and with  Greek culture and history through the Greek language.”

That’s why his online Greek language course focuses on speech first, and with listening, even as it teaches grammar, reading, writing, and more.

“Our students don’t live in a Greek-speaking country. Some of them they hear Greek once or twice a week, so we need to speak and we need to practice listening as much as possible.”

And as strange as it sounds, accuracy is not as important as fluency, at least in the beginning.

“We encourage our students to speak. It doesn’t matter. Make as many mistakes as you want. No problem. If you don’t make mistakes you will never learn,” he says.

Who are the students?

Filippou’s students come from all over the world. The largest group are those with Greek roots—Greek Americans, Greek British, Greek Australian. They are usually second or third-generation immigrants to the country.

There are also the children of recent immigrants.

“For example, after the crisis in Greece, many went abroad to work. Their children are 5 to 10 years old so they want their children to study Greek.”

Another group of students are tourists coming to Greece on vacation, and people who may buy homes in Greece so they want to learn the language.

Then there are those who admire ancient Greek history and language and want to connect with that era.

Students range in age from 5 to 85, though most skew older, in their 50s and above.

“When you are around 50 you are better financially. You’re feeling that connection with your parents. You want to communicate in Greek and make them happy.”

A connection to the homeland is somewhat unique to Greeks, that desire to identify with Greece no matter where they settle in the world.

That can mean that someone who is Greek and lives in America for 50 years considers themselves Greek, whereas someone living in Greece for 50 years, but comes from Albania, would not be considered Greek. The roots are very important.

So for those living away from Greece, there is a nostalgia to go back home. Learning the language helps fill that void.

Filippou, raised in Cyprus and living there now after several years in England, says there’s a comfort level.

“You feel people understand you better. Life is more personal here and you’re closer to each other.”

Filippou was born and raised in Cyprus. He grew up in a small village in the mountains called Odou, 800 meters above the sea.

“The whole village was 150 people. We are all relatives,” he jokes.

His father was a farmer and a beekeeper.  Filippou decided he wanted a different life so he went to Athens to study.

“I was always interested in languages and in history,” he says.

From Athens, he moved to England, earning a master’s degree in ancient history and teaching Greek in a Greek school in Liverpool.  He found he really enjoyed teaching languages to foreign students.

Moving back to Cyprus

By 2014, Filippou was missing Cyprus, especially his family, the Mediterranean weather, and the beaches.  He persuaded his wife to move back to Cyprus but there was a problem.  He was now teaching privately.  Moving away would mean losing all of his students.

That’s when the Online Greek Tutor was born, an internet-generated classroom that had no geographical boundaries.

He admits there are several advantages of tutoring online. There are a lot of tools that are easy to access, like videos. Materials are easier to deliver and receive back from students and you can communicate faster.

There’s also the flexibility.  Students don’t have to travel.

“So maybe in the time you travel to the classroom and come back, you’ve done your homework.”

Online courses are flexible so if students have to miss a class, it’s easy to reschedule.  If there’s a group session, students and staff can discuss when to meet and choose a different day if it’s not convenient.

“We have students that have private lessons, they can do it from their car, their job, from the airport.”

From Filippou’s and the teachers’ perspectives, it’s a chance to travel around the world in one day and meet people from different cultures.

On a typical day, Filippou met with someone from Australia in the morning, then an Irish woman living in Crete, then over to Russia. In the afternoon, he met someone in Britain, then California.

About the online courses

Students receive one, two, or three goal-oriented lessons a week, tailor-made to their individual needs and circumstances.

There’s emailed homework with feedback after each lesson. The courses also offer other resources students can tap into.

All of the teachers are native speakers of the Greek language and come from Greece or Cyprus. They also speak English, with some conversant in French, German or Russian.

Filippou cautions that learning a language will take time.

“It’s not something you can learn in two or three months. You have to work hard and you’ll have your ups and downs,’ he says.

“Up to B1, you can communicate competently.”

But beyond that, there’s B2, C1 and C2. “That’s for serious students of language,” he says.

Most people want to reach B1.

Today, Filippou is very happy living in Cyprus, growing his online school.  The 34-year-old can work from anywhere—home, in the village, by the sea, up in the mountains, in a coffee shop.

He’d like to continue growing the school, creating its own materials and lesson plans, getting accreditation from different organizations in Europe.

Find out more about the online Greek Tutor.