After going virtual last year due to COVID-19, the Hermes Expo was back in action as it celebrated its 30th anniversary for the first...
Read more
Community

James Polos, the executive director of Middlesex County invites you to attend the Hermes Expo on Wednesday, October 20th at the Grand Marquis in...
Read more
Culture

By Julian McBride Abstract: Lebanon is the melting pot of the Middle East when it comes to religious diversity. Through the faith of Abraham, Muslims,...
Read more

The first golden age of Greek civilization was the aftermath of the Greek victory over the Persian Empire of kings Darius and Xerxes in early fifth century BCE.

The contest was long, bitter, and decisive. It almost shred the Greek world into opposing pro-Persian and anti-Persian coalitions. Persia was a world superpower that no country, large or small, could ignore.

Greek democratic poleis (city-states) in Ionia in Asia Minor convinced Athens to help them resist Persian domination. Athens did and Persia responded with a ton of bricks. It launched huge armies all over Greece. This grave danger brought enough of the Greek states, especially the mainland powers of Athens and Sparta, together to fight or die for their freedom. They defeated the much larger armies and navies of imperial Persia.

Athens saw the opportunity of taking advantage of its great contributions to defeating such a mighty foe like the Persians. Its trireme navy, the most advanced and powerful in the Mediterranean, promised security to vulnerable Greek cities in Ionia neighboring Persia, as well as the island-states of the Aegean.

Athens brought all these small states in the Delian League for common defense. Sparta stayed out of the Delian League. It did not like this Athenian initiative, but withdrew to its Peloponnesian dominion.

When Delian allies offered Athens funds instead of participation in guarding the Aegean, Athens agreed. The exceptional Athenian leader Pericles used those funds for rebuilding Athens and, especially, building the Parthenon on the Acropolis. The Persians had burned Athens and the Acropolis.

The public works on the Acropolis was an expression of a general self-confidence of democratic Athens. The polis of Athena wanted to be the best among Greek states. Its philosophers attracted students from all over the Greek world. They explored and advanced the knowledge of the cosmos, the theory and practice of democracy, the science and technology of craftsmanship, art, and tragic poetry.

The confidence of Athens found a perfect expression in the Parthenon and the beautiful art and architecture and ceramics of Athens exported all over the Mediterranean. Scholars rightly see a golden age in the approximate fifty years of Athenian political and democratic life. This era covered the interwar period between the Persian Wars and the Greek civil war known as the Peloponnesian War.

The second golden age of Greek civilization was also the outcome of another war between Greeks and Persians. This time the initiative came from northern Greece: Macedonia in the fourth century BCE. This was primarily the work of two kings, father and son, Philip II and Alexander III we know better as Alexander the Great.

When Philip II became a king in 359 BCE, Macedonia was falling apart from internal and external crises and threats. Philip crushed his domestic opponents and, immediately, put Macedonia on war footing. He reorganized his army and made it a first-rate fighting force. He defeated each of the several enemies Macedonia had near its borders: Paeonians, Thessalians, Thracians, Epirots, Scythians, Dardanians, and illyrians.

Philip carried his perpetual war to mainland Greece. In a decisive battle at Chaeronia in Boeotia, Central Greece, in 338 BCE, he defeated the strongest city states, Athens and Thebes and their allies. In the following year, in 337 BCE, Greek leaders in Corinth elected Philip to head a Panhellenic war against Persia. Philip was ready to depart for Persia but he was assassinated in 336 BCE.

Rise of Alexander the Great

Alexander immediately stepped into the shoes of his dead father. Like Philip, Alexander dealt harshly with both domestic and foreign opposition. Thebes made the fatal mistake of declaring war against him. In 335 BCE, Alexander returned to Thebes and wiped it out.

Alexander’s exceptionally brutal treatment of Thebes sent a message to the mainland Greeks that Macedonians ruled the country. Aristotle, who had tutored Alexander, felt safe and opened his Lyceum School in Athens.

Alexander adopted the strategies of his father. He led the powerful army his father had built and invaded Persia. In May 334 BCE, he landed in Asia and won his first victory in the River Granicus. In 333 BCE he cut the Gordian knot in Asia Minor, a symbolic action that he was certain he would conquer Asia.

In short time and after winning a series of spectacular victories against numerically superior Persian and Indian armies (Battle of Gaugamela in Persia, 331 BCE, Battle of Hydaspes in India, 326 BCE) Alexander was the king of Persia, which included Egypt. In fact, Alexander added to the territories of Persia Afghanistan, Pakistan and regions of India. His empire was vast.

Alexander learned from Aristotle to value Hellenic culture, turn its inherent virtues of valor, wisdom, and science and craftsmanship to building a new Hellenic world. His general, Ptolemy, eventually became king of Egypt with capital in Alexandria, the polis Alexander had chosen for his capital. It was in Alexandria that Ptolemy recreated Aristotle’s vision of Hellenic science and civilization, with a supporting university and the largest library the ancient world had ever seen. The second golden age of Greek science had found a base.

The second asset of Alexander came to him from his father. Philip taught his son how to fight with courage and win victories.

Philip and Alexander are equally responsible for the dramatic expansion of Hellenism throughout the world. They accomplished so much so fast that Alexander was about thirty-three years old when he unexpectedly died in Babylon in 323 BCE.

Alexander: an icon of greatness

The accomplishments of Alexander were so unprecedented and outstanding, his military genius so spectacular, that he remains an icon of greatness, outshining by far any other person in history who has the title of being great.

But that legacy of greatness for Alexander has all but eclipsed the role of Philip, his father, in preparing Alexander to climb so high in military and cultural achievements for earning the crown of history and be known as Alexander the Great.

A British scholar by the name of Adrian Goldsworthy has almost closed the gap between father and son. His book, Philip and Alexander: Kings and Conquerors (Basic Books, 2020), is a narrative history of enormous interest. It gives Philip the credit he deserves for training Alexander and preparing a powerful Macedonian state that made Alexander’s Hellenic vision possible. 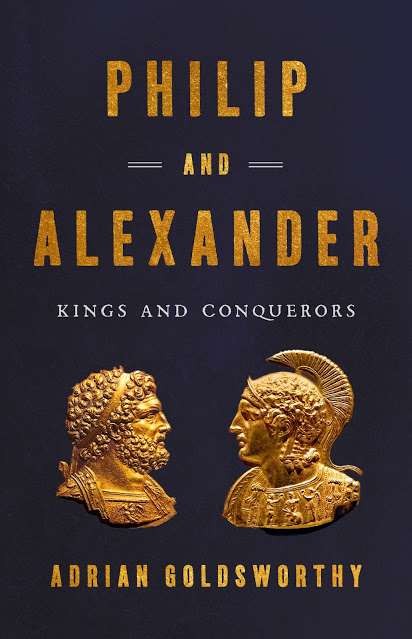 Goldsworthy is an expert on Roman history, though he is right you cannot understand the Romans in the absence of Greeks. This means he read widely and summarized the best of the hundreds of books and articles modern scholars have been devoting on Alexander the Great and, to a much lesser extent, on Philip. His book is timely, well-written, and extremely important. However, the story is comprehensive and spares no detail in explaining these two Greek Macedonian kings and politicians, how they shaped Macedonia, Greece, and the world.

“Alexander achieved immense fame, so much so that books like this one still tell his story more than twenty-three centuries later,” writes Goldsworthy. “Philip made that achievement possible.”