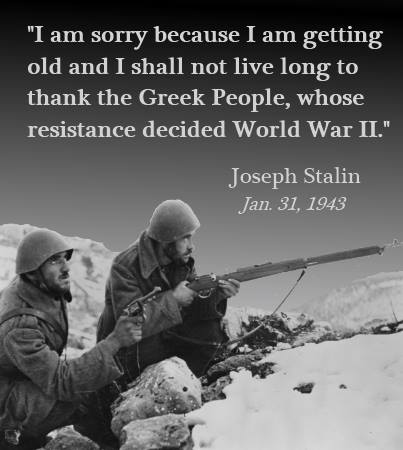 — Few Know How Virtually Alone Greece Was Against the Axis Forces On Oxi Day —
WASHINGTON, DC, November 11, 2014 — While the Oxi Day story has become more well-known through the efforts of our Foundation, very few realize the reason it was one of history’s most courageous acts.

When Greece said “Oxi” (No) to surrender to the Axis Forces in WWII, Greece became one of only two countries in the world opposing Hitler’s Axis Forces. The other country was Great Britain, and they had been sent into retreat across the English Channel. The Axis Forces had crushed all other opposition. The world’s most powerful military, France, fell in just 45 days. Fourteen other countries fell even faster. The Soviet Union had a non-aggression pact with Hitler and America was a neutral nation at the time of Greece’s historic stand.
US President Franklin Roosevelt best explained this incredibly admirable courage of the Greek people when he said:
“On the 28th of October 1940, Greece was given a deadline of three hours to decide on war or peace,
but even if a three day or three week or three year deadline were given, the response would have been the same. The Greeks taught dignity throughout the centuries. When the entire world had lost all hope, the Greek people dared to question the invincibility of the German monster raising against it the proud spirit of freedom.”

Greece’s “Oxi” was an incredible historic accomplishment on its own. But it led to six more historically significant WWII accomplishments of the Greek people. It led to:
The first defeat of the Axis Forces;
Hitler losing more Nazis in the first day of the Battle of Crete than in any other day in the year-and-a-half year war;
Hitler’s elite troops facing the first citizen counterattack on the island of Crete;
Hitler’s troops encountering on Crete the first battle opposition from large numbers of civilian women;
The Greek people’s unsurpassed courageous reaction to the Holocaust; and
Delaying Hitler’s invasion of Russia, causing the Russian and German military leaders to credit Greece with Russia’s victory and Hitler’s ultimate defeat.
To learn more about Greece’s courageous actions in WWII, please visit www.OxiDayFoundation.org