Protection of borders and human rights not incompatible but complementary

(COVENTRY, RI 5/13/22) Rhode Island State Senator Lou Raptakis is leading a group of dozens of Hellenic-American State Legislators from around the country who are calling on Congress to reject a recommendation by the Biden administration to allow the sale of Lockheed Martin F-16 fighter jets to Turkey to upgrade their air force.

Raptakis and his colleagues questioned the timing of the move, with the Greek Prime Minister Kyriakos Mitsotakis coming to Washington, DC and the new U.S. Ambassador to Greece George J. Tsunis taking up his new post. They called the timing an embarrassing misstep, especially in light of the fact that Turkey is refusing to join with the US and NATO countries in sanctioning Russia for Putin’s invasion of Ukraine.

“It’s unconscionable that the Biden administration is requesting the approval of this deal when Turkey is turning its back on supporting our efforts to stop Russian aggression in Ukraine,” said Raptakis. “To reward Turkey now with the sale of new fighter jets would be a horrible mistake.”

In July of 2019, Turkey was expelled from the F-35 fighter jet program after the Erdogan regime accepted delivery of the Russian S-400 missile system. Raptakis and his colleagues argue that Turkey’s behavior has only gotten worse and there is no compelling reason for the United States to reward a nation that is undermining U.S. security interests in the region and threatening NATO allies. “Turkey has been a destabilizing force in the eastern Mediterranean, seeking to intimidate its neighbors and playing the role of chaos agent in the region,” said Raptakis. “The Erdogan regime has violated a United Nations arms embargo in Libya, deployed its troops and Syrian militias in the region and undermined U.S. security interests.”

Last year, the World Justice Project recently ranked Turkey as one of the world’s countries for the rule of law, ranking 117 on a list of 139 countries. Turkey earned worst or second-worst scores in five of the eight categories, including open government and security.

In calling on the Biden administration to reject the F-16 sales, the legislators said such a deal would significantly undermine the long-standing US-Greece Mutual Defense Cooperation Agreement recently renewed by United States Secretary of State Antony Blinken and Greek Foreign Minister Nikos Dendias. They said this agreement represents the best path forward in terms maintaining the US-Greek strategic partnership and containing the territorial ambitions of the Erdogan regime.

Raptakis concluded, “We need to see a sustained commitment by the Turkish government to stop playing the role of chaos agent in the region before providing them with additional tools to continue their aggressive actions.” Individual legislators will also forward letters to their United States Senators and members of Congress which included the following at press time: 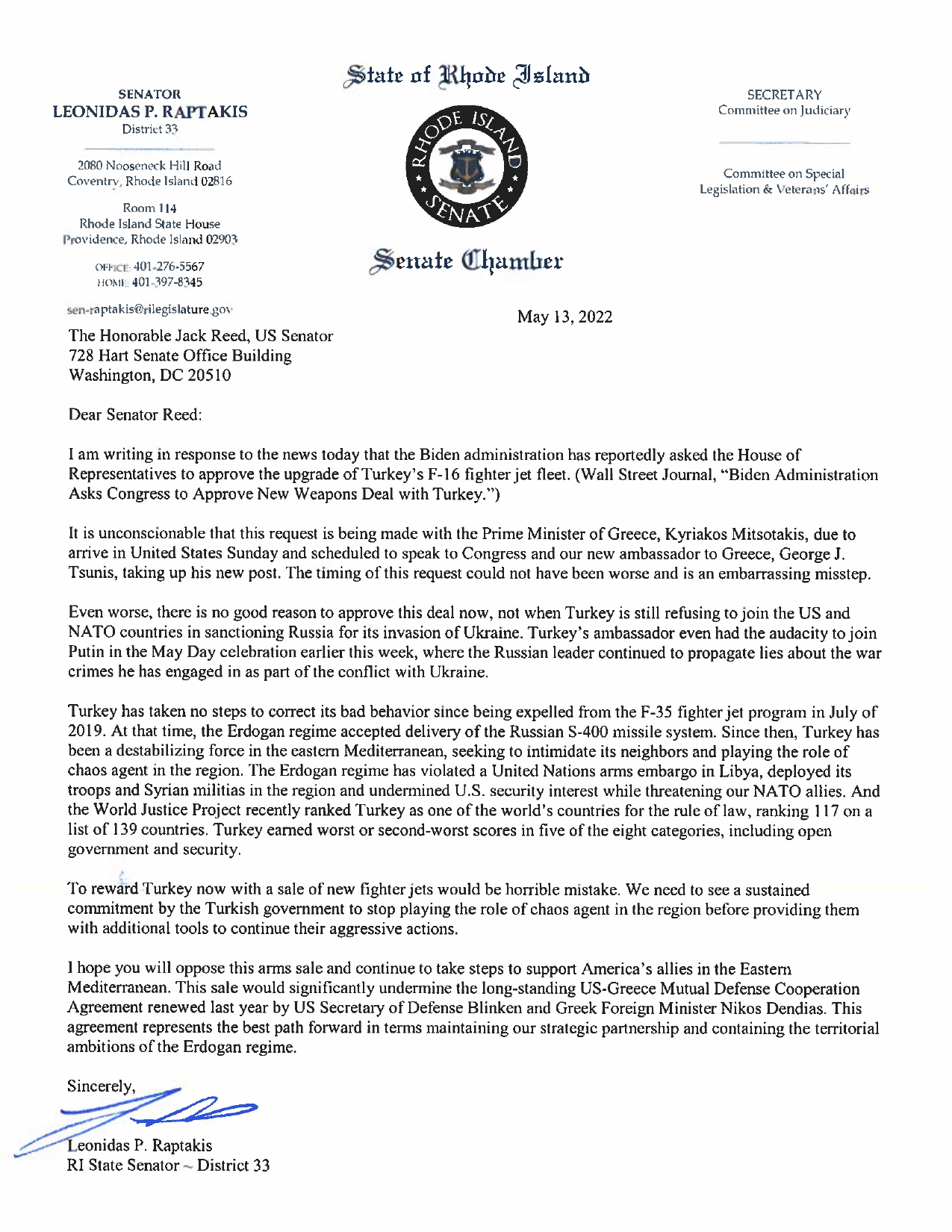 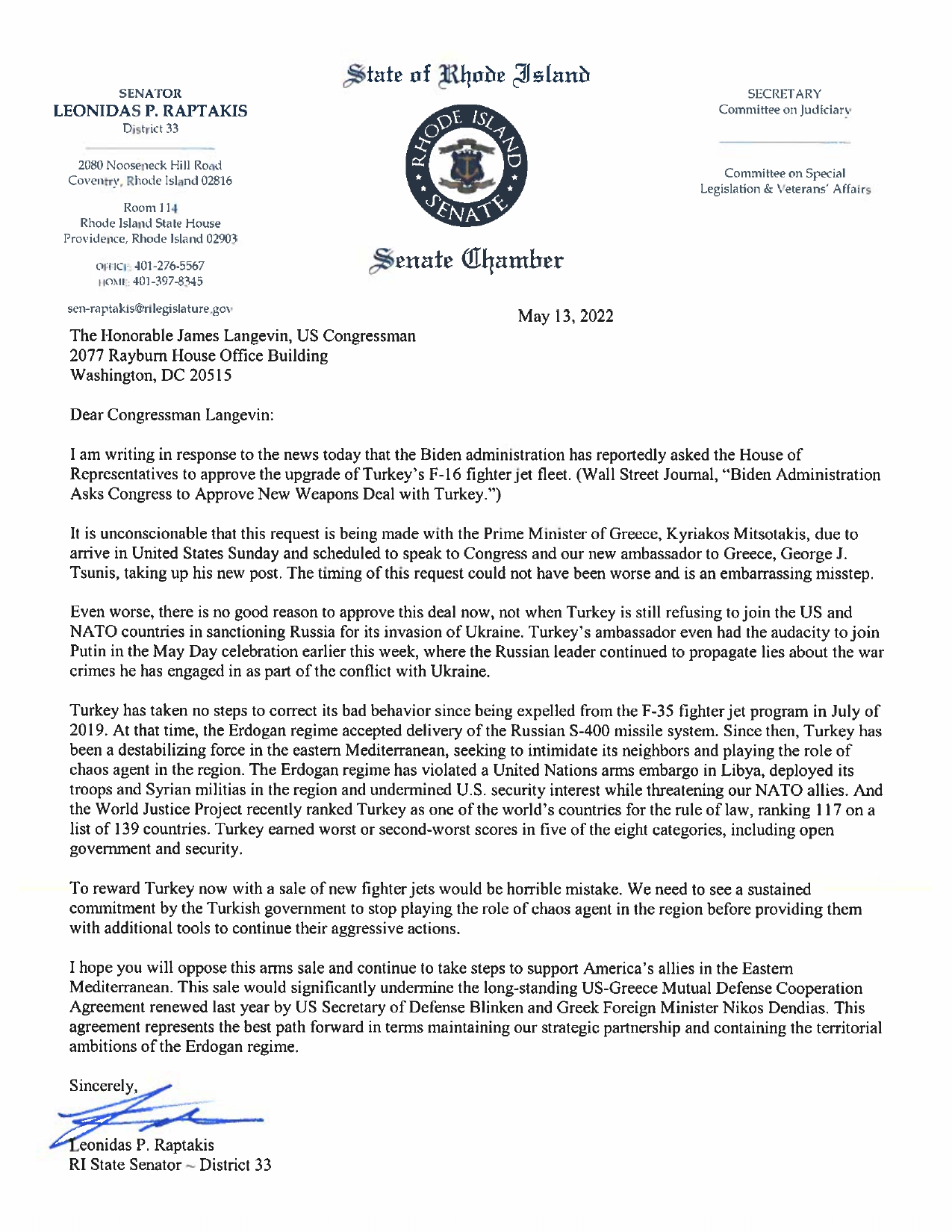 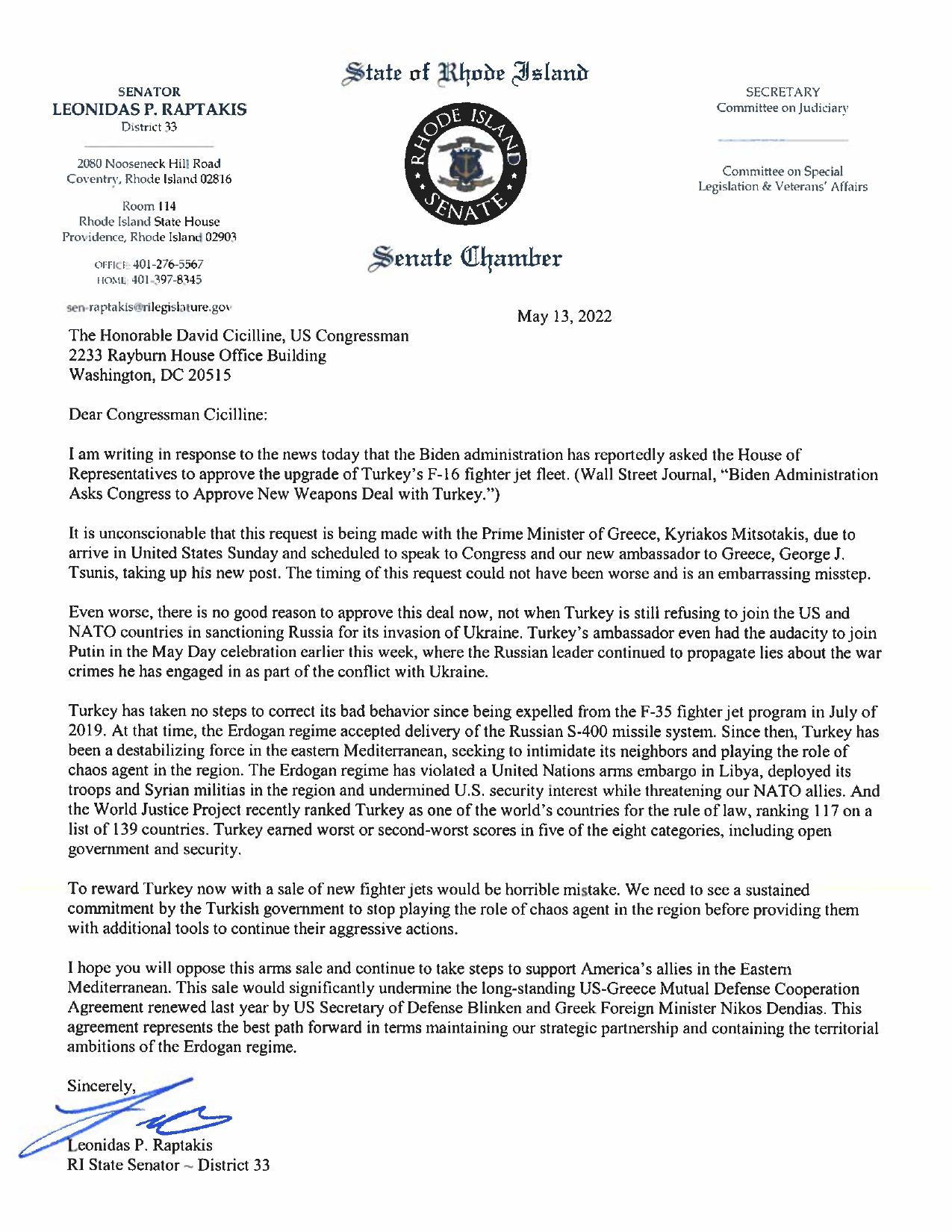 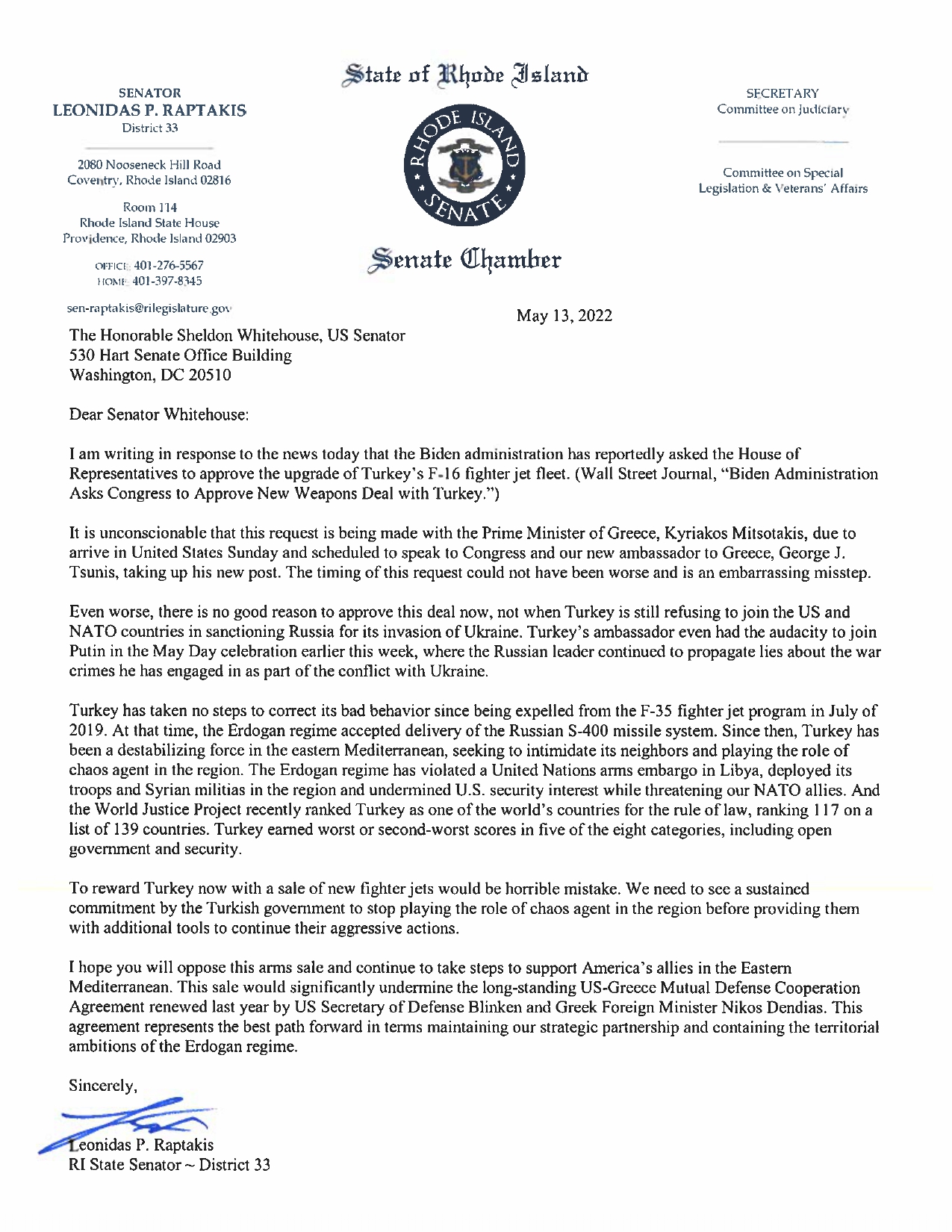 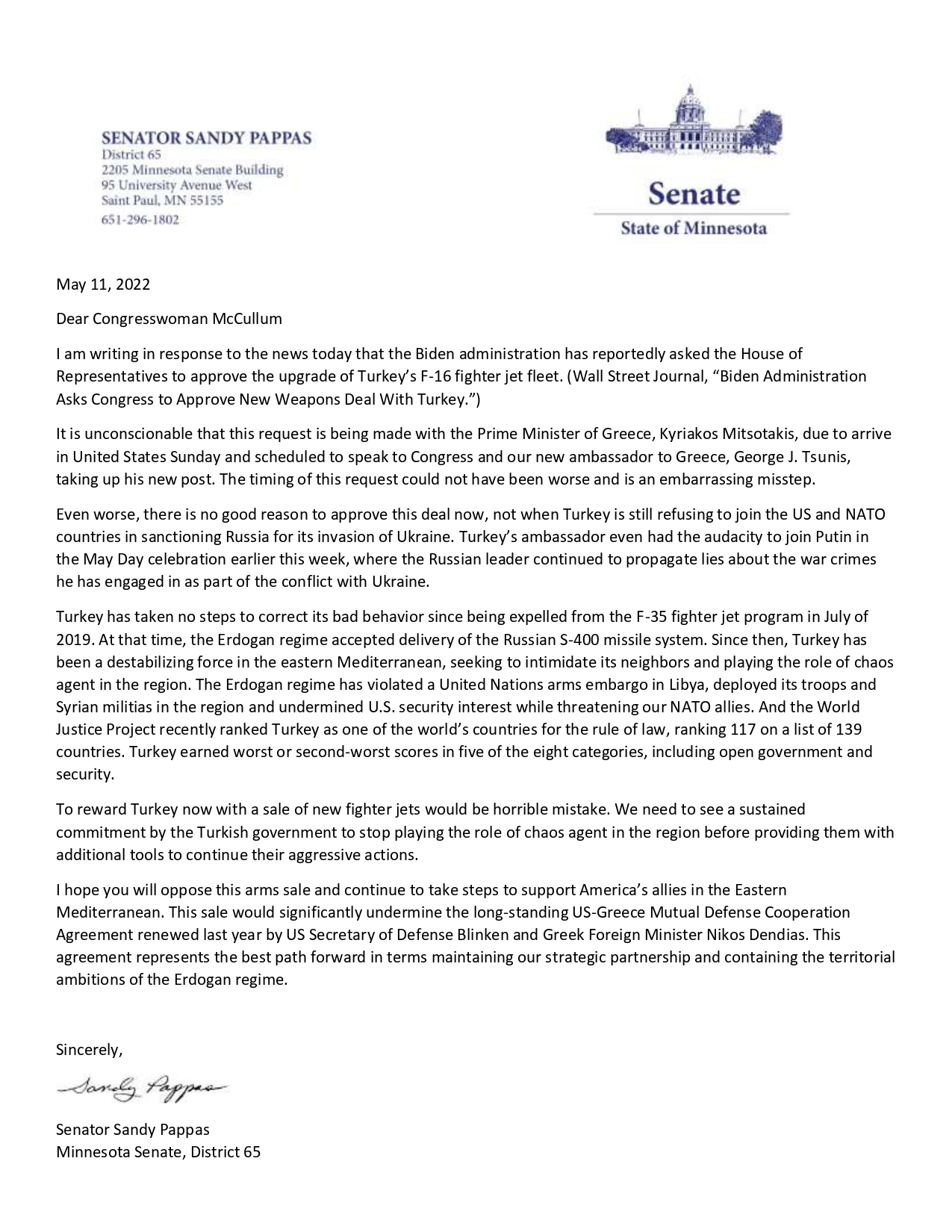 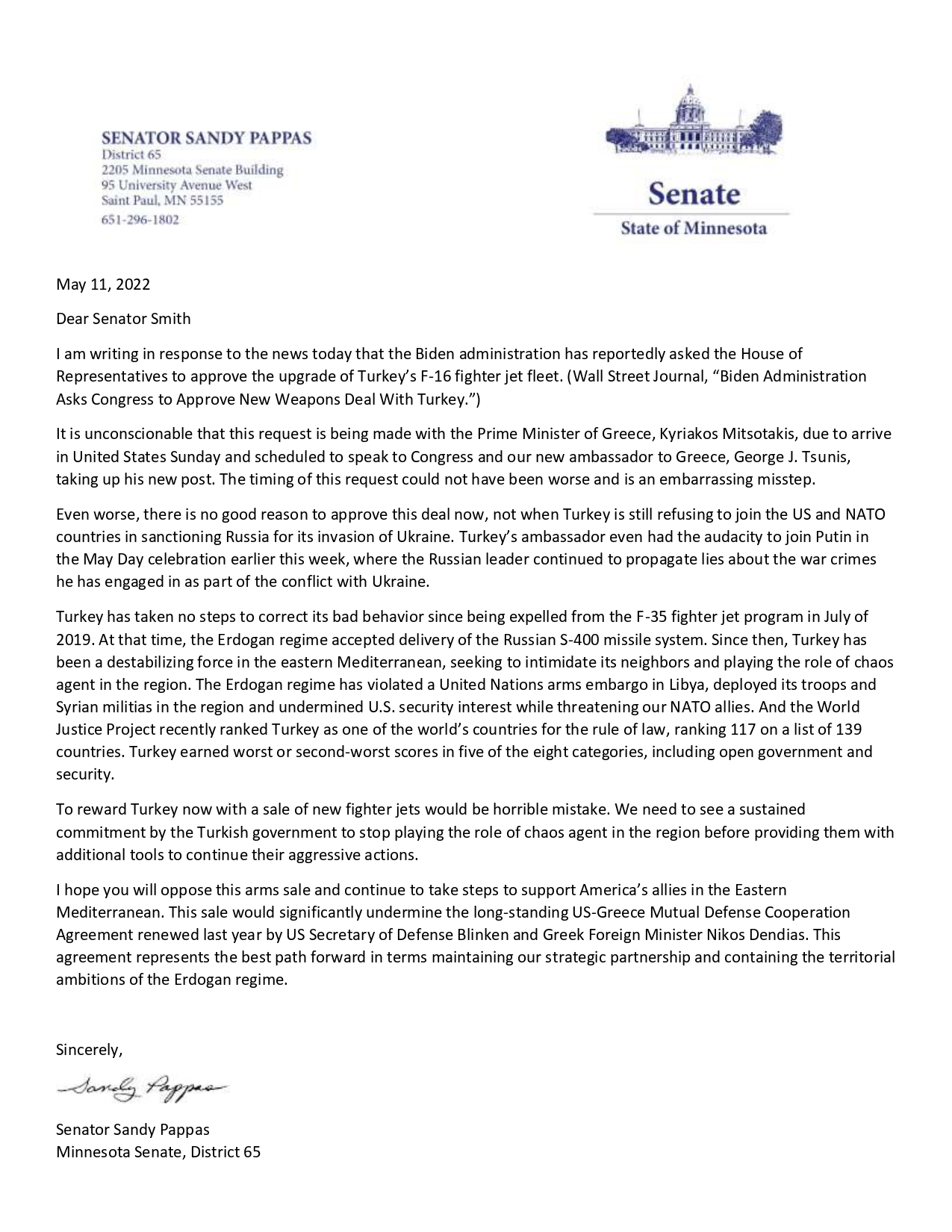 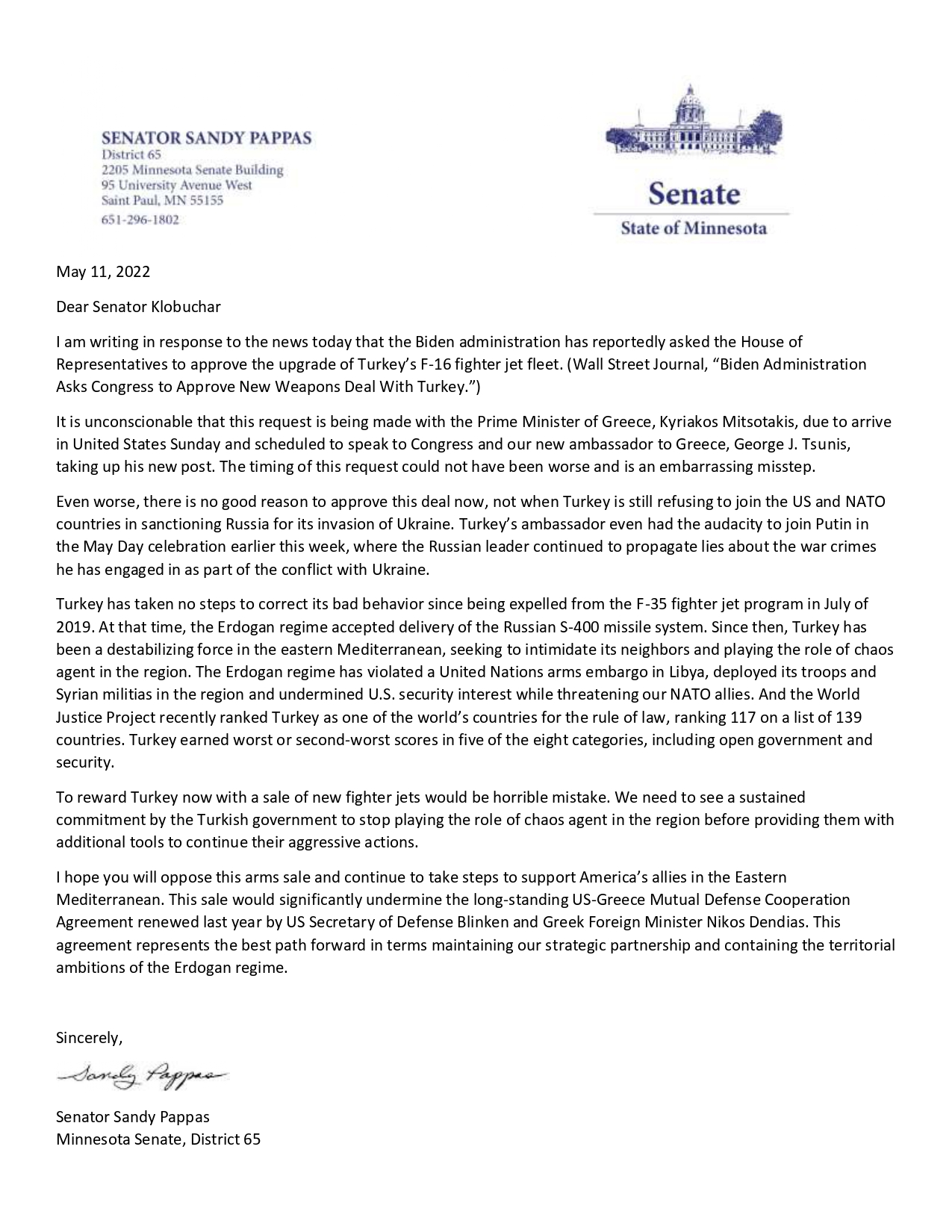