CommunityCultureOn the Road in Greece: Excursion to Olympia By Catherine Tsounis
CulturePeopleFeaturedFood and TravelTravel

On the Road in Greece: Excursion to Olympia By Catherine Tsounis 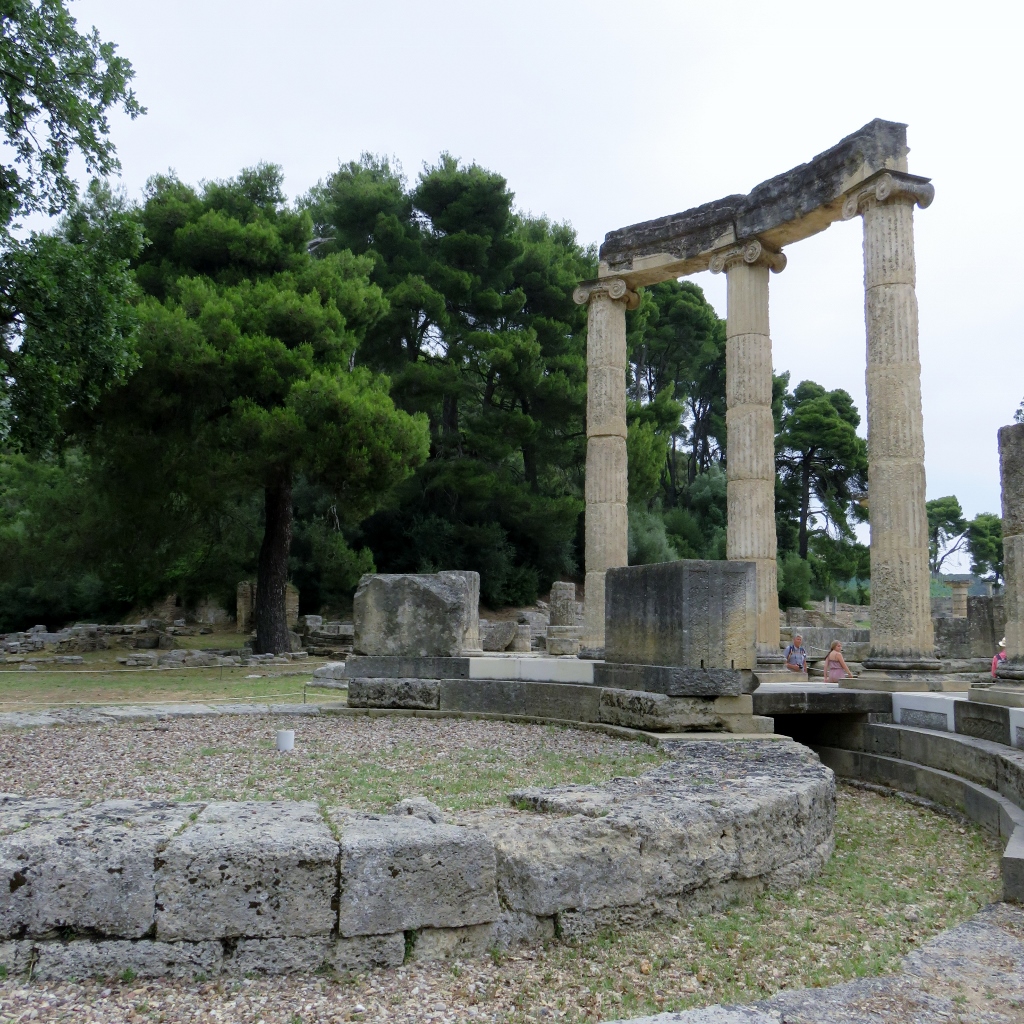 “I do declare that later, even in an age unlike our own, someone will remember who we are.”- Sappho, Greek poetess from Lesvos.

Olympia in all seasons reveals a new perspective to the tourist. I was part of an excursion in June 2016 with Dolphin Hellas. Our guide Antony and bus driver Kosta gave us an informative and safe trip. We passed through the legendary Alpheus river from Nafplion in late evening. Olympia is located near the western coast of the Peloponnese peninsula of southern Greece, 10 miles (16 km) inland from the Ionian Sea, near a point where the Alpheus (Alfie’s) and Cladeus (Kladios) rivers meet.1

We arrived at the Arty Hotel, Olympia in the evening. From my window, I saw olive groves and mountains. An Olympic style pool was available. I was having trouble with the Wi-Fi. Stathis Mantas, the reception computer expert, knew how to put in the correct codes quickly.

The Breakfast buffet was exceptional. The foods were not commercial, but traditional Greek cuisine. The breakfast included: fresh strawberries with Greek yogurt, olives, a variety of breads, loucoumades, homemade marmalades, local Peloponnesian honey, chocolate and honey cakes, Turkish delight, tiropites with whole meal dough, chess pies wrapped as cylinders and spinach pies. The reception area was in a traditional Greek folk style. The hospitality of Anastasia Volosyraki made an impression. Andreas at the reception desk welcomed all tourists in this traditional Greek style hotel.

Feeling great, we left for Olympia. Basically, a tourist must have an imagination seeing the ruins. Earthquakes, wars, plundering and removing building materials to construct Christian churches are some of the reasons for the ruins. Olympia archaeological site is of outstanding cultural significance. It was designated a UNESCO World Heritage site in 1989. The columns were made of local limestone with shells, not marble. The Judas trees and oleanders were blooming. Early and late spring is the best time to enjoy the floral beauty. The Olympic stadium grabbed everyone’s attention.

The posters explained “Its power and influence was felt throughout the Greek world…Zeus, the Father of the Olympian Gods was worshipped. The temple of Zeus had enthroned gold and ivory cult statue by the Greek sculptor Phidias, one of the 7 wonders of antiquity. The ceremony of lighting the modern Olympic games is held here…. The partial restoration work of the Philippeion, finished in 2005, was executed by the German Archaeological Institute. It included some parts brought back to Greece from the Pergamon Museum in Berlin.” This was the ruin that stood out.

I was anxious to see three marvels of the ancient world: Hermes of Praxiteles; Nike of Paionios and Zeus and Ganymedes statues in the Archaeological Museum. Government regulation of the tourist industry was prominent with the sign “Is your guide licensed?” I was convinced these guides made less than McDonald’s employees. They were university graduates, struggling for work in a country without employment opportunities. I gave generous tips, not caring what others gave. This was my way of helping the Greece economy. Giving directly to the struggling, educated middle class.

“Praxiteles, (flourished 370–330 BCE), greatest of the Attic sculptors of the 4th century BCE and one of the most original of Greek artists. By transforming the detached and majestic style of his immediate predecessors into one of gentle grace and sensuous charm, he profoundly influenced the subsequent course of Greek sculpture…. The only known surviving work from Praxiteles’ own hand, the marble statue Hermes Carrying the Infant Dionysus.” This statue was the focus of my attention during my Olympian excursion. Hermes of Praxiteles
One of the masterpieces of ancient Greek art. Hermes, as Pausanias informs us, is depicted carrying the infant Dionysos. It is made from Parian marble.

Nike of Paionios depicts a winged woman. An inscription on the base states that the statue was dedicated by the Messenians and the Naupactians for their victory against the Lacedaemonians (Spartans), in the Archidamian (Peloponnesian) war probably in 421 B.C. It is the work of the sculptor Paionios of Mende in Chalkidiki…cut from Parian marble,. Giving the impression of Nike triumphantly descending from Olympus. Zeus and Ganymedes terracotta statuette depicting Zeus carrying off young Ganymedes,..dated to 480-470 B.C.”3

As we were leaving Ancient Olympia Archaeological Park, we stopped at the Tourist Club. It is set on a green hill. Everyone enjoyed the restaurant. The outdoor grounds had a folk cart with geraniums. Oleanders and Judas tree were part of the landscape. Comfortable chairs for lounging were in the patio. I had a photo with George, our bus driver and Antony, our tour guide.

Our final stop was at Padelina shopping center in Olympia. A Greek supermarket with only Greek made products, Padelina shopping Center was an experience. Cash and carry without shipping to her/his home is the best way to shop. Panayiotis, an administrator, had a wine tasting demonstration with wine and honey. We were offered Achaia Claus wine from Patra.

When I reached New York, I went to a local liquor store and bought this rich wine as souvenirs for my doctors, who need it with Obamacare. Loukoumi and honey sesame candies were displayed in bags. Greek soaps made from olive oil, ceramics, oil paintings, different varieties of olive oil and honey were displayed. Roses were part of the art décor. This Olympian market completed our excursion to Olympia. All these experiences and a four-star hotel in a one day excursion. This is the most economical way to go. 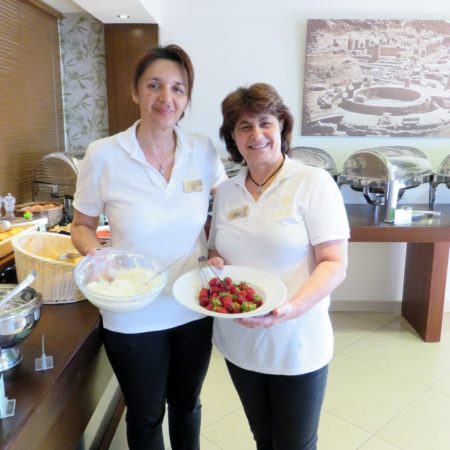 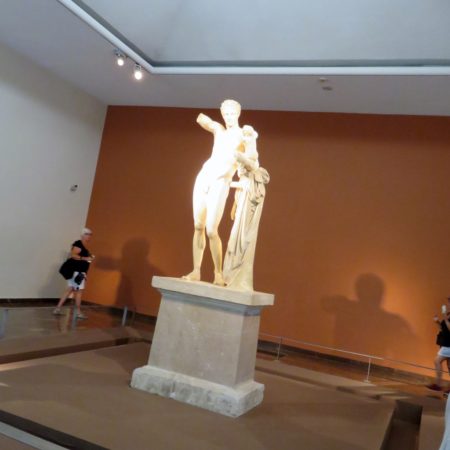 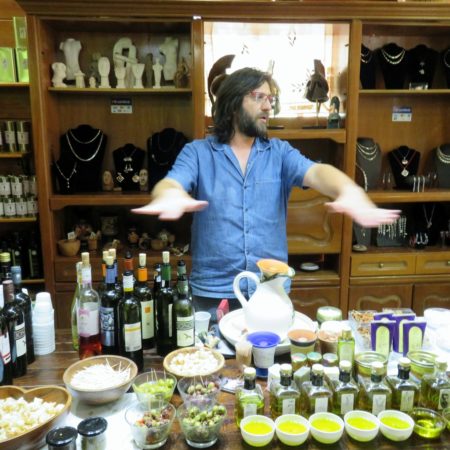 Previous article
Great honor to Nick Larigakis by the Mayor of Perth hosting a reception to welcome him to the city
Next article
Πασχαλινή παιδική διανομή του Hellenic Relief στη μνήμη Πολυξένης Μαστροπέρρου.