On the Road in Greece: Greek Colonies Legacy in Delphi 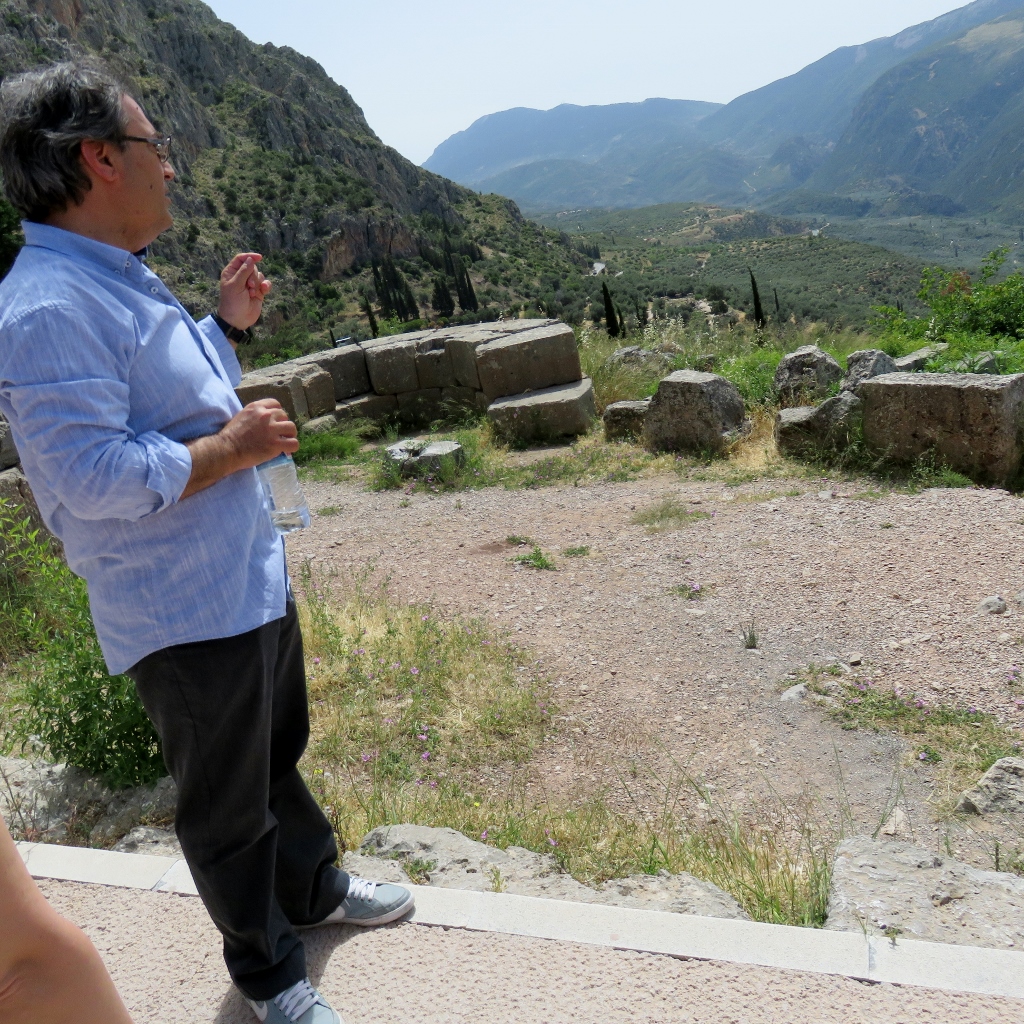 “The rulers of Syracuse built a treasury house in Delphi to commemorate their victory,” said guide Antony Fragopoulos, of our Classic Greece Dolphin Hellas/G.O. Tours excursion. In enthusiastic Italian and English, Antony brought alive the glory of the Greek Colony of Syracuse. Being with Italians from Florence made my day. Their warmth, friendliness will always remain with me.

The Siege of Syracuse (414-413) was one of the most important campaigns during the Peloponnesian War. A well-equipped Athenian army blundered into disaster, was annihilated, and left its country almost defenseless against Spartan attacks. The booty was immense; the Syracusans were able to build a splendid treasury in Delphi to store one tenth of the proceeds of this war. Because Thucydides’ account of the siege of Syracuse is a literary masterpiece, the war has always remained part of the collective memory of western civilization. Syracuse, which was fortified with formidable walls in the years after the siege, was believed to be impossible to capture, and when the Roman general Marcellus in 212 finally took the city, treason played a role. It is said that during the Second World War, the American general Patton wanted to invade Sicily and capture Syracuse, only because the Athenians had been unsuccessful. 1

From the entrance of the site, continuing up the slope almost to the temple itself, are a large number of votive statues, and numerous so-called treasuries. These were built by many of the Greek city states to commemorate victories and to thank the oracle for her advice which was thought to have contributed to those victories. These buildings held the rich offerings made to Apollo; these were frequently a “tithe” or tenth of the spoils of a battle.2 Poppies were growing among the rocks.

As we discovered the Italian heritage of our excursion members, I discovered my own heritage through the prophetess from Erythrae peninsula in Asia Minor opposite the island of Chios. I was told by cousins that our families had summer homes in Erythrae. Many said special women were from there. They were referring to the ancient prophetesses, the Sybils. We saw the “Rock of the Sybil with the Temple of Apollo to the right…This rock marks the place where Delphi’s first prophetess pronounced her oracles.” 3 As Pausanias says at Phocis “there is a rock which extrudes from the ground. The Delphians say that after she stood above this rock, a woman named Herophile chanted her oracles, a woman who was known as a “Sibyl“.4 She was from Erythrae, opposite the island of Chios. With the advent of Christianity, iconography of the Erythraean Sibyl sometimes appears as one who prophesied the Redemption. Examples were in mediaeval paintings in Salisbury cathedral. 5 Unfortunately, because Greece lost Asia Minor about a hundred years ago, the history of these colonies are known mostly among scholars and interested persons. Our guide Antony Fragopoulos showed us the heritage of Magna Graecia at Delphi.

Photo 1 – “The rulers of Syracuse built a treasury house in Delphi to commemorate their victory,” said guide Antony Fragopoulos