On the Road in Greece: Mycenae with Dolphin Hellas Tour By Catherine Tsounis 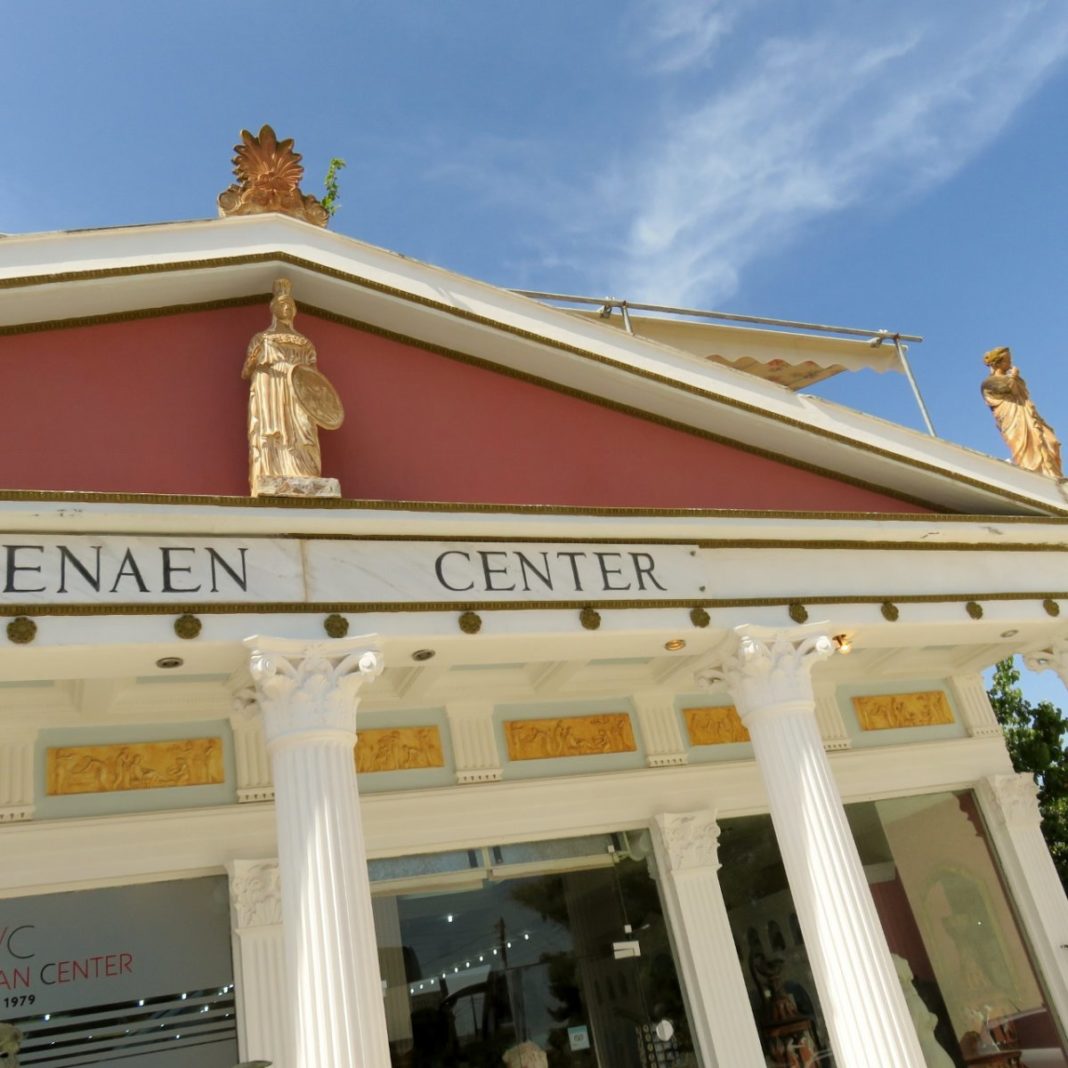 “All things in Greece- mountains, rivers, seas, valleys- are ‘humanized’; they speak to humans in a language which is almost human. They do not crush or torment him but become his friends and fellow workers.” Nikos Kazantzakis.1

Mycenae came alive in June 2016 through guide Antony Fragopoulos of a Classical Greece Tour sponsored by Dolphin Hellas, Athens. “I am your guide Antony,” in a vibrant, booming voice at our Nafplio hotel. “We are combining your group of seven persons with Italian tourists from Florence.” A fun filled excursion began with tourists who were warm and friendly in a bilingual Italian/English environment. The Florence group was highly educated with renowned scholars and scientists. Antony should have been an actor. Our Italian group showed their intense enthusiasm for his narration of the “Glory of Mycenae”. Being with interested persons who showed an eagerness to understand Greece, brought back memories of my Arba Sicula Society tours of Sicily with Dr. Gaetano Cipolla and Dr. Forence Russo.

2016 is “the Year to discover the Peloponnese” according to the Greece Tourist Office. Our bus driver George drove through the mountains with an exceptional professionalism. We were lucky to have him with us. The most economical way to travel is in group excursions. Travelling alone is an experience. A person “must look at the broader picture” said my friend Bibi Deokaran. This is my second year booking excursions with Dolphin Hellas. They ty their best in helping the tourist enjoy the beauty of Greece.

We passed through olive groves on the way to Argolida, “the land of the Mycenaean civilization. The archaeological site of Tiryns was seen from the bus. The extensive, dark brick walls are a Mycenaean trademark. The site was fenced, surrounded by mountains and olive groves. We stopped for lunch at Modern Mycenae. This is a tourist town with restaurants, small hotels, bed and breakfast accommodations and souvenir shops.

“King Menelaos” restaurant was our lunch stop. The background was breathtaking with the mountains of Argolida. I loved the cactus plants and fir trees around the restaurant. The interior had an oversized wall plague of the lions from the “Lion’s Gate” with the title “King Menelaos”. Oleanders and Judas trees lines the streets of a quiet modern Mycenae. Several houses were incomplete. Many Greeks have stopped construction of the first floors of new homes, because of the economic depression. Restaurants had classical Greek names such as Homer and Orestis. A small family style hotel called the “Oasis” had signs “Rent rooms with bath”. Modern Mycenae is immaculate with well-kept homes. No garbage containers overflowing as the Acropolis area of Athens. No graffiti. The mountain scenery makes a visit to modern Mycenae memorable.

The ancient Greeks were great in real estate. They picked the best locations for their cities. Mycenae’s setting is almost as impressive as the Parthenon. It was built on a plateau between two mountains. The cyclopean walls are first noticeable as you approach the citadel.

An onsite exhibit explained “The Mycenaean rulers had the seat of their power and activity in a luxurious place built on a hill, surrounded by imposing fortifications during 14thand 13th B.C. Mycenae…The fortification wall (Cyclopean Wall) follows the natural contour of the ground. It is founded directly on the outcropping bedrock. It is in the shape of a triangle… boulders of hard limestone bedrock were used.”

Grave Circle B, which is to the right of the citadel, was excavated in the early 1950’s. It is dated 1650 B.C. The 25 graves in the circle had object of bronze, rock, crystal, ivory and gold. It produced some of the important finds of Mycenae.

The Lion’s Gate is made of four massive pieces of stone. It supports a triangular stone carved relief of two headless lionesses. They rest their paws on a pillar on top of which is an abacus. It weighs between 12 and 20 tons.

The beehive tombs of Clytemnestra and Aegisthus that is dated 1300 B.C. A line of merchants’ houses had Mycenaean Linear B scripts. One home produced perfumed oils for export. Grave Circle A contains the royal tombs that were the site of Schliemann’s excavations. The circle contains two rings of wall. Six graves with 19 bodies were of the ruling family. The extraordinary finds are in the National Archaeology Museum of Athens.

A path up the hill from Grave Circle A leads to the royal palace overlooking the fertile plains. The House of Columns is at the far end of the citadel. Only the bases remain. At the back wall of the citadel, is a small gate or “Sally Gate”. A counter attack could be launched against an enemy. In a nearby corner is Mycenae’s surprising attraction, “the secret cistern, and 100 steps leading down under the wall. The engineering project connects to an outside spring that provided a secure water supply.

The Treasury of Atreus is a tholos (beehive tomb), dating to 1300 B.C. It is the finest tholos tomb in existence. For over 1,000 years, this was the largest domed structure on earth. The walls are snug fitting blocks of breccia joined without mortar.

The Mycenae on site museum summarizes the finds with actual and reproduced pieces. Some examples are frescoes, coins, pottery, small statues, jewelry and weapons. The second floor basement has reproductions of Schliemann’s gold objects and jewelry.2

Our Mycenaean tour ended at the elegant Mycenaean Center Ceramic Workshop. Greek statues with acolumn faced adorned the entrance. The hosts were gracious and hospitable with wine tasting. A pottery demonstration showed us how they are created. A rich inventory of statues, vases, plates and jewelry were available. Helen D. Maragos-Tsakonas is the jewelry designer who operates this family owned business. Her warmth and beautiful smile invites people to shop.

Her brochure is in English and Chinese “in the Mycenaean Center, you will find unique and beautiful presents for yourselves and loved ones,” she said “Presents are up to date and give you a feeling of pleasure. All this in a friendly and warm atmosphere with an experience staff that not only knows how to make you feel comfortable, but to offer you good prices as well. We are looking forward to seeing you”. On this positive note, my Mycenaean adventure ended. 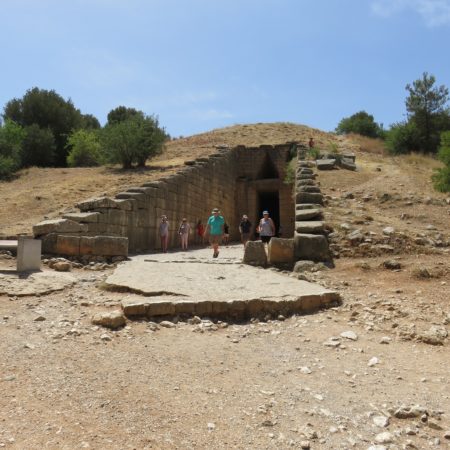