GreeceOn the Road in Greece: Seeing the Aktiou Tunnel and Pindos Mountains...
GreeceFood and TravelTravel

On the Road in Greece: Seeing the Aktiou Tunnel and Pindos Mountains of Epirus 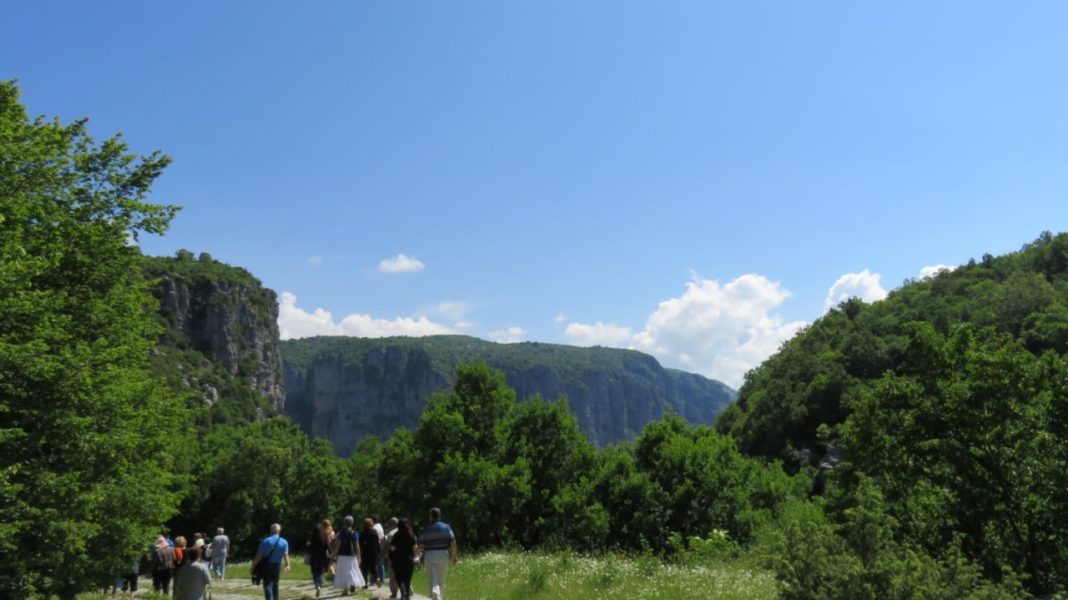 “We will pass through the undersea tunnel of Aktiou,” explained Kostoula Kapogiannis, our tour guide on our three-day excursion was of Lefkada, Epirus and Central Greece with Kapogiannis Tours of Tripoli for 160 euros. “This is the road through Preveza to Metsovo. We will pass through scenic mountain mini-cities full of atmosphere and traditional character. It is famous for its local products and the “Land of the National Benefactors.”

The undersea tunnel of Preveza open our eyes to the modern Greece that links geographical areas. “The undersea tunnel of Preveza – Aktio connects the strait that separates mainland Greece from Epirus in the Ambracian Gulf. The construction of the project begun in the mid-1990s and was completed in 2002. Its cost was EUR 58,904,232.13 and is considered one of the most expensive public works in Greece, after the Egnatia Odos, Attiki Odos and the suspending bridge of Rio. The distance of the port of Aktio from the old ferry boat port of Preveza is 725 meters while at the narrowest point, the Cape Akritas (where the lighthouse and canon emplacement of 1897 are standing) up to the new breakwater of Preveza is only 600 meters. This strait from ancient times up to 2002 was connected only by ferry boat with frequent problems due to rough seas, lack of night routs and long waiting hours during summer. All these now belong to the past.”1

On the road to Preveza, we saw modern two-story homes in the traditional architecture of Epirus, forested with oak, fir, beech, and pine. Graffiti was absent. We passed a truck with oversize watermelons, honeydews and potatoes. The area is composed of cultivated farmland. I now understand why Albania wants to acquire Epirus. Elpida Litos, a senior citizen from Greek Northern Epirus (in Albania) said “The Pindus mountains are the site of Greek blood.” She was referring to WWII and the Greek civil war.

We passed through the Pindus Mountains for two days, seeing Ioannina, Metzovo and the Zagorian villages, including the Vikos Gorge. The range encompasses two national parks, the second largest gorge in Europe and some of the  highest mountain peaks in the country. “The Pindus mountain range is located in northern Greece and southern Albania. It is roughly 160 km long, with a maximum elevation of 2,637 m (Mount Smolikas). Because it runs along the border of Thessaly and Epirus, the Pindus range is often called the “spine of Greece”. The mountain range stretches from near the Greek-Albanian borders in Northern Epirus, entering the Epirus region and Macedonia region in northern Greece down to the north of the Peloponnese. Geologically it constitutes an extension of the Dinaric Alps, which dominate the western region of the Balkan Peninsula. This vast complex of mountains, peaks, plateaus, valleys and gorges traverses the Greek mainland from the Northwest to the Southeast. Its length reaches almost 230 kilometers and its largest width is 70 kilometers.”2

We saw the Vikos Gorge at the Zagorian village of Monodendri. “The Vikos gorge is a 20km long gorge between the villages of Monodendri and Vikos, and is in the Guinness book of records as the deepest gorge in the world (calculated from width: depth ratio). The average depth of the gorge is 700 meters, but its highest point is 1,600 meters, the width varies from 450 to just a few meters. The Vikos Gorge makes up the majority of the Vikos-Aoos National Park and has the Voidomatis river running through it, which is also the cleanest river in Europe. The gorge is very important to scientists as it has some unique eco-systems and endangered wildlife and plants. The gorge is popular during the summer months for hiking, the full distance of the gorge doesn’t have to be walked, you can enter and leave the gorge at different points along the way.”3

One group member said, “we almost went into Albania.” I was told that Greeks do not like to travel to Albania. Seeing these mountains gave me an understanding into the heroism of the villagers who fought Italy, Germany and suffered the worse with the guerillas in the Greek civil war.

The Hellenic News of America, Hellenic American National Council, Prometheus Greek Teachers Association, The Heritage Museum of Epirus and Hellenic Paideia Association of America will sponsor a Greek Heritage Education Luncheon honoring Catherine Tsounis, Journalist/Writer/Educator of the Greek Language and Culture. The event will be held on Sunday, September 24th, 2017, 3:30 p.m. at the Heritage Museum of Epirus, 2514 Broadway, 3rd floor, Astoria, NY. The Luncheon is free, complements of the sponsoring Organizations. Registration in the Prometheus Greek Teachers Pension Plan will take place. All are invited to visit the Heritage Museum of Epirus. Please RSVP Prometheus Greek Teachers Association President Demosthenes Triantafillou at 551-574-2781 or email [email protected] and John Siolas 718 631-7237 or [email protected].