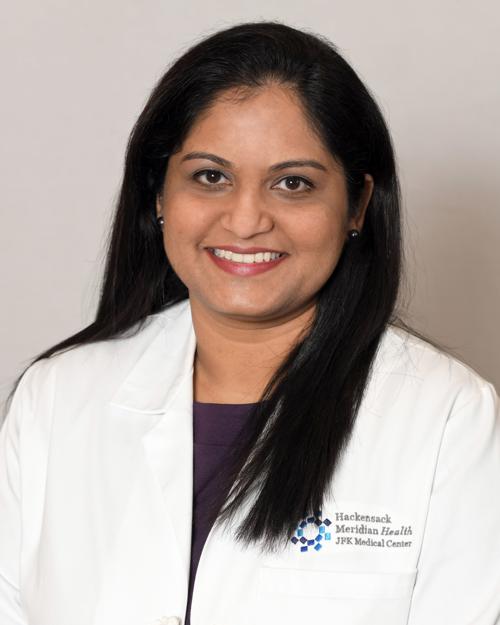 By Leslie Krowchenko, Special to the Hellenic News of America

CDC statistics indicate more than 3.6 million babies were born in the United States in 2021.

Shwetha Shrivatsa, M.D. was no doubt involved in some of those deliveries.

Shrivatsa, board certified in Obstetrics and Gynecology, is a member of the OB/GYN team at Old Bridge and Raritan Bay medical centers, divisions of Hackensack Meridian Health. Her specialties assist women at all stages of their lives, from high-risk pregnancies to menopause.

“My love for both obstetrics and gynecology have evolved over the years,” she said. “The strong bond between mother and child starts even before conception and the difference a gynecologist makes in a woman’s reproductive life is significant.”

A native of India, Shrivatsa was raised in a home surrounded by strong, compassionate, smart, positive women. She learned very early in life that a woman’s health is the key to the family’s welfare, an observation which motivated her when choosing a specialty.

Shrivatsa graduated in 2005 from Mysore Medical College & Research Institute. Members of her extended family, many with the honorific M.D. after their names, encouraged her to follow their journey and immigrate to the United States to complete her education. Her uncle, an orthopedic surgeon, and aunt, a pediatrician, served as role models for her decision.

“They appreciated the excellence of the American health system,” she said. “They noted the move would help me advance professionally.”

Although her mentors live in Florida, Shrivatsa chose a region with four distinct seasons. She settled in Philadelphia, finishing her residency at Temple University Hospital in 2013.

While OB (pre-conception, pregnancy, childbirth and post-delivery) and GYN (all women’s health issues) may appear divergent, they have a singular focus – the medical and surgical care of a woman’s reproductive system. From a baby girl’s first cry, Shrivatsa is involved in all facets of her health, serving as a primary physician and consultant to other doctors.

Her youngest patients are between 13-15, the age when the American College of Obstetricians and Gynecologists recommends girls begin to see a gynecologist. The first appointment, typically involving a regular health exam and discussion about development, offers an opportunity for teens to develop a relationship with their doctor, making it comfortable to share personal information in the future.

The tween-teen years are also the time for the Human Papillomavirus (HPV) vaccine. HPV, the most common sexually transmitted disease (STD) in the United States, can cause genital warts and changes in the cells that may lead to cancer, including cervical cancer. The vaccine, first recommended in 2006, protects against infection, thus preventing warts and cervical cancer.

“The vaccine can be given starting at age nine through age 26, but the ideal time is between nine-12,” said Shrivatsa. “The best time is before the girl may become sexually active.”

Detecting cervical cancer, or alterations to cells suggesting cancer may develop in the future, provides a greater chance of a cure. Precancerous changes and early stages of the disease often lack symptoms; abnormal bleeding between periods, spotting or watery discharge could denote the cancer cells have spread.

Pap smears test for cervical cancer and are recommended for women beginning at 21. The frequency is determined by one’s age and other factors, such as detecting precancerous cells, a weakened immune system or history of smoking.

“Starting cervical cancer screening at that age and discussing individual risks with the gynecologist is essential to prevent HPV infection and cervical cancer,” said Shrivatsa.

Another aspect of her practice is performing laparoscopic surgery, For patients with abnormal Pap test results, excess bleeding, pain or to diagnose the cause of infertility or repeated miscarriages, Shrivatsa completes a hysteroscopy, examining the inside of the cervix and uterus.

Shrivatsa provides her patients with a level of reassurance beyond her medical skills. Middlesex County, New Jersey has the highest concentration of Indian Americans in the United States and for those whose first language is not English, interpreting medical terminology can be as difficult as implementing it. Patients whose blood pressure readings are higher in her office than on the drive there are put at ease by her ability to speak Hindi and English.

“We see a number of patients and certain ones look for me,” she said. “Some of them are bi-lingual, but knowing I speak their language makes them feel comfortable.”

That comfort extends to being a woman and understanding their shared native background.

“I can relate to them, because we have a common culture,” she said. “Our lives have had similar aspects and I can appreciate that now.”

Shrivatsa’s advice to women to take the best care of themselves is two-fold – see the doctor regularly and make small changes in one’s health. Paying attention and responding to symptoms (rather than the “oh, it’s nothing” alternative) is wiser than ignoring them.

“The choices women make empower them to explore their full potential in all aspects of life and contribute productively to society,” said Shrivatsa. “What more can be satisfying than empowering a girl?”

Previous articlePM Mitsotakis: The bet for our second tenure is better jobs and better wages
Next articleActor and singer Nikos Xanthopoulos dies