The concept of “God and Country” throughout Greek history 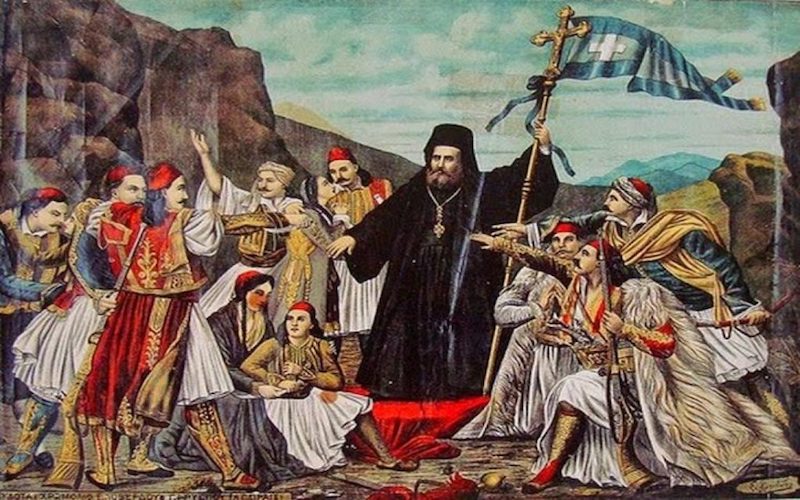 This year Hellenism celebrates the 200th Anniversary of the Greek Revolution that led to the creation of an independent Greek state after almost four hundred years of Turkish occupation. There are some people who downplay the role of the Church during the Revolution and even a smaller minority who claim that this symbiosis of God and Country (Πίστις και Πατρίς) has not been a permanent characteristic of the Greek history in its long trajectory throughout the ages. This last statement poses a serious question that begs an answer.

Let us then take a closer look at Greek history starting with Homer. Before they left for Troy the Greeks that met at Aulis were waiting for propitious winds to open their sails for their long trip. For this to happen, however, they had to offer a sacrifice to Artemis to give them the proper winds for their journey. And the seer of the army, Calchas, asked for the sacrifice of their chief’s daughter, Iphigeneia, to appease Artemis and allow for the safe sail of the thousand ships. Here we have the first example of the strong connection of God and Country i.e. of Θρησκεία και Πατρίδα. We know the rest of the story, along with the many supplications of the Greeks to get the support of their favorite Gods throughout this ten-year war.

This long-established connection continued throughout ancient Greek history in many variations. When, for example, a city would decide to establish a colony, it would first turn to the divine for guidance. One of the most famous divine centers was that of the Oracle at Delphi. So any city that would decide to establish a colony had to consult the Oracle as to the right time and location that should establish the colony. This was a pattern followed by dozens of cities that created a plethora of colonies mostly in Southern Italy and Sicily but also in France and Spain and other parts of the Mediterranean from the 8th to the 6th century BC. Before they would leave their city the colonists would take with them an effigy of their Patron God and the light from his temple. One such colony established in 667 BC was the colony of Byzantion, from its founder Byzas from Megara. Later on, that place would become the center of the Eastern part of the Roman Empire, better known as the Byzantine Empire, and on the small city of Byzantium was built later on our well-known Constantinople the capital of that empire for over a thousand years.

Coming to the classical period we witness another strong manifestation of Πατρίς and Θρησκεία. First and foremost we see it in the military training of the citizens and the participation of the priests in the battles and campaigns. At the end of his boot camp training, every Athenian hoplite would have to take his oath. And while the oath would start with the famous statement “I shall not dishonor these sacred weapons,” its final line would invoke the Gods to witness his oath and keep it, stating: “Let my witnesses be Aglauros, Ares, Zeus, Thallo, Auxo (and) Hegemone.” And when the hour of battle would come, the army would turn to the assistance of the seers to give them guidance to win the battle. We see that clearly at the battle of Platea (479 BC) when the entire army of the allied Greek states was waiting for the “green light” from their seer to start their final and most crucial battle against the Persians.

This strong bond of “Θρησκεία/Πατρίς” continues from the ancient to the Roman and then to the Byzantine period. For example, in his decisive battle against Maxentius Constantine the Great, then Co-Emperor of the Empire saw the famous sign on the Cross, i.e. «Εν Τούτω Νίκα», “In Hoc Vinces”, which became the focal point of his campaign against Maxentius (312 AD) and changed the course of history. From now on the new religion will become the main pillar of support of the new empire. The role of the ancient seers was now replaced by the priests and hierarchs of the new religion. This new symbiosis is very clear throughout Byzantine history and even after the Fall of Constantinople, in a different form. Thus throughout the many wars of the empire, the Byzantine army would go to battle with its holy “lavara” first. An excellent example of this faith is clearly seen in the campaigns of Emperor Heraclius (622,627,628 AD) against the Persians to retake captured territory and bring back to Constantinople the Holy Cross. And we witness that again during the siege of Constantinople by the Avars (626) and its defense by the icon of Theotokos taken around the city ramparts by Patriarch Sergius. And when the siege of the City ended, a huge crowd of soldiers, laymen and clergy went to the Church of Agia Sophia to offer their profound thanks to the Theotokos and ascribe to her the great victory. And thus we have the birth of the famous Akathist Hymn, known to all from its opening line “Τη Υπερμάχω Στρατηγώ τα νικητήρια.”

The intertwining of Πατρίς/Θρησκεία became even stronger during the long period of the Turkish occupation. During this long dark period, the Church played a pivotal role in keeping the idea of πατρίς, language and culture alive. It supported the “Secret Schools” and was always keeping alive the idea of “…πάλι με χρόνους με καιρούς, πάλι δικά μας θάναι.” Many times this approach was dangerous to our church and clergy. Several clergymen and hierarchs paid with their own lives throughout the long occupation for being vociferous with their approach towards our Church and history. Perhaps the most outstanding example is that of Patriarch Gregory E’, who consecrated the Revolution with his own blood when the Turks hanged him at the main gate of the Patriarchate. This ultimate sacrifice of the leader of our Church supported the rebelling nation and strengthened the resolve of the Greek people and clergy to fight for their freedom, as it was manifested at Agia Lavra by Bishop of Patras Germanos and other hierarchs and leaders of the Revolution on March 25, 1821. When after the Revolution the question of “πατρίς και θρησκεία” came up, Kolokotronis the leader of the Revolution in his famous speech at Pnyka (10/8/1838) said: When we took our oath to liberate our country, we first said “υπέρ πίστεως,” i.e. for our faith and then “υπέρ πατρίδος,” i.e. for our country.

This strong connection of the two concepts followed the Greek people throughout the 200-year history of its freedom. Throughout the many wars that marked its history after 1821, we see an unbreakable connection of the two concepts. Perhaps the most recent one might be the appearance of many visions of the Theotokos during the Greek-Italian war of 1940. Thus, this strong connection of “πίστις and πατρίς” is kept strong and alive throughout the millennia and became even stronger with the decision of the new Greek state to display it in its blue and white flag with the cross on it.