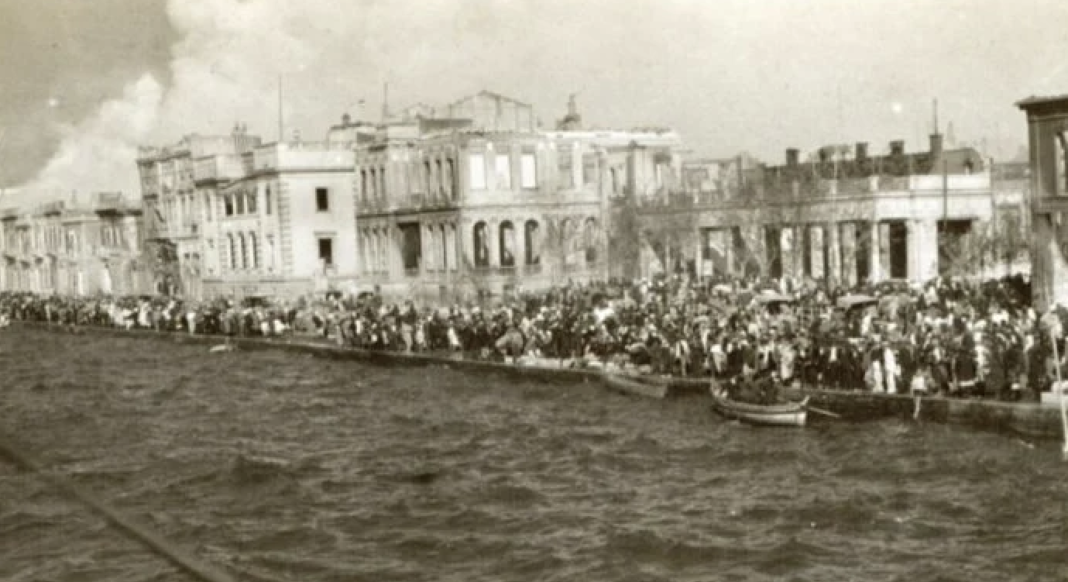 In 2007, the European Court of Human Rights concluded that the act of genocide is the intent to destroy a national, racial, religious or ethnic group. This was the goal of the Turkish Army, during the dark days of early October 1922, of which we celebrate the 100th Anniversary, this year. Of course, this genocide did not happen overnight. This was a calculated plan that was executed with precision, all under the direction of Nureddin Pasha, General of the Turkish First Army, who was receiving specific orders from Kemal Pasha Attaturk.

Within a matter of days, from September 13 – 22, 1922, an estimated 125,000 Greeks and Armenians were massacred. Approximately 400,000 Greeks, Armenians, Assyrians and Jews were displaced. The city of Smyrna was burnt to the ground. All in an effort to erase everything that was associated with anything other than being Turkish.

This campaign began, a few years earlier, as the Ottoman Empire was in total demise and with the Turkish troops committing genocide in Pontos. There, Kemal Pasha Attaturk showed his military might and was successful in removing the Christian population, either through displacement or martyrdom. Attaturk believed that the Turkish race had to be purified and all those who polluted the race with their presence should be eradicated. For him and his followers, it was totally acceptable to murder, outright, or send the captured people on death marches.

When the campaign came to Smyrna, the situation was a bit different. From May 1919 until September 9, 1919, the city had been under the control of the Greek Army, which had landed there to protect the population, but also to be a base for the Greek Armed Forces, as they pressed their way through Asia Minor. Their efforts were in vain, due to a number of factors, which we shall not discuss, now. The effort to take back Asia Minor from the Turks ended in total defeat. Thousands of Greeks, Armenians and Assyrians were displaced, or sent on death marches. When the Greek troops exited Smyrna, the Turkish Army was waiting to enter.

While there are accounts of the first days of the Turkish occupation, noting then to be somewhat peaceful, it was a matter of time before the barbaric nature of the soldiers took over. On September 9th, the Turkish troops began to attack Armenian businesses and homes, while molesting the female population. During the midst of this, the Nurredin Pasha summoned the Metropolitan of Smyrna, Chrysostomos, along with the leaders of the Greek minority, whom he accused of treason, inasmuch as Chrysostomos, having been born in Tryglia ( modern-day Zeytinbağı), Asia Minor, was a citizen of the Ottoman Empire, and as such could be accused, due to his ministering to all those who came to him, many of whom were Greek troops. Nurredin Pasha, in an effort to assure the martyrdom of Chrysostomos, gave the bishop up to the fanatical mob that was waiting outside of the Turkish headquarters, where they proceeded to beat him without mercy, dragging him down the street, ripping his beard out, stabbing him, gouging out his eyes, cutting of his nose and ears. At some point, a soldier took mercy on him, and shot him, as some sources say. During that same time period, out of the 459 priests in the Metropolis of Smyrna, 347 priests were martyred, along with Bishop Ambrosios of Moschonision, Bishop Euthymios (Agritellis) of Zela, Bishop Gregorios of Kidonion, and Bishop Procopius of Iconium.

While all of this was going on, the Turkish troops set fire to the Greek and Armenian neighborhoods, literally running the inhabitants into the sea. While there were ships from many nations in the harbor, access was cut off to the harbor, by the Turkish troops. Some people found ways to jump into the water, to escape the fires. Some managed to get aboard ships and lifeboats. Thousands died.

After the fires were extinguished, everything was ash. The entire infrastructure of the city had been lost. Almost every trace of Greek or Armenian presence had been erased. These populations had been eradicated from Smyrna. Today, in place of the Greek and Armenian neighborhoods, a park has been built… with no mention, anywhere, of what once stood there. The genocide was finished, in that city.